If you missed it, Games Workshop had their NOVA design studio seminar on Wednesday, which was later posted up on their community site. Not only that, we got an even better trailer!

Now that’s a lot of new information to process. I’ll be going through what was shown and comparing it to what I guessed at in my previous article.

Apart from being a deeper level of Shadespire, Nightvault was an ancient prison and evil laboratory used by the Katophranes to conduct twisted experiments. Due to Nagash’s Necroquake (shockwave of Death magic in Age of Sigmar basically) it was unlocked, releasing untold horrors. What resides in its dark depths? Only Nagash truly knows.

Personally, I really like this. It connects Underworlds even more to the Age of Sigmar universe and shows how the narrative can have ramifications on each. As well as this we get to see a darker side of the Katophranes. Previously they were presented as peaceful and idyllic so it’s nice to see they used their technology in different darker ways.

Most importantly, all cards from Shadespire (including the Leader Pack) are fully compatible with Nightvault. This is good and bad. Good because it means everything you bought previously is useable without needing to invest in season 2 if you so wish. You can stay fairly competitive with your currently collection and not need worry about purchasing it all over again.

However this isn’t that great at the same time. As I said earlier, I omly wanted faction specific cards and leader cards to carry over. This because it becomes more difficult to balance the game now that Nightvault will bring Underworlds to 1,054 cards in total. With 557 cards for season 2, how many will be unique and not copies of cards we have currently? More importantly it’s more likely to see power creep as the new cards will have to be better than what we already have to help encourage buying the cards for Nightvault.

Now I know this is coming from more of the competitive side of the community but Warhammer Underworlds is marketed as a competitive gaming system. Now this is not to say we could see tournaments induct different rules for what cards can be used going forwards but I feel season-locking cards helps the game stay fresh and balanced. Especially when you consider we’re getting around 6 months of Shadespire with all 437 cards.

As guessed by a lot of players, Nightvault has magic implemented into the core game. How does this work exactly? No idea. BUT THAT DOESN’T STOP ME FROM GUESSING!

Let’s take a closer look at those 2 new cards. Now focus on the contents of the boxed set below. 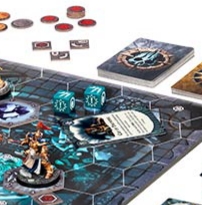 With the details from the community post, magic involves the new dice above (interestingly, as a side note, all the dice are cubes with no rounded edges like we currently have) along with new magic cards. They have their own symbol, so it will be interesting to see how they fit into current deck building. Will the number of cards we draw go to 6 in order to have a 24 card deck? Do you still need half the power deck to be upgrades? Will magic cards going into the power deck or their own separate deck? If they compete with ploy cards, magic will have to be very strong.

Onto magic itself, looking at Averon’s card again it shows that he has a number value to the left of it which are shown on the magic dice. Considering his magical attack has a blank stat and the magic card has 2 symbols on it, perhaps magic is dependant on the caster. For example you roll as many magic dice as shown on your fighter card and then spells have symbols you need to roll depending on each one. So Averon’s spell can be cast with any number of dice while Cry of Thunder needs you to roll 2 symbols, making it more difficult to cast but having the advantage of being more damaging. Some fighters could only have 1 dice to cast magic with whereas others could use 3 or more.

I’m not sure how magic is going to work exactly and all the above could be wrong. I’m sure magic will take an action to use but does that means more tokens too? Can you move then cast magic like a charge action? It’s all very interesting and I can’t wait to see how magic fits into the game.

MORE new cards! If you look at the Drift ploy card to the left, it says push all friendly [fighters]. Now this could be away or towards enemy fighters but this would be insanely good as a neutal card if it isn’t for the Chainrasp warband. All I know is that I thought that there would be never be a card to top Earthquake back in the early days of Shadespire. Then Great Concussion happened. I don’t know about you but if I was Great Concussion, I would be worried.

Also magic cards have types it seems like the Gambit Spell (symbol) entries. Will we get different spells? Offensive as well as buff spells? All I know is that I have too much information to speculate about.

Also, the game board still has 5, albeit new, objective tokens and the 4 activations appear to remain as well. No new blocked or lethal hexes on the show boards but I’m sure they’ll have something on the other sides. They do look very beautiful though and you all know how I love boards. The new starting hexes will be very interesting indeed.

Once again Death steals the show with their miniatures again. The Chainrasps look amazing with so many details and characteristics. The Briar Queen, while a smaller version of Lady Olynder, looks beautiful. Some people have complained about the similarities but, after all, Skritch was a smaller version of the Forge World Vermin Lord in Shadespire and the imagery helps link this warband to the Age of Sigmar Nighthaunt army. There is a ghost with keys. Maybe it’s the key master, looking for the gatekeeper.

On the gameplay side, it seems all the Chainrasps have the same weapons with nothing standing out like the Reaper or Prince of Dust from the Sepulchal Guard. Of course the Briar Queen will be a caster but will she be the main force multiplier with 6 ghostly meatshields?

I suspect she’ll be able to bring back Chainrasps with magic and I suspect they will inspire by coming back from the dead, although I really hope not. Either way I’m eager for this team, especially if they’re movement 4 or more.

Evocators. GASP. While the leader, Averon Stormsire, looks great, his other 2 warriors just look a bit plain and feel like normal Evocators. When compared to Steelheart’s Champions or the Farstriders, each of those warbands looks more unique compared to their Age of Sigmar variants. I would have liked this warband to have more unique pose or even more bare heads. They look good, they just don’t stand out.

Gameplay wise, we actually have a lot of info on these guys. Let’s look at their cards again.

Familiar Stormcast profile. 4 wounds, movement 3, damage 2 hammers and defends on shields. A, probably, easy inspire mechanic with ranged threat as well. You may think that’s all we have BUT WAIT, THERE’S MORE! 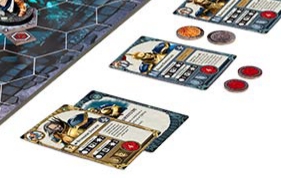 Now if you focus, you can see that when Averon inspires, he gains an additional defence dice like all Stormcast and his spell goes up to damage 2. A spell card is also attached to him like an upgrade card but this could just be for display purposes. I can barely make out the card stats to the right but it looks like it is damage 2 in melee with a damage 2 magic attack. Very interesting indeed.

That’s it for new warbands at the moment, as well as all the information we were given. I won’t be talking about Nighvault again until I get it in my hands unless the new mechanics are fully revealed and explained.

Oh yeah, there was one more thing.

Flying Squigs! It is vengeance, it is what rolls crits in the night, it is…BAT SQUIG!

3 thoughts on “Nightvault: With a Vengeance”