What deadly powers have been unleashed?

What a season it’s been for Warhammer Underworlds! The new rules, warbands and mechanics have really shaken things up. Yet as Nightvault draws to a close it still has one more secret to unveil; Power Unbound! This is a 60 card expansion box containing faction cards for all the Nightvault warbands as well as a selection of universal cards that anyone can use. This was given to me for free by Games Workshop so thanks once again for choosing me to review this product. Now on to the cards!

Power Unbound has 24 faction cards for every Nightvault warband. Each one gets 3 cards just for themselves comprising of an objective, gambit card and upgrade card. As such I’ll just review each faction’s cards because of the more “personalised” nature of this release. 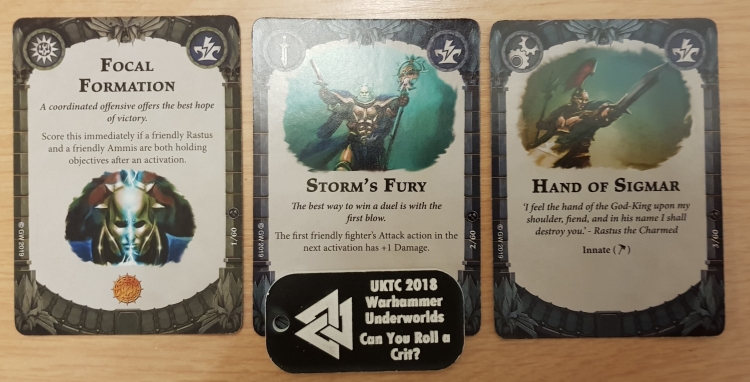 Focal Formation is a pretty bonkers card. Hold objective cards wish they were this. Forces you to dedicate Ammis and Rastus to capturing objectives but is great for non-aggro score immediately glory.

Storm’s Fury is Stormstrike but better as it has no range restriction. Stack both cards together or run the former for bust damage with Stormsire.

Hand of Sigmar is our fist innate smash card. With their 3 smash attacks and re-rolls it is not really needed but still a solid upgrade. 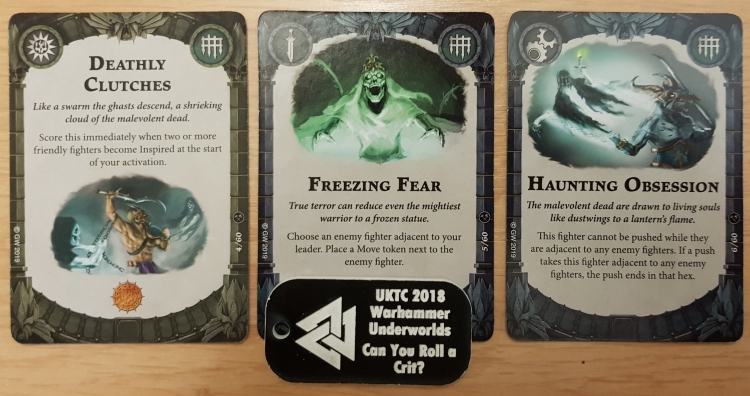 Deathly Clutches is an objective I really like as it rewards positioning and is just a rather reliable non-aggro score immediately objective. Compliments Death Sentence nicely too.

Freezing Fear would be great if Transfixing Stare didn’t exist.

Haunting Obsessing turns a ghost into glue. Has interesting applications with hold objective play but basically guarantees your fighter won’t be pushed away once they get adjacent to an opponent.

Petty Vindication is alright but just a bit eh at 1 glory. Rather easy to score however.

Leaping Loon is funny but not great. Good if you can predict when your opponent is going to attack your leader. Still it will save Zarbag from at least 1 charge.

Really Pointy Stick is decent but I would have preferred it being 2 smash or 3 fury.

Eyes of the Nine 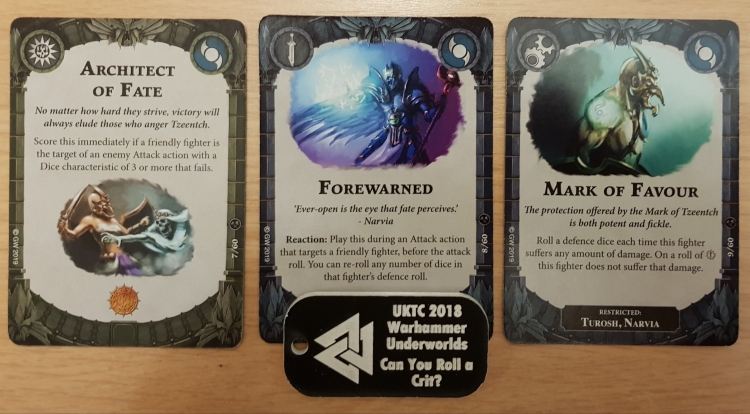 Architect of Fate is Miraculous Escape. Fine but it’s still not easy or reliable to score. Helped by cards such as Rebound and Last Chance.

Forewarned is nice with that defensive re-roll and it’s a reaction too so no need to declare it first in a preceding power step.

Mark of Favour is…not great. Eyes of the Nine need many things but durability buffs for Narvia and Turosh is not one of them. 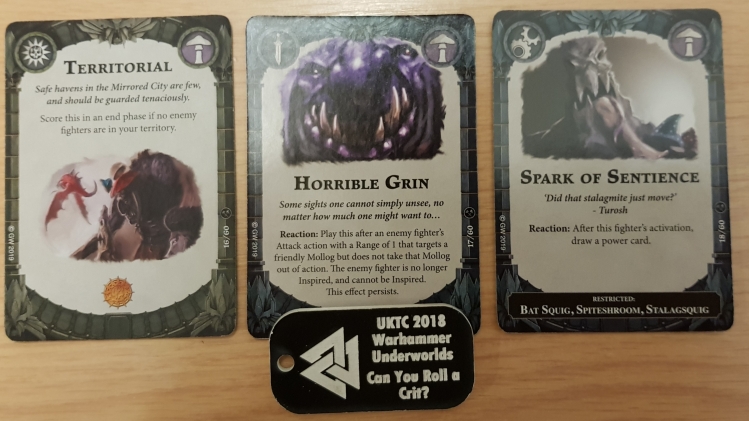 Territorial is great. No one really comes to Mollog. Just watch out for those pesky meddling kids with Faneway Crystal and Hidden Paths.

Horrible Grin is a frightenly good card. Balanced out by being range 1 attacks only but still devastating when it goes off.

Spark of Sentience is a potentially busted draw card. Put it on the Bat Squig to go on guard, charge, draw 2 cards while scoring Change of Tactics as well as Keep Them Guessing. 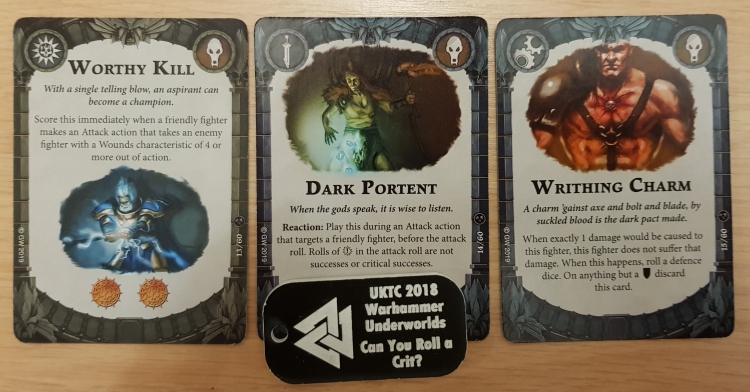 Worthy Kill is A Worthy Deed but…gives you 2 glory instead. Er. It’s the exact same card but gives you more glory. Do not question this, run both.

Dark Potent turns off crits and thus I hate it. Still it’s really good as a reaction your opponent can’t anticipate and messes up with objectives like Headshot.

Writhing Charm is the plink damage shield. Helps counter a big weakness of the Hunt. 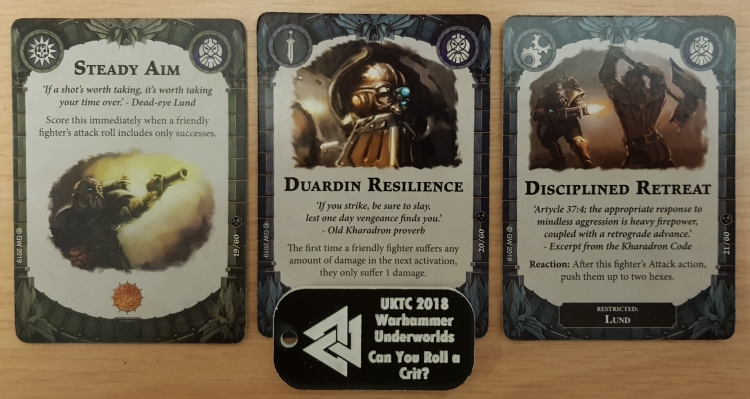 Steady Aim seems good on paper but you actually only have a 25% chance (THANK YOU POWER OF MATHEMATICS) of scoring this with a 2 dice smash attack. Of course this improves the more supports you have but it is not as reliable as you may think.

Duardin Resilience is Insensate. I love it. Soooooo good.

Disciplined Retreat is nice and it always goes off but being restricted to Lund is not ideal. I’d still go for Duellist’s Speed or Blessing of Hydragos. 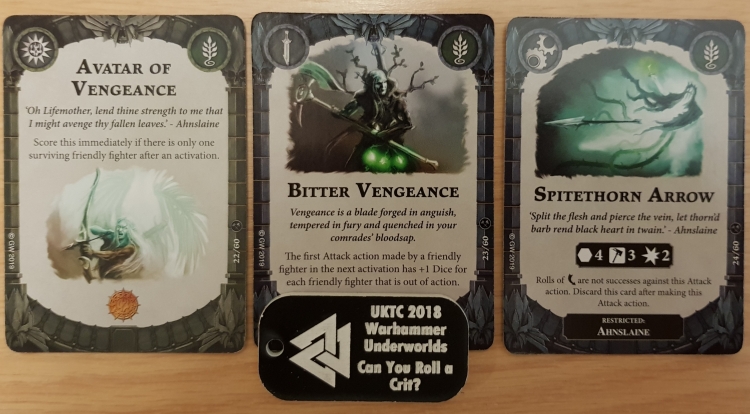 Avatar of Vengeance is a very narrative card but it’s not good as generally you don’t want to be playing towards only having a single fighter left.

Bitter Vengeance is solid but I prefer Determined Effort and Haymarker that work instantly and aren’t dependent on friendly fighters being out of action.

Spitethorn Arrow is a living seeker missile. Destroy those pesky 2 wound fighters hiding behind dodges. Even then at 3 smash and 2 damage with 4 range hurts everyone despite it being a single use attack.

Now we get to the juicy stuff! Power Unbound contains 36 universal cards and I’ll be going through them from objectives all the way to upgrades. 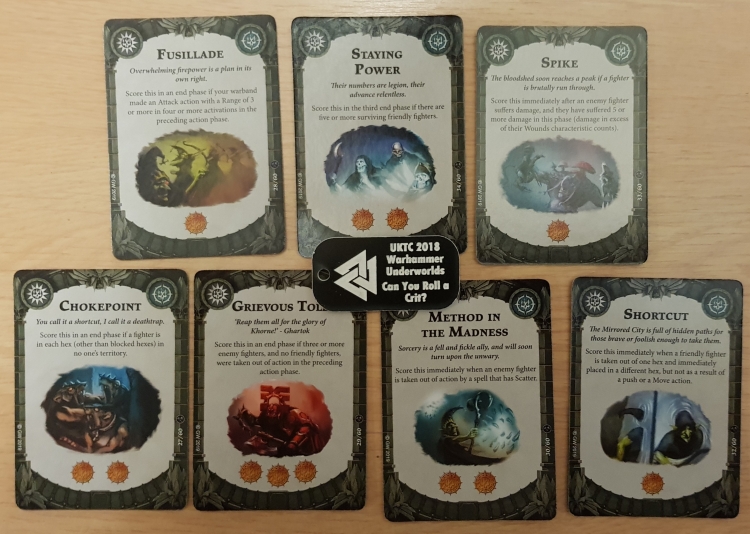 Shortcut is alright but can only really be scored by Confusion, Hidden Paths or Shifting Reflection. Interesting but not too easy achieve.

Spike is like Massive Assault but easier. Good but not too reliable. Depends on the warband and how much damage they pump out. Easy for Mollog once he gets upgraded but better for warbands with multiple 3 damage fighters.

Fusillade should have been called Keep Shooting. Alright but if you’re going for this then Keep Chopping is better.

Staying Power is basically too hard to score. Everyone dies so quickly now that the horde warbands who benefit from this won’t survive to get the objective.

Grievous Toll requires you taking 3 enemy fighters out of action in a single action phase. Annihilation is better.

Chokepoint is an interesting card. More beneficial with extremely diagonal or long boards but your opponent can play around this by going wide. I like it but need to do more testing to see how viable it is.

Method in Madness is great but just unreliable. Need more scatter spells in the game for it to be better. 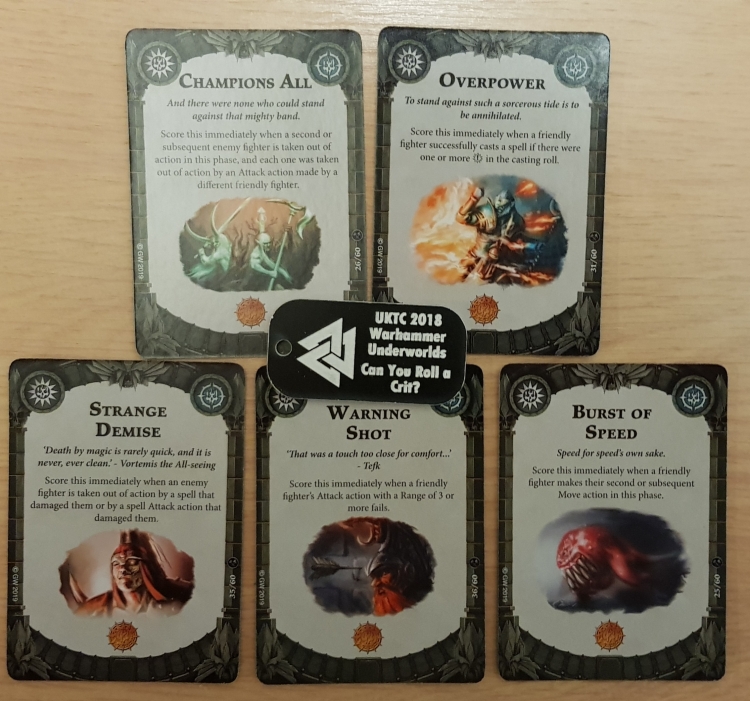 Warning Shot is silly and I love it. Get rewarded for missing. Great for ranged warbands but especially those with 2 fury ranged attacks like the Profiteers, Zarbag’s Git and Godsworn Hunt.

Burst of Speed is Longstrider. Mollog players rejoice. Who cares about restricted cards?

Overpower is amazing. Score immediately if you can roll a crit when you cast a spell. Yes. YES. YEEEEEEEEEESSSSSS.

Strange Demise is Sorcerous Scouring. Run both because why not?

Champions All is a great aggro objective. It mirrors faction objectives like Ranger Strike or Draw the Gaze of Khorne. Just has to be 2 different friendly fighters but great for warbands like Thundrik’s Profiteers and Godsworn Hunt. 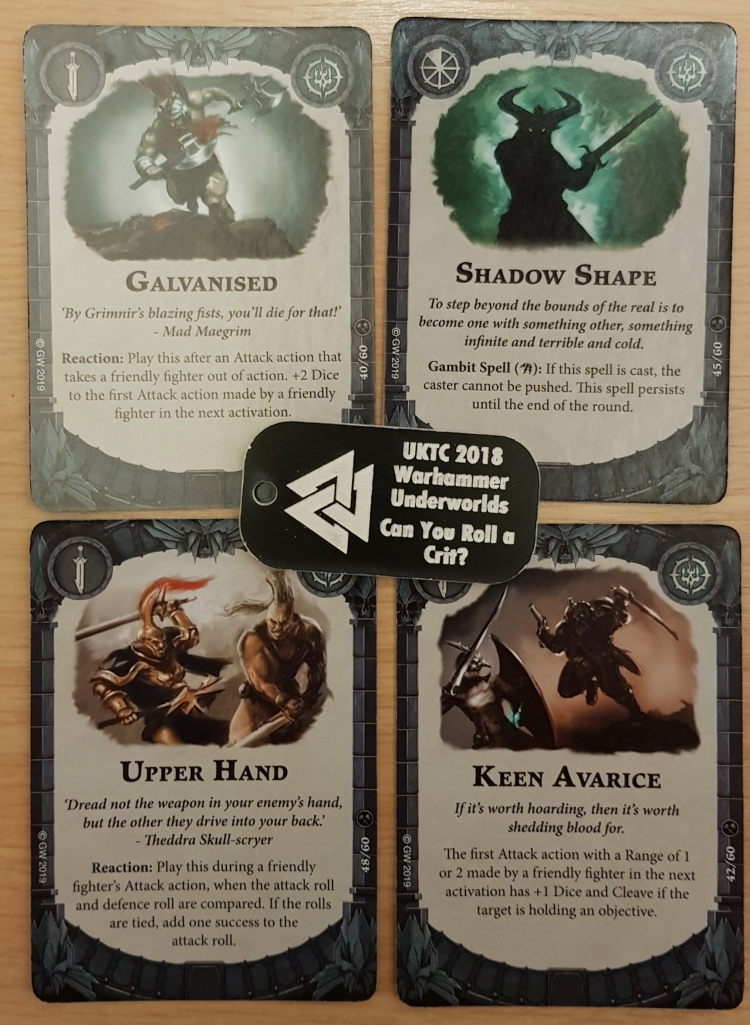 Galvanised gives another +2 dice but requires a friendly fighter to be taken out of action. Not a fan of that trade.

Upper Hand gives you the advantage in a tie. At least it’s a reaction.

Shadow Shape is a really nice spell that prevents the caster from being pushed. Shame it doesn’t say choose a friendly fighter instead as that would have made it amazing.

Keen Avarice helps against those pesky fighters holding objectives. Solid card but depends on how many people play hold objectives. 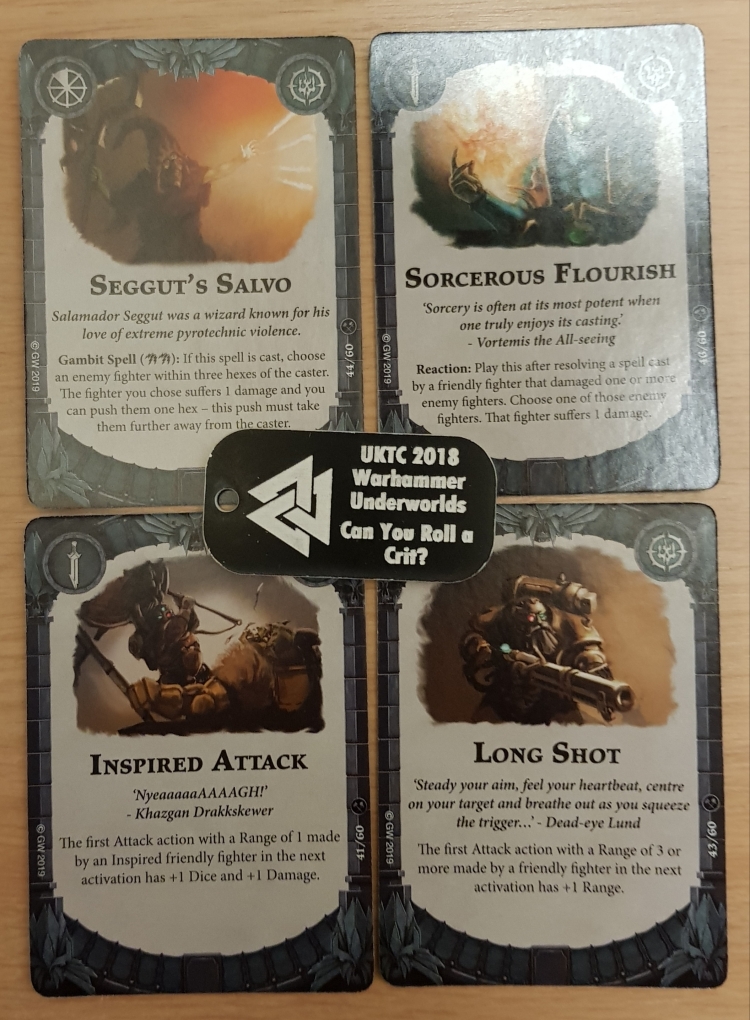 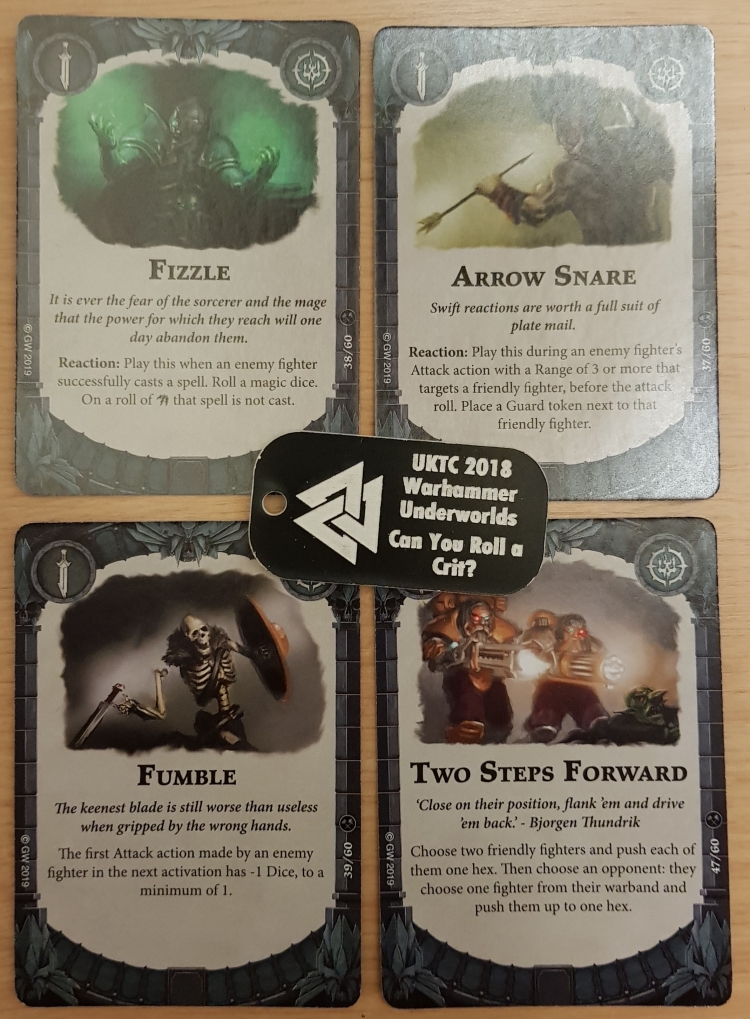 Seggut’s Slavo is a damage and a push combined into a single card. Amazing. Offset by having a range of 3 but combine with lethal hexes for even more damage.

Fizzle gives you a 50% chance to stop a spell. I like it.

Two Steps Forward is a twist on Quick Advance. Balanced and fun.

Fumble forces -1 dice for the next attack. Great against Mollog and other 2 dice fighters like wizards.

Arrow Snare is surprise guard. Great with all the range 3 attacks everywhere.

Inspired Attack only works on inspired fighters with range 1 attacks but that +1 dice and damage is tasty.

Long Shot boosts your range for 3 ranged fighters or great. Range 4 Thundrik or range 5 Farstrider anyone? 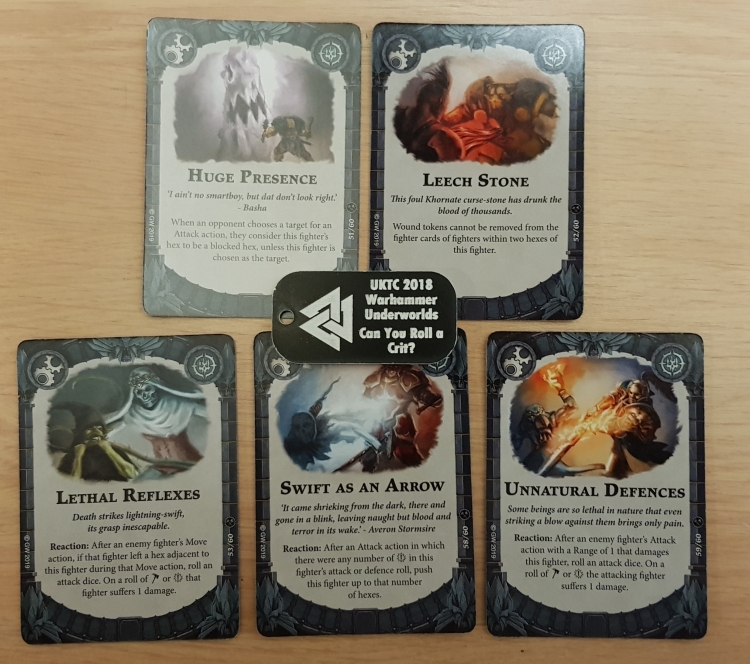 Unnatural Defences has a 50/50 chance of doing 1 damage back to a range 1 attacker. Not too great.

Swift as an Arrow appeals to my crit side. Great at dice heavy attackers adn defenders but just not reliable enough.

Huge Presence makes the fighter a big wall for your friendly fighters. It’s okay but difficult to use effectively.

Lethal Reflexes punishes moving away from your fighter but that’s so rare, especially as Quick Thinker is banned. 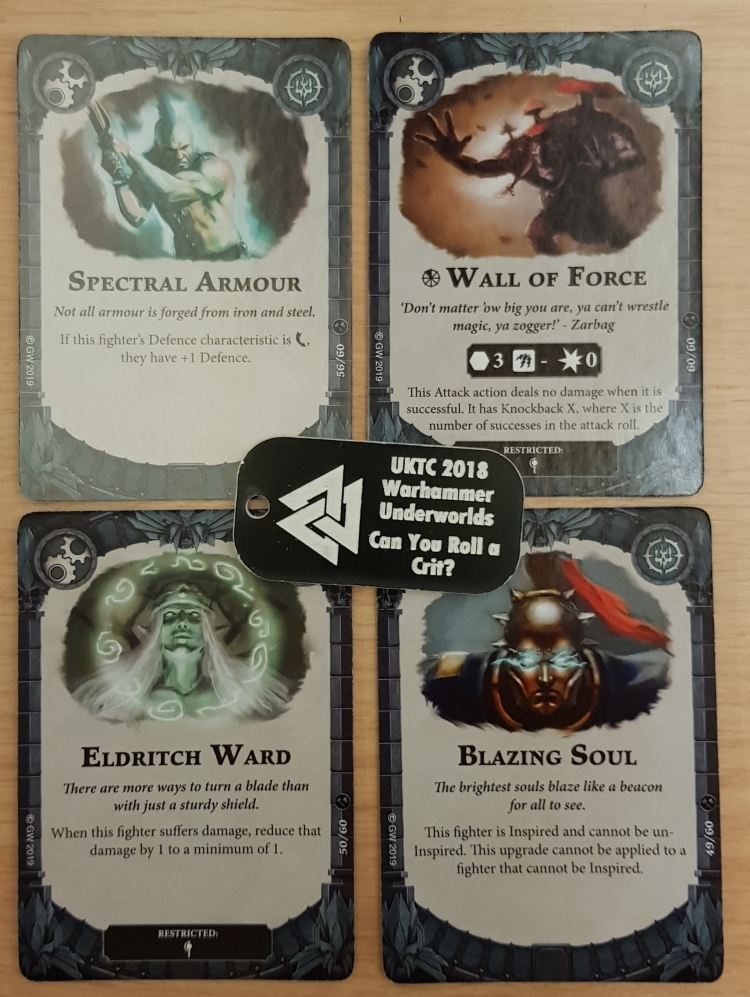 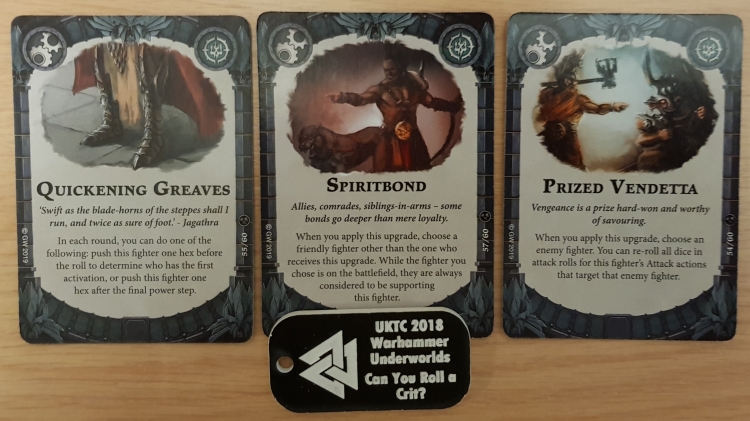 Spiritbond is amazing. As long as the second fighter is alive you get to always be supported. Very versatile and stacks with other supports.

Prized Vendetta for when you really want someone dead.

Blazing Soul allows for your fighter to always be inspired. Great for Farstrider, Grimnir and any other fighter dependent on inspiring. Can’t be turned off by Cruel Taunt but can’t be equipped to a fighter already under the effects of Cruel Taunt and Maddening Cackle etc.

Quickening Grieves is how Regeneration should have been. Either works at the start or end of a round so you always get use out of it.

Spectral Armour is Acrobatic but solely works on dodge characteristic fighters only. Double up for insane dodge power.

Wall of Force. FUS RO DAH!! A reliable spell attack action that does no damage but pushes the target far away. Great for magical objectives and Get The Hence.

Power Unbound is…amazing. Would I recommend buying it? Yes. All of the yes. I would have bought it if I didn’t get it for free. The cards in this pack are a huge departure from the Leader Expansion. My only and main criticism is that the cards here are waaay too good so game balance is potentially at risk. Still it looks like a solid bunch of cards that everyone will find useful. You can buy your own copy direct from Games Workshop here.

Biggest losers are Eyes of the Nine, Zarbag’s Gitz and Ylthari’s Guardians when it comes to faction cards. Thundrik’s Profiteers, Stormsire’s Cursebreakers and Godsworn Hunt are the big winners in regards to faction cards. Everyone gets buffed from the universal cards.

And there you have it. I hope you enjoyed my review of the last Nightvault expansion. It definitely ends with a bang. If you do share the card pictures all I ask is that you don’t edit out the watermark and just credit my site. Either way season 2 has been really fun and we have a few more months to enjoy all the cards at our disposal. All that’s left is to look forwards for season 3. I hear it will be full of crits 😉