Sometimes speed is everything

Reactions. Love them or hate them, they’re a big part of the game. Today I’ll be rating a selection of reaction cards that are popular and useful in the game.

There are a wide range of reactions in the game. They most commonly occur in ploy cards but also upgrades and even fighter cards too. The greatest thing about these effects is their speed by being played immediately and interrupting your opponent. However, this is also their greatest weakness via the specific triggers they need in order to be used. You also have to keep in-mind which player has priority as only one reaction can be played per trigger.

I’ll be rating ploys mainly via their use of use/trigger. The easier the better. Then I’ll factor in their effect(s). Sometimes even a tough trigger can be countered with a really strong effect.

Easily the best reaction in the game. Now while it can be argued whether it’s needed to draw 2 cards instead of some other ploy, Duel of Wits has the easiest trigger in the game. You can even play it against your opponent using Duel of Wits! Simple, effective and strong.

2nd place belongs to Quick Thinker. While it has a super easy trigger, it can be hindering if all your fighters have moved or only one fighter (resulting yourself in a bad position). Despite that, the card is still amazing. Use it to get free moves or deny charges.

There was no way I was not going to mention these 2. Both cards trigger off almost the same effect (the slight difference in wording is important) and so can be played together. In combination they make no fighter in the game safe from being 1-hit, even on their own these cards are incredibly good and have had a huge effect on the game.

You Thought You Were Safe

This card is one of my favourites. It’s trigger is quite specific and the card is effectively useless if you have unspent glory and/or no upgrades in-hand. Still, the free move or attack is so powerful that it is an auto-include to most people.

This covers all cards that save your fighters in some way. While they won’t always work, saving a fighter from death is always huge. Soul Trap itself can even deter people from attacking the equipped fighter due to the risk of said fighter staying alive. You always gamble with the 50/50 effect but when it works, your game can turn around dramatically.

Misdirection. Some people swear by it, some swear against it. While it does have a great effect, the trigger is very specific. It only works with enemy ploys that choose a fighter and so is useless if your opponent runs none of those or the choose effect is so specific that it can’t be allocated to another friendly fighter. Although being able to bounce of Distraction onto another friendly fighter is always great.

Similar to Misdirection, Rebound suffers from only working a third of the time. A very powerful card but also very risky. Sometimes it’s better just to take another ploy that will always work over this card that will sometimes work.

Another good reaction card that suffers from being a 50/50 card. A strong effect but let down by not working all the time. It has a super easy trigger but, once again, you’ll probably want something that works all the time. 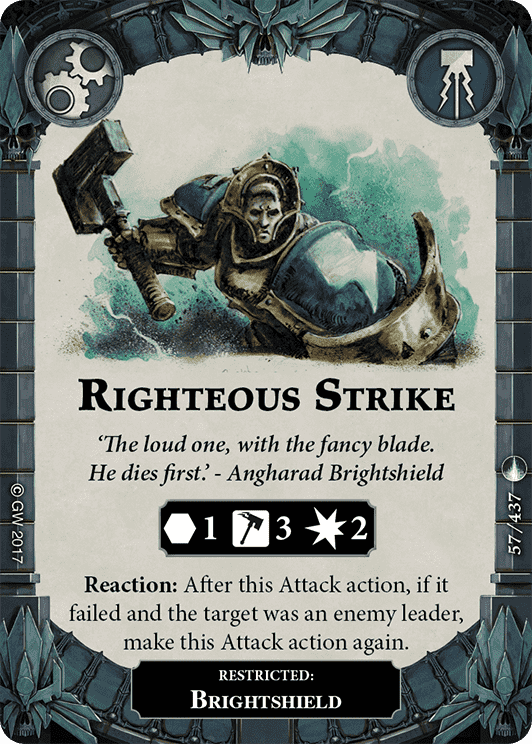 Now I decided not cover warband-specific cards because it would make the article too long but I couldn’t leave out my favourite reaction-loop in the game. All your need is 1 Brightshield and 1 lonely leader to keep on attacking until the action is successful 😂

Anyway, there you have it. My ratings of universal reactions. While a lot of people may not agree with what I’ve said here, it gives a fair look at the pros and cons of the most prevalent reaction effects in the game. Hopefully it helps you with your tactic planing and deck selection, as well as maybe even the rolling of more crits.