This Sunday I was back at Wayland Games in Hockley to play at their Shadespire tournament. Last time I came here I placed 3rd so I was looking for another win. I had planned to use my next warband the but there were 2 big problems: I hadn’t played any Shadespire since my last tournament 2 weeks ago and everyone at the event was really good due to how much they all improved over such a short period of time.

As a result, I defaulted back to my Skaven. To compensate for this I was testing out a new card from the leader pack (Shining Example) and using the new boards. I had a good look at both new releases the day before so was itching to use the new tactics I had come up with. I was most excited by the board, it’s just so good and refreshing.

The tournament had 9 players so there was a buy in-play. Regardless it was shaping up to be a tough but fun event!

Adam and his Fiends were my first opponent. Khorne (of both varieties) are the hardest match-ups for Skaven so it wasn’t going to be easy.

Game 1 began with me winning deployment. My opponent placed “the Forge” lethal board and so did I, with a small choke-point. I placed my objectives on the lethal hexes (because it’s legal, for now 😂) and we started. I was able to move out of range for the charges and lure the Fiends into the top right of my board. Skritch took a charge from Riptooth charging through a lethal hex. With 1 wound left I played Bodyguard for a Price and then Ready for Action to move next to Skritch at the end of 1.

Phase 2 began with Skritch charging back and killing Riptooth thanks to Great Strength after the dog used Healing Potion. Krrk took a charge and died but pulled the Fiends out of position. I killed another thanks to Shadeglass dagger and maintained the lead.

In phase 3 I pulled back deeper into my territory. Magore charged into Hungering and whiff’d but his last Fiend finished the job. However now the Khorne warriors were too deep into my territory. I used Hidden Paths to stop Denial and had A Destiny to Meet on Skritch, resulting in a 15/6 win.

Game 2 started with me winning deployment again. I stuck with “The Forge” board as it had done me well in the last game. Phase 1 was a lot tighter, no kills but I was able to score a few passive glory to take the lead. Phase 2 started with a charge from the Fiends that killed a clan rat and boosted their glory up to 3 immediately. I lost another clan rat along the way but managed to kill Riptooth and another Fiend.

Krrk died in phase 3 but I was able to avenge him by killing Magore. With Skritch out of activations and my clan rats not willing to attack a damage 2 reaction attack fiend, I ran away in a traditional Skaven manner. The game ended with a close 11/7 win to me.

Adam was a tough opponent with a greatly painted warband. Game 2 was a lot closer but he was let down by the fact that I won deployment each time and decided how the boards would he setup. 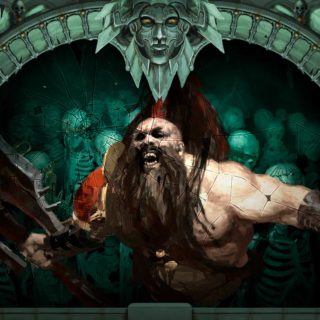 James was my next opponent. When we last played at Wayland Games he was using Skaven, this time he had Garek’s Reavers.

Winning deployment, the game started off with me letting my opponent go first. Karsus charged in and killed Lurking. I then brought him back after killing Targor. Skritch then killed Karsus and used Illusory Fighter to teleport over to Garek.

Phase 2 started with Skritch knocking Garek down to 1 wound, he then hit back and killed Skritch thanks to being inspired and having Incredible strength. I managed to kill Targor and then ran away with Krrk and my last 2 rats, leaving Saek by himself in his own territory.

For phase 3 it was a stand-off as it was 5/6 to James. I bided my time then used my draws to teleport a rat over to enemy territory with Hidden Paths. I then used A Destiny to Meet to help me unlock Escalation and net me just enough glory to win 9/8. Phew.

For phase 2 I won deployment but lost pirority and Lurking Skaven was charged by Saek, crit’d and then crit’d him back for 1 damage. Karsus charged in and whiff’d, Lurking then hit him back for another damage. Arnulf ran in and did 1 damage to him, then Krrk charged into Saek and whiffed. Skritch then ended the phase by killing Arnulf and unlocking my glory train.

Losing priority, Krrk survived being charged by Saek thanks to crits and Skritch killed Karsus. Garek then charged in and killed Krrk who was then avenged by Skritch, scoring Skritch is the Greatest and Victorious Duel. I lost a few more rats along the way but was still in the lead at the bottom of 2.

For phase 3 I charged and killed the last Reaver. We then cycled through cards and I managed to score a ton of glory despite James’ 7 glory swing which I meant I won 17/13. It was a tough set as James has improved so much since we last played and it was his first time using Reavers! After a brief chat for suggestions, I think he’s set on something very strong.

For the final round I was paired against a fellow John using his Fiends, it seemed today would be a Khorne day.

Game 1 started off with me losing deployment. Using cheeky combos of Quick Thinker and rolling crits, I managed to avoid/survive charges and ended phase 1 killing one of the Fiends with Skritch, putting me 3 glory up to 0 thanks to Shining Example.

Phase 2 started off with a charge from Riptooth, knocking Skritch down to 2 wounds. My opponent then played Shardgale and Skritch was left on 1 wound. Thinking nothing of it, I held back my Great Concussion and then he played Reflected Injury, killing my boss man. Festering Skaven was then killed by Zarkhus, Hungering charged into Riptooth doing 1 damage and then Krrk charged in, rolling a crit but beaten by a crit and a dodge. It was now 6/6 each.

Losing priority in phase 3, Hungering was killed by Zarkhus. Krrk attacked back at Riptooth and killed the dog. Thanks to Precise Use of Force, I got 2 glory and cycled through the objectives. Biding my time, I drew until I had 2 more upgrades. My opponent had already played 1 and I had 2 spare glory. In the final activation, I used Hidden paths to inspire and move Krrk, then gave him 2 more upgrades. With the use of that and denying a potential Denial, my opponent scored nothing and I ended up with a cheeky 12/7 win.

Winning deployment this time for game 2, I made a normal board with a small choke-point with Krrk behind the 3 hex wall. I baited in Riptooth who failed to hit with his charge. I then struck back with a supported Skritch, doing 2 damage and pushing Riptooth away. Krrk then charged in but failed. John played Second Wind and I then used Illusory Fighter to put Krrk 1 hex away. He then countered with Earthquake and brought the 2 together again. He attacked but failed, pushing Krrk away. Using Time Trap, Skritch charged in and killed Riptooth, scoring Skritch is the Greatest. I then combo’d it with Ploymaster, Shining Example and Master of war to net 3 more glory which put me 5/0 ahead.

In phase 2 the rats moved up. Dodging another charge with Quick Thinker, Skritch dispatched 2 more Fiends before Magore was brought down by a Shadeglass Hammer to the face from Hungering Skaven with a crit and a hit. The phase ended 14/6 thanks to Escalation on both sides and a valiant death from Krrk. Phase 3 was a cycling affair and I got the cards I need to score 4 more glory and end up with an 18/8 win.

A very tough set of games. John is an excellent opponent and was let down in game 2 when Riptooth failed with both attacks but such is the way for an aggro player. Still his positioning was very good and had a good few sneaky tricks of his own. 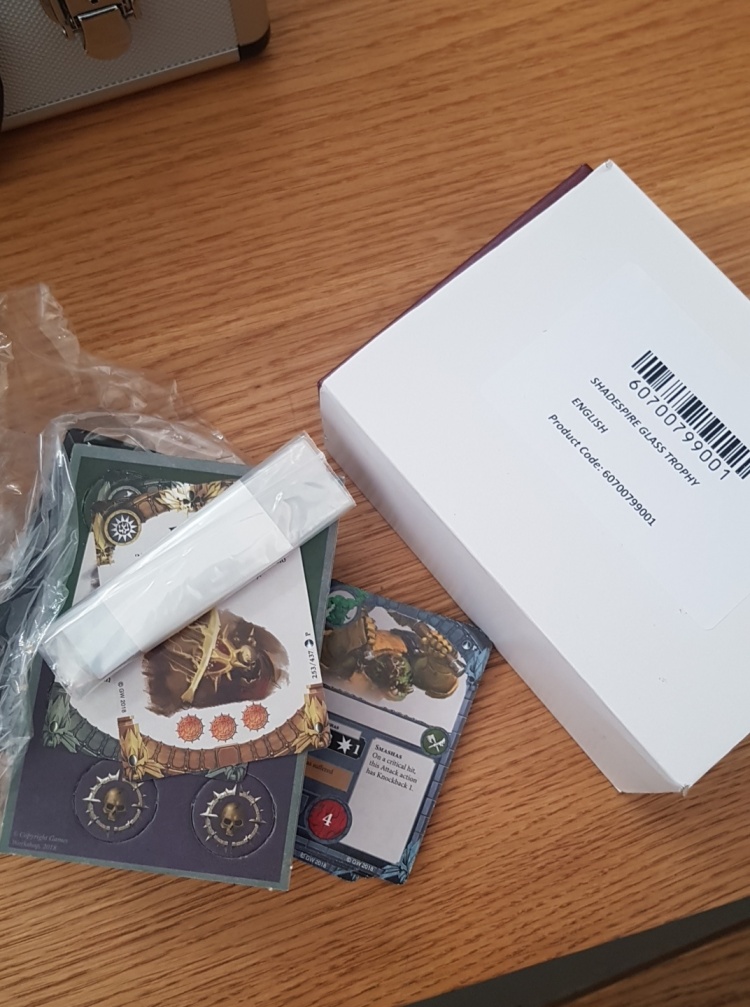 After the results came in, I had won! It had gone to glory difference and I took the win. I was closely followed by a great chap who was playing Fyre Slayers. Sadly as we had 9 players, he got the buy in round 1 which meant he didn’t get enough glory for his differential but alas such is the way of tournaments. Still, once again had a great time at Wayland Games and I totally recommend coming down for their events or just casual gaming. A great gaming centre with an amazing crowd of local friendly gamers.

With my 9th trophy for my 9th tournament round-up, I’m hoping to get more gaming time to test out some new warband plans I have. I love playing Skaven but I do want to use the other warbands at events, I just need to get some practice in first. Meanwhile, tune in for later in the week where I’ll be doing my reviews on the new Leader Cards and then the new Lethal Boards. They’ll be more exciting than rolling crits.