How big an impact will the new boards have?

My favourite of the new releases has to be the Shattered City Board Pack. Positioning is always the most important part of the game and board placement as well as selection is often overlooked. While it has always been another level of tactics, for 8 months we have had the same 4 boards compared to the influx of new warbands and cards over that time period. How much can 2 boards effect the game?

Giant metal cogs form the centre of the board with a blue glowing crystal in the middle. The lethal hexes appear to be some sort of bladed apparatus.

The big new change added with this release. Lethal Hexes are red-bordered hexes. They cause damage whenever a fighter moves into one or is pushed into that hex. Now while it is only 1 damage, it can be a deterrent to chargers that have to risk taking damage in order to get to grips with the foe.

Another important factor (that will probably be FAQ’d) is that you can put objectives on lethal hexes. Great for aggro warbands to sit all the objectives you control to discourage your opponent from moving onto them, especially when you get all 3 objectives.

Easy fighter suicide is also another, albeit, niche use. Want your own fighters dead? Just repeatedly run through lethal hexes. Not something I would do but it works for specific endgame goals.

Self damage is also a pretty big point. Only have 4 warband members? Great to score objectives that require your fighters to all be damaged without the use of Shardgale now. Great for Orruks who want to get their fighters inspired in the first phase before they get into combat/on the way into combat.

I’ll talk about this board first. It has 2 single blocked hexes and 2 lethal hexes. A fair mix of both that can slow down your opponent while also protecting your own fighters. 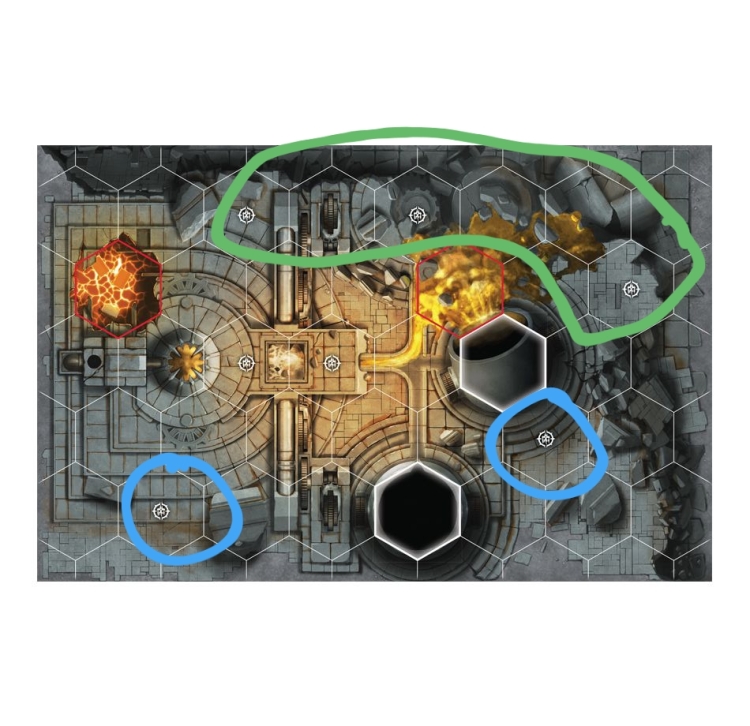 Looking at the starting hexes, I’ll point out what best suits the board. I believe this board is best used as a “reaction board”, especially if playing aggressively. A reaction board is a board you place in response to what your opponent places first.

The above placement is what I feel is ideal for offensive warbands. You have the green circled hexes that are awesome starting hexes. Even if you don’t get priority, you can bait your opponent into charging and punish them with the lethal hexes. The blue circled hexes are good for protecting important fighters as well as decent starting hexes when played in reverse. The right blue hex can use the blocked hexes to help trap in opponents and both blue circled hexes are in support range of 2 friendly fighters.

Despite this, I don’t rate placing this board first if you have to. While it isn’t terrible, the Forge can be punished by a smart opponent and the board suffers when used in length-ways play. However, it does have a great central starting hex, perfect for warriors like the Warden of the Sepulchral Guard.

This board has 3 lethal hexes spaced out evenly apart. It lacks blocked hexes and central starting hexes but offers very good edge hexes and the 3 lethal hexes is something not to be ignored.

Now this is my favourite board. Why you may ask? Simple. The green circled starting hexes pretty much punish anyone trying to play length-ways with you. No matter which side your opponent chooses, you will always have 2 to 3 starting hexes that you can use to get deep into the enemy territory. A great board to use against anyone that you may think will play keep-away.

The other strength of the board is the 3 lethal hexes. Placing this board first means you can place all 3 objective markers onto them if you so wish. Not only that, the starting hexes are still very good against anyone barging into your territory and run the risk of being knocked into any of the 3 lethal hexes.

Using this as a reaction board is great too, although not as good as The Forge board. You still have a very good selection of starting hexes for playing offensively and charging off.

Defensive play is still strong with this board but mainly in length-ways play as you can sit 3 fighters as far back as possible. I feel The Forge is still better for defensive due to its starting hexes and blocked hexes.

Orruks also love this board. You can inspire 3 fighters without losing too much forward momentum while the 4th fighter walks into inspire and protect the backfield. The Forge can do this too but it lacks the number of lethal hexes that are also close to most of the starting hexes.

Just buy the Shattered City Board Pack. I bought it and I’d recommend you get it too. While the price isn’t ideal (I would have liked 2 separate boards meaning 4 board sides in total) it still adds so much to your games whether you are a competitive or casual player. Even if lethal hexes are FAQ’d to disallow the placement of objectives on them, I’d still recommend a purchase.

Board placement is so important in Shadespire and these 2 just add so much more to that aspect of the game. Even after all my games with them, I’m sure I’ve only scratched the surface of their usage and how warbands/players can best get their worth out of them.

I’m so excited that I even plan to make 2 more terrain hexes for The Forge board. Who knows, it could even guarantee more crits 😉