Nightvault brings the Sacrosant chamber to the mirrored city.

Welcome to the first of a new segment of mine: warband reviews. As the title says I’ll be going through the narrative (if there is any), models and cards released with new warbands. I’ll also cover first-glance tactics including deck builds for new and experienced players alike.

While the warbands may seem limited at first, it’s just a side-effect of having access to a small pool of Nightvault cards. Garek’s Reavers had similar issues at first but now come out on top with the full Shadespire card collection.

The Cursebreakers are led by Averon Stoemsire. A veteran Evocator of the Sacrosant warrior chamber, he has decided to venture into the mirrored city with his 2 trusted warriors Ammis Dawnguard and Rastus the Charmed. Together they aim to find a way to unlock the secrets of Shadeglass, using it to refine the reforging process of fallen Stormcast to prevent their comrades from losing their humanity entirely. 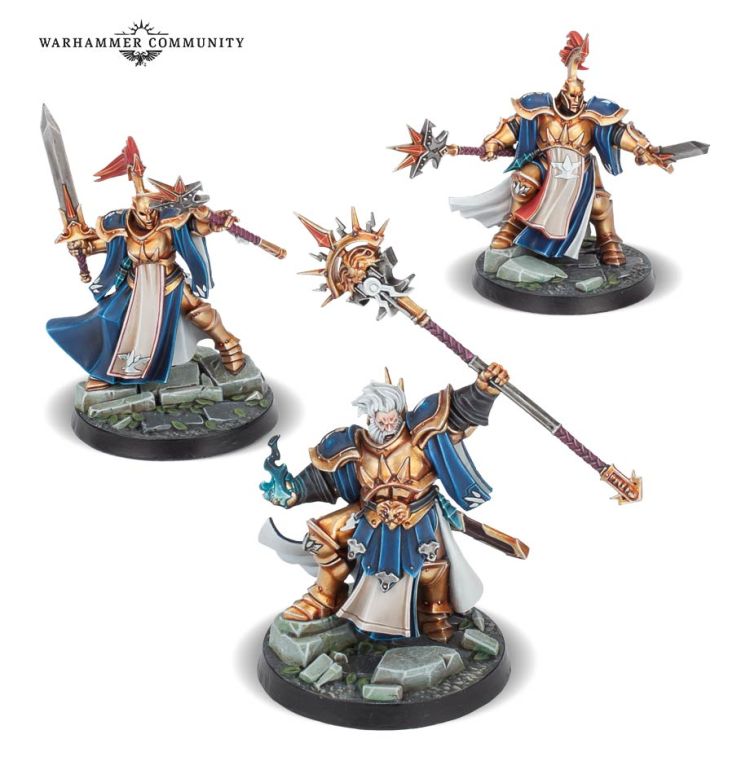 As covered in my Nightvault review, I like the models overall. They’ve grown a lot of me since I first saw them. While they lack the individuality of The Farstriders and Steelheart’s Champions compared to their main plastic kits, Averon is an amazing model and a painter’s delight. They go together well too. 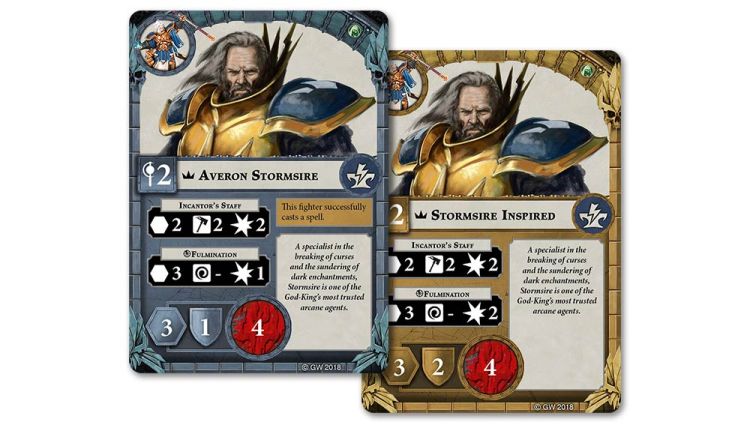 Averon is a great fighter. Range 2 melee profile, range 3 magic attack, easy inspire mechanic and great inspired profile. His Fulmination goes up to damage 2 making him a real threat. As a level 2 wizard, he’ll be your main caster as well. A very flexible warrior indeed. 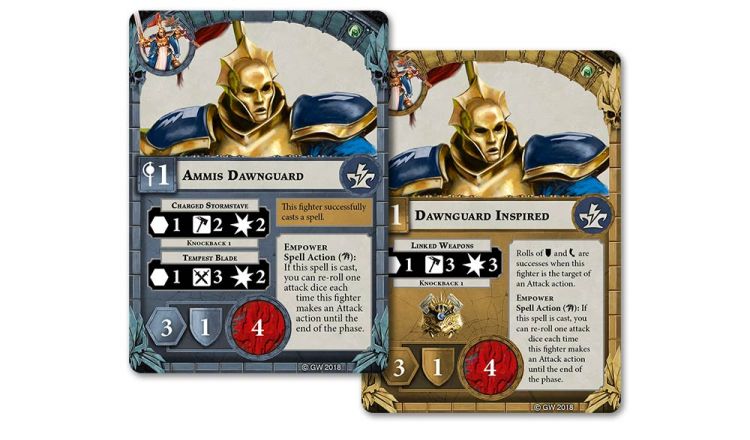 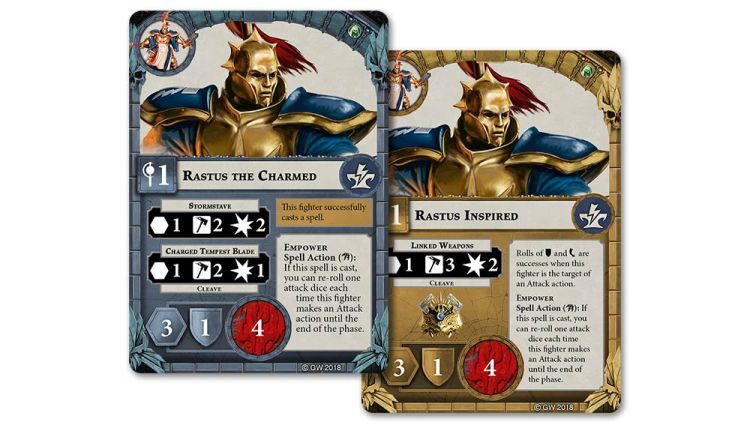 Ammis and Rastus are very similar yet also different. Both have multiple melee profiles with knockback and cleave respectively. They are both level 1 wizards making the entire warband magic users and come with their own spell Empower which is great for aggressive play as well as being easy to cast too.

When inspired Ammis goes to 3 hammers damage 3 knockback 1 and Rastus 3 hammers damage 2 cleave. Very good indeed. They also count dodges as successes when inspired but don’t count as being on guard (very important for certain objectives and cards). I like that GW tried changing them up to be different but 2 defence dice will always be better than 1 dice, even when on pseudo guard.

Still this duo are combat powerhouses. Ammis is a monster when inspired and will ruin anyone’s day. Inbuilt cleave is also great for Rastus despite the damage 2 with so many shield warbands out there.

Despite being a starter set warband, the Cursebreakers come with a high number of faction specific cards, which is great. Most of them are pretty great and a testament to (the so far) balanced approach with Nightvault. 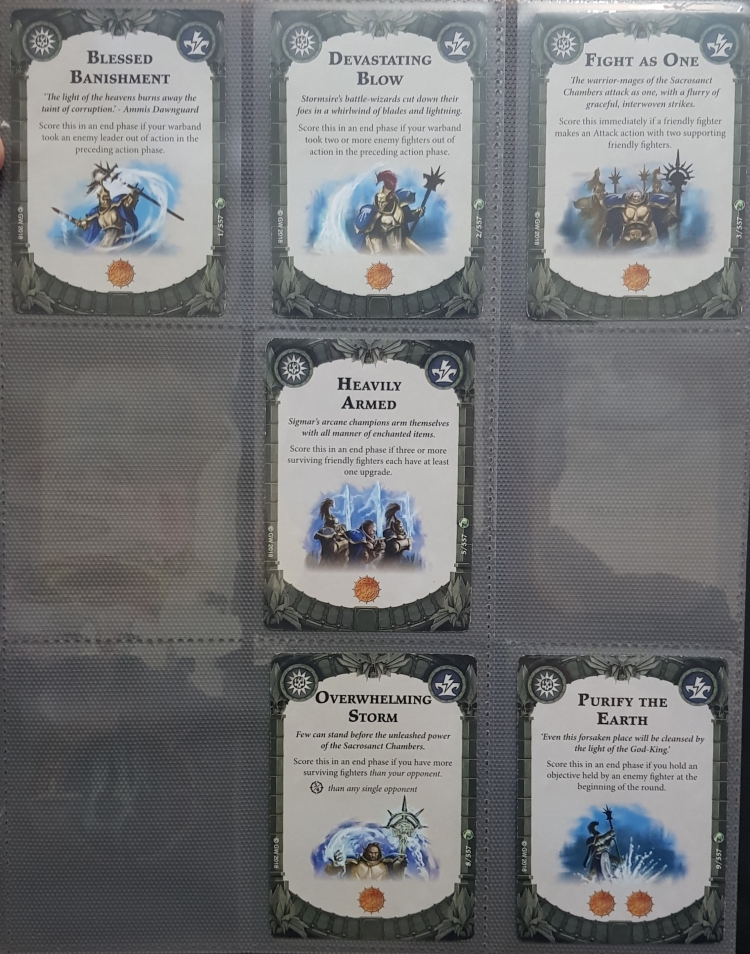 Blessed Banishment: A standard objective, a reprint of the Shadespire neutral objective Assassinate. It’s alright. Some people like it, I prefer Victorious Duel. It depends on how well you plan to deal with enemy leaders.

Devastating Blow: I’m not a fan. If this card was an instant objective, I’d run it. 1 glory at the end phase for taking out 2 fighters is a very low reward. 2 glory would have made it more tempting.

Fight as One: An interesting one. I just find it too difficult to pull off and setup. Very risky for a 1 glory reward.

Heavily Armed: A reprint of the neutral objective Geared for War. Alright if you lack access to Escalation but losing 1 fighter makes this card un-scorable.

Overwhelming Storm: Having only 3 fighters to begin with, the smallest currently for Underworlds, makes this card very hard to score. Not an efficient use of an objective slot.

Purify the Earth: Decently good. The 2 glory payout is great but becomes more difficult to score when not playing with people new to the game due to the rarity of Hold Objective play. Also you’re not able to score this if you draw it in phase 1. 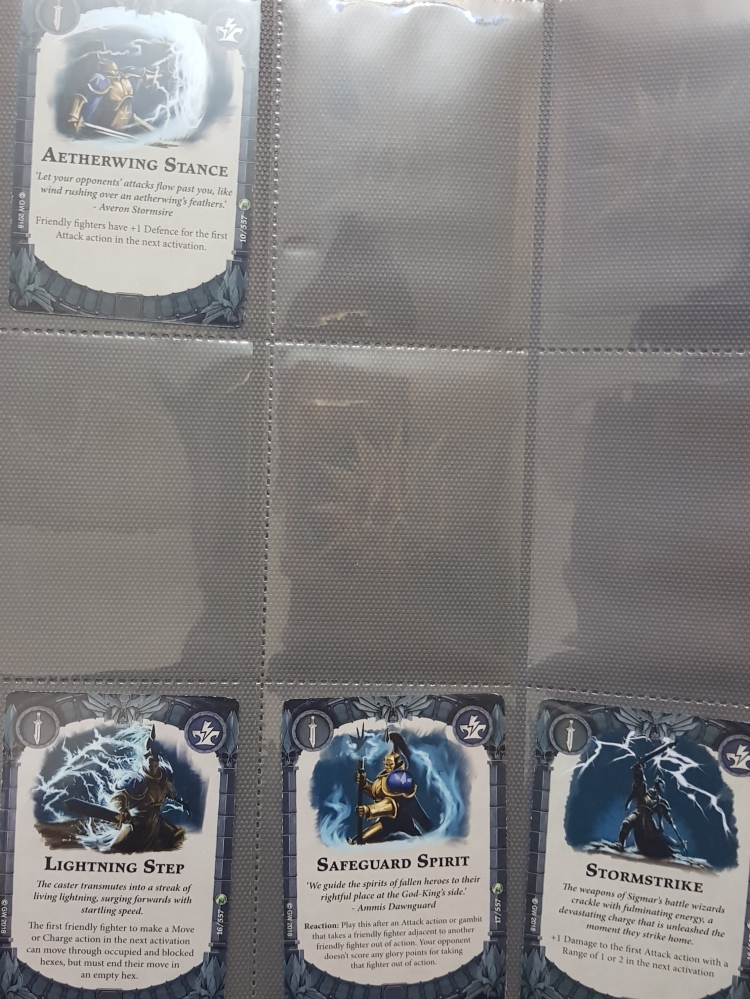 Aetherwing Stance: A reprint of the neutral gambit ploy Ephemeral Shield. I like it. Puts off anyone willing to charge your fighters. Great when casting a spell in your activation and then playing this card to give you either 3 defence dice with Averon or 2 defence dice counting shields and dodges with the other 2 fighters.

Lightning Step: Very interesting. Ignoring blocked and occupied hexes (but not lethal ones) is great. Movement 3 is not. Combine with Spectral Wings or movement upgrades to make this card truly shine.

Safeguard Spirit: Incredibly good. With only 3 fighters, you deny your opponent 1 glory from the already small pool they can squeeze out of you. Combine with Sacrificial Pawn for an additional glory to yourself. This won’t prevent your opponent from scoring objectives relating to killing your fighters however.

Stormstrike: Extra damage is good but not in a meta where Twist the Knife and Trap exist. Just run those instead. 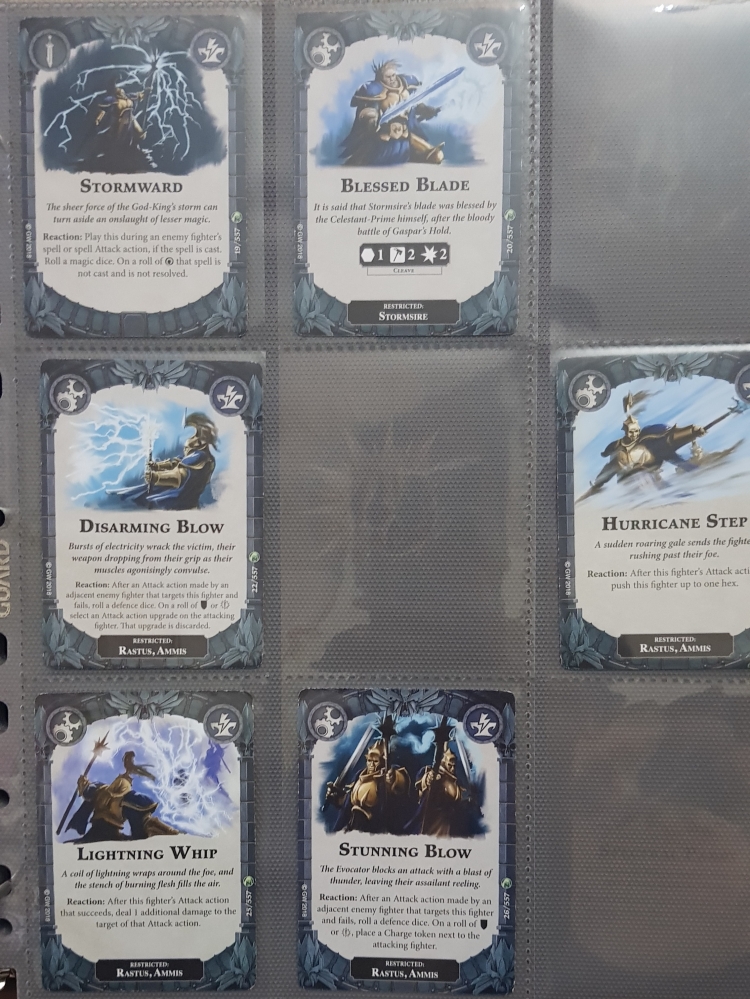 Stormward: It’s alright. A 50% chance to stop a spell. May become more useful once more spells are in the game.

Disarming Blow: Interesting but relies on too many dice. It needs your opponent to fail an attack with this equipped fighter, then for you to succeed on a 50/50 roll. At least you get to choose which upgrade is lost.

Hurricane Step: It’s alright. Push yourself away after attacking, although pushback does the same thing. I guess for 2 hex spacing or combining with going onto an objective after fighting.

Stunning Blow: TOKEN MANIPULATION!!! Sadly an enemy fighter has most likely charged you to attack so it’s a bit moot. More useful at the start of phases when fighters are adjacent to each other. 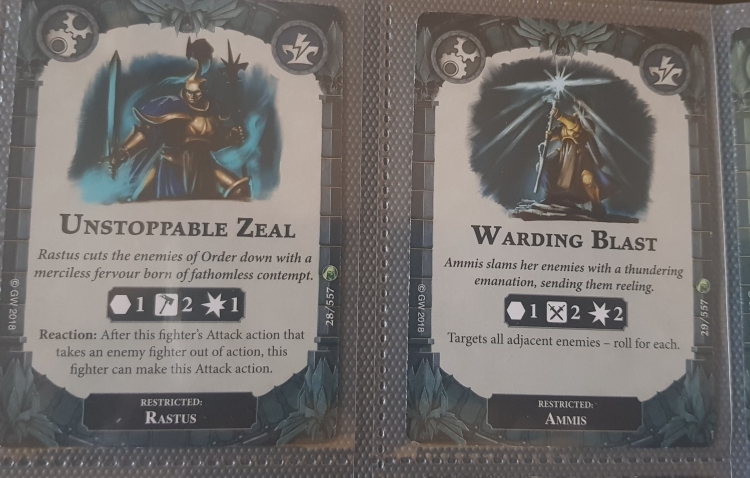 Unstoppable Zeal: I don’t think this good. Ready for Action is better. Just why 1 damage.

Warding Blast: Would take if it were 3 swords. Good for crowd control.

Cards that I think are amazing. Definitely worth including in any Cursebreaker deck.

Magical Supremacy: Easy scoring, only let down by being 1 glory. Still easy for you to achieve and very difficult for the opponent to prevent.

Measured Strike: It’s like their own Precise Use of Force. Amazing. Combine with said card to have 2 of the same. Honestly really great.

Harness the Storm: Score immediately when you cast a spell. With 3 warriors. Who are all wizards. Just take it already.

Chain Lightning: Random but decent for a damage spell, especially as people like to bunch up as well. Easy to cast with Averon.

Empathic Conduction: While Healing Potion is better, I included it as an easy to cast spell without using an activation. Can cast even when fighters are at full health or use on Averon after rolling 2 crits for magic.

Cry of Thunder: Where you sitting at the back of the board bunched up? Oh dear. Fairly difficult to cast but it does so much damage. The unlimited range is icing on the cake. 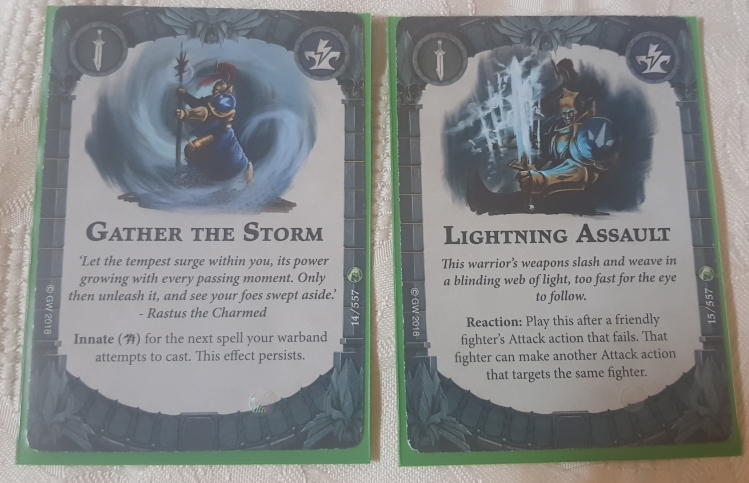 Gather the Storm: Our first innate. Use it before casting Cry of Thunder or to guarantee an Empower goes off.

Corposant Staff: A simple spell with lots of uses. Make Averon’s Fulmination range 4 or his melee profile range 3. Even use it on the other fighters to make them range 2.

Tempest’s Might: Amazing. Make Fulmination damage 3. Use only on Averon. Will be even more potent once more magic attacks come out.

Eye of the Storm: 2 innates make the Cursebreakers super reliable casters. Use it mainly for Averon as he can throw more dice at spells.

Nightvault has a lot of reprinted neutral cards so I won’t be covering them. However, here are some other ones that are unique.

Lucky Trinket: Not great at all. Mainly for warbands with no magical access.

Determined Effort: A good neutral. Extra dice can sometimes make all the difference.

Vital Surge: I’m not a fan. The game is currently in a state of 1-hit kills and this does nothing to help with that.

Grinding Earth: Good but abusable due to Great Concussion. If it had more range I would have loved it.

Escape Artist: Once again requires your opponent failing but the choosing push is not great either. Lightning Reflexes is better for you Shadespire players out there.

It’s the bit you’ve all been waiting for! I’ve used the Cursebreakers for a while now. I feel they excel at aggressive play but not rushdown like Steelheart’s Champions. Instead you spend phase 1 casting magic and moving up, then the later phases are spent dealing with the foe via magic and combat.

Before going into the deck building section, please read my article on the subject: here. It’s how I approach deck building and will give you a solid basis to start from.

Firstly I’ll go over a deck for players new to the game who don’t have access to Shadespire cards.

This deck has pretty much the best aggressive build you can make from the Nightvault box alone. I put in Hold Objective 1 and 5 for variety as well as the less optimal cards to fill things out but also to give you options when playing.

Precise Use of Force

For those with access to all the Shadespire cards, this gives you all the tools for a solid aggressive force. Run forwards and blast people away with magic. You have access to more defensive ploys as well as those used in almost every deck. Feel free to make changes as necessary but it should give you a solid basis to start from.

Overall these guys are solid. Once they get their magic setup, the Cursebreakeds can be an overwhelming force. You have to play carefully though and can’t throw them straight into the fight like with Steelheart’s Champions. Bide your time then unleash magical fury from the chosen of Sigmar.

Tune in next time where we get very spooky with ghostly rolled crits.