Today saw the first release of the new Nightvault expansions. To begin with I’ll be looking over the Echoes of Glory card pack. I bought these this time so no free stuff compared to the Nightvault starter set release.

Echoes of Glory contains all the new NIGHTVAULT ONLY cards that you would get for buying the Nightvault boxes of Steelheart’s Champions and Garek’s Reavers. If you’re new to Warhammer Underworlds and did not buy the Shadespire starter set then there is NO NEED for you to buy this. As I’m a seasoned veteran, however, I just needed the card pack instead of buying the warbands and cards that I already own.

The box contains 62 cards in total. 22 universal objectives, 20 universal gambit cards and 20 universal upgrades. I’ll be covering each in detail with my top picks from each section.

Normally I don’t talk about this but I feel the need to now. Echoes of Glory comes in a card box, which can also be doubled as a deck box. The problem is that the cards are so tightly packed that the edges begin to fray the more you take them in and out of the box.

As you can see with the top Objective Card, it has already began to peel at the bottom where it hits the tag of the card lids. I’d suggest you store the cards in another deck box or card folder once you take them out of their packaging. I would not recommend putting them back in the box at the risk of damaging your own cards.

It’s a fairly considerable downside but I suppose it is to keep costs down. I would have preferred a sealed card box that is useless once opened over this but for now you’ll just have to be extra careful.

I’ll be starting from the bad to the good this time. The bad cards aren’t terrible, some of them are just reprints of alright Shadespire cards but there are cards I feel which are bad when looking at the game competitively.

Girded for Battle: Geared for War reprinted. Alright If you have a 3 fighter warband and don’t have access to Escalation. Or just get Escalation.

No Heroes: A 2 glory neutral version of the Sepulchral Guard objective Peerless General. It’s alright if you play for that objective already but at 2 glory it’s difficult to include as a 3rd end phase objective.

Trash to Treasure: This card is bad. If you’re going first in the end phase, you need to hold on to this and gamble that your opponent won’t score anything. Only 1 glory too. Way too little reward.

Brute Force: A reprint of Heroic Feat and gives only 1 glory instead of 2. Heroic Feat wasn’t even good to begin with so you’ll most likely want to pass.

Ganging Up: It’s too situational to pull off. Score immediately with 2 glory is awesome but the condition is not. Only really exploitable with Thorns of the Briar Queen.

No Openings: Great if instants weren’t so common and if we didn’t have cards like Change of Tactics or Treacherous Foe.

Swift Beheading: It’s a decent card but sacrifices so much of your gameplan and positioning to score. Victorious Duel is still better.

Total Dominance: Like Annihilation but for 1 glory more and a far more difficult requirement to meet. A win more card that is quite hard to pull off.

All or Nothing: Take this if you feel you will never score an objective all game and hope you can max out on glory from kills. For some reason.

Arcane Implosion: Hope the enemy wizards blow up. When most are 4 wounds. And only get 1 glory. Errrrrm…

Martyred: Great for Sepulchral Guard. I think? I just don’t like cards where you expect your own fighters to die.

Grand Melee: An interesting choice for people who run “burn decks” where they focus on scoring glory by using Shardgale to damage all fighters.

Singled Out: Chosen Champion reprinted. A lot of people like that card already whereas I don’t. Also more bows.

Dashed Hopes: Can be good seeing how easy it is to inspire a lot of fighters nowadays. Shame it’s not an instant.

Combination Strike: Decent if you stack up on lots of score immediately cards. Strictly a win more card however.

Neck and Neck: Potentially good if you can control the flow of glory early in the game but still quite hard to score.

Opening Gambit: A more reliable version of Combination Strike. Same points apply but this is the safer option.

Quick on your Feet: Decent passive for 3 to 4 fighter warbands as well as Sepulchral Guard for stacking with March of the Dead.

Cornered: Like Trapped but 2 glory. Great if you are great at positioning and exploiting your opponent’s movement.

Witch-Slayer: Pretty good once wizards get more popular and very scorable due to the Cursebreakers being 3 wizards.

Strong Start: He who dares, wins. For those aggro players after my own heart that always do first activation charges.

Gambit Spells – It is what it is

There are only 3 gambit spells in Echoes of Glory, which makes sense as Reavers and Champions have no wizards. 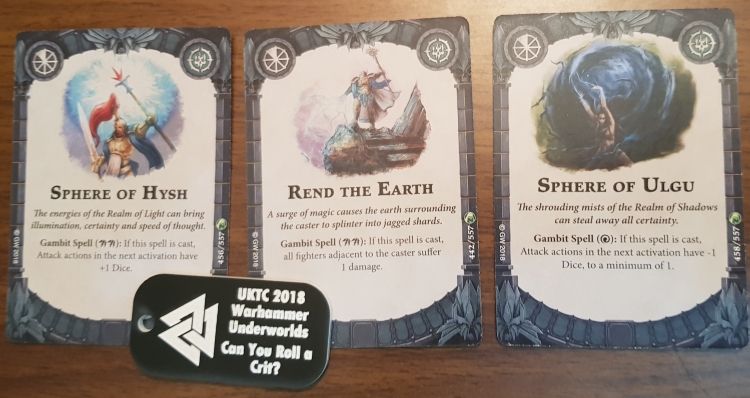 Sphere of Hysh: Would have loved it at 1 channel but 2 makes it very difficult, especially when you have Determined Effort in the game.

Rend the Earth: Wizards are quite fragile in combat. Being 2 channel makes this card even less optimal.

Sphere of Ulgu: This, I like. 1 focus is just what’s needed and the negative effect is very nice.

Instinctive Denial: A 50/50 that requires you to be adjacent to a wizard to stop a spell. Very un-optimal.

Spiked Surface: A super specific version of Trap. It’s balanced for instant damage but not when Trap and Twist the Knife are in the game.

Baffling Illusion: I’m not a fan of the scatter mechanic, especially when it comes to being used for movement. It should have been scatter your movement +2 dice. It’s really not worth running.

Unchecked Energy: It’s not bad as a 50/50 but relies on opponents being next to or in lethal hexes which is usually quite uncommon. At least if effects fighters standing in lethal hexes. Note that this will affect your fighters too.

Aggressive Defence: This is good in theory but as the game is in a state of 1-hit kills, this is pretty much unusable.

Damning Pact: Suffer 1 damage to do 1 more damage. If you successfully cast your spell. Could combo well with spells or blow yourself up. Would have liked an additional magic dice to make casting more reliable.

Dancing with Death: I just don’t like cards that rely on your opponent failing attacks. The push is nice but unreliable.

Sudden Paranoia: It’s only here because I feel supports for don’t make a huge difference generally. Better used for when your opponent is going to attack but this feels more like an anti swarm faction card.

Haymaker: +2 dice makes it great for wizards. Play it near the end of a phase for maximum use but that no defence dice is a big drawback, especially when you’re in a position that your star fighter has to hit early before dieing.

Lethal Ward: Not bad. Can combo with pushing enemy fighters back onto objectives for guaranteed damage.

Quick Exchange: Interesting when you need to play pass the parcel with upgrades.

Vertigo: If scatter becomes super popular, great. Still this will shut down all enemy scatter actions.

Centre of Attention: Almost a reverse Great Concussion. Punish people trying to score Alone in the Darkness or pull fighters out of position. Awesome.

Ghoulish Pact: Inspire a Skaven or a Orruk while also giving them an upgrade for free? Yes please! Combine with My Turn for a very strange Ready for Action combo.

Revoke: Persisting ploys are already strong and this will shut one down for free. Definitely a card I feel will get stronger as time goes on.

Regal Vision: A 3rd inspire card for the Fiends and a needed 2nd for the Chosen Axes. Move, inspire, simples.

Enchanted Greaves: Or you could just ignore lethal hexes with push cards. Only good if your opponent wants to sit around them when Great Concussion exists.

Butcher’s Eye: Crit on cleave is alright as a free fighter effect. As an upgrade? No thanks.

Tome of Warfare: I suppose it’s alright but not when you sacrifice and action to do so.

Horrifying Armour: -1 dice to opponents’ attacks is not worth it when it makes you easier to kill. Combine with Cursed Shield for maximum self-punishment. 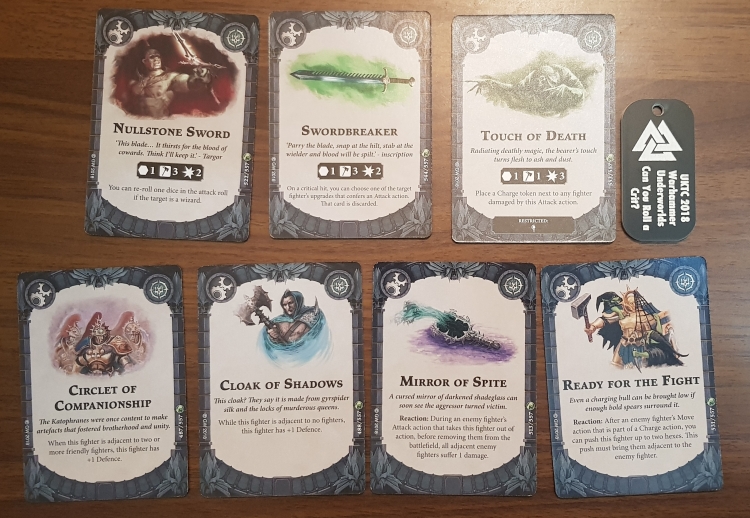 Nullstone Sword: I think this a well-balanced card. A decent trade-off to Shadeglass Sword as it doesn’t pop after doing damage.

Swordbreaker: Possible the best card description in the game. A 42% chance to destroy an attack action upgrade and it doesn’t disappear after doing damage too.

Touch of Death: Potentially infuriating for your opponent if you can stack enough attack dice mods. 3 damage is very nice too although you’re likely to kill at that value anyway.

Circlet of Companionship: Potentially great for people who turtle up as well as +7 fighter warbands.

Cloak of Shadows: The anti-Farstrider card. Remember this stop workings when you’re adjacent to ANY fighter.

Mirror of Spite: Make people attacking your Horrors feel flaming regret. If you like suicide burn charges, this is for your card.

Ready for the Fighter: Potentially abusable and alright as an upgrade. Can potentially make opponents decide to not charge.

Glory Seeker: Basically a +1 damage card due to how commonplace 4 wound fighters are. Another buff for Farstriders and ranged attacks in general.

Potion of Constitution: Great to counter cards like Twist the Knife or actions that kill you or leave a fighter on 1 wound. Really awesome.

Slumbering Key: A reprint of A Destiny To Meet making this card great.

Potion of Grace: A better version of Seize the Day. Combo with Quick Thinker or Hidden Paths.

Tome of Glories: Sit on an objective to gain a glory. Stack with Time Trap and Second Wind if you really want to get the most out of it.

In conclusion I’d recommend buying. The low £10 price point for 62 cards is great and a lot of them are pretty great. A bit weak on the objective card front and gambit spells but made up with the ploys and upgrade selection. A must for competitive players to the casual gamers.

Tune in next time where I’ll be reviewing the Eyes of Nine. There will be cards, tactics, decklists and, most importantly, crits 😉

18 thoughts on “Echoes of Glory”