Unleash the beast in October!

Beastgrave approaches and new challenges await. Today Games Workshop have updated the details to the world’s first Warhammer Underworlds Beastgrave Grand Clash. I’ll go over the changes as well as telling you why should go.

As many of you know Grand Clashes have transitioned over to 2 day format. After the July Warhammer World Grand Clash a few changes have been made to the system. These will help improve the experience for casual and competitive players alike to bring the World’s best Underworlds event. Here’s what the schedule looks like now:

The first change is that day 1 is now only 4 games instead of 5. Not a huge change but it does make getting into that top 16 cut a little more difficult. I’m a little disappointed at the loss of game 5 on day 1 but I’ll live with the change. It does mean that you can’t really lose a round if you want to make the cut.

There have been a few minor tweaks here as well:

Results and tiebreakers remain the same. 3 for a win, 1 for a draw, 0 for a loss with losses then glory differential used as tie breakers. The roll-offs only occur for final placements at the end of the tournament and not after a round result.

After the first round players are grouped into brackets with people that have the same results as they do. There is, however, one big change…

Oh yes. I like this. No wait, I LOVE it. You may not get the importance of this but my big critique of tournaments is that you can predict your matchups if you pair lowest to highest within a bracket. Not only that but it also enforces the tactic of winning big round 1 to stay on the top and only facing against the lowest of the bracket every round to comfortably get into the final. Random pairings within a bracket pretty much stop all those things and make every round even more of a challenge.

Day 2 top 16 cut has been refined as well. Now players will avoid people they’ve played against previously (unless there’s no way not to like in the final). Minor tweaks that just improve the experience overall.

Not made day 2 top 16? No problem! Warhammer World will be doing another tournament alongside the top 16 for those who didn’t qualify! 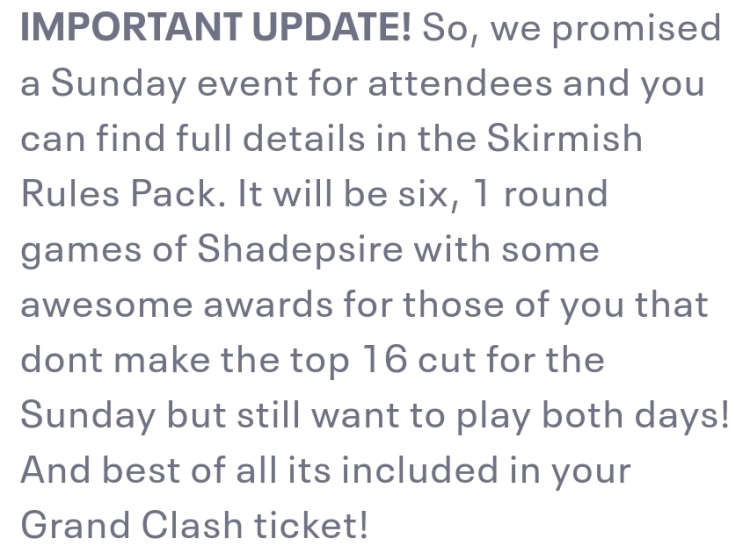 Great news. The July Grand Clash couldn’t hold a Skirmish event due to various issues but it’s awesome to see it implemented for the October clash. Win or lose, you’ll always have something to play.

So yeah, come down to Warhammer World on October the 26th to the 27th. It’ll be the World’s best Grand Clash. Warhammer World is always awesome to play and visit. The Events team always put so much effort into their tournaments so you’ll never have a bad time. All this and for still only £25!

For the full details check out the event here.

As always I’ll be there so it’d be great to see as many people as possible. The Beastgrave hungers and my crits are ready 😉