The power of painted Snarlfangs.

Greetings and welcome. After a long hiatus due to work and exams I’m back! Today I’m doing a Warband Showcase of my Rippa’s Snarlfangs.

In a change to the format, instead of going over how I painted each part of the model step-by-step, (partly due to me forgetting to take pictures continuously during the painting process) I’ll be going over how I went about researching and picking my desired colour scheme then go into how I approached painting the warband. This is more abstract but it will help you when it comes to creating your own unique colour schemes.

First I started off by looking at the ‘Eavy Metal paintjob. It’s really nice but not what I was looking for. Beastgrave is in Ghur and I just couldn’t picture the Snarlfangs being grey. I also paint all my Warhammer Underworlds warbands with unified desert yellow sand bases and green (covered by the Grots) so grey wouldn’t do. I now wanted each Snarlfang to be a different colour but all had to be dark schemes (colour theory, my bases are light). With that idea in-mind I began my research.

It may seem confusing but researching is an important step for painting. As Snarlfangs are basically giant wolves I googled images of natural wolf pelt colour schemes for inspiration. When you have a real-world link to a miniature you’re painting, you’ll be surprised what useful colour schemes the world has to offer. I’ve done the same in the past for my Tyranids in Warhammer 40,000 by using insect colour schemes.

With my research done I settled on a brown scheme for Rippa’s Snarlfang, white for Dead-Eye and grey for Stabbit. I went for varied Snarflang schemes as I wanted the wolves to stand out more and wolf packs usually aren’t all the same colour. Rippa was brown as I thought it fitted him and suited the leader of the pack. It was also partially based off of my dog.

I cannot stress this enough, always do a test model first before committing to a new colour scheme. A test model can be a miniature from the warband or just a miniature at random with an appropriate painting surface. I had multiple wolf miniatures to choose from but I was in a rush and skipped this foolishly.

Recently I’ve been painting everything with Citadel contrast paints to great effect. I started with the Snarflangs doing each in their corresponding contrast colour. Then when I went to highlight them via dry brushing, the process peeled off the contrast on the fur texture.

As the schemes were kinda ruined at this point I went to my backup plan. They now would all be painted brown! During the research process I looked up painting videos for Warhammer wolves and found this:

Using the video and a picture of my dog, I went at it all again. Despite the contrast messing up, it did work as an excellent preshade for the brown scheme. 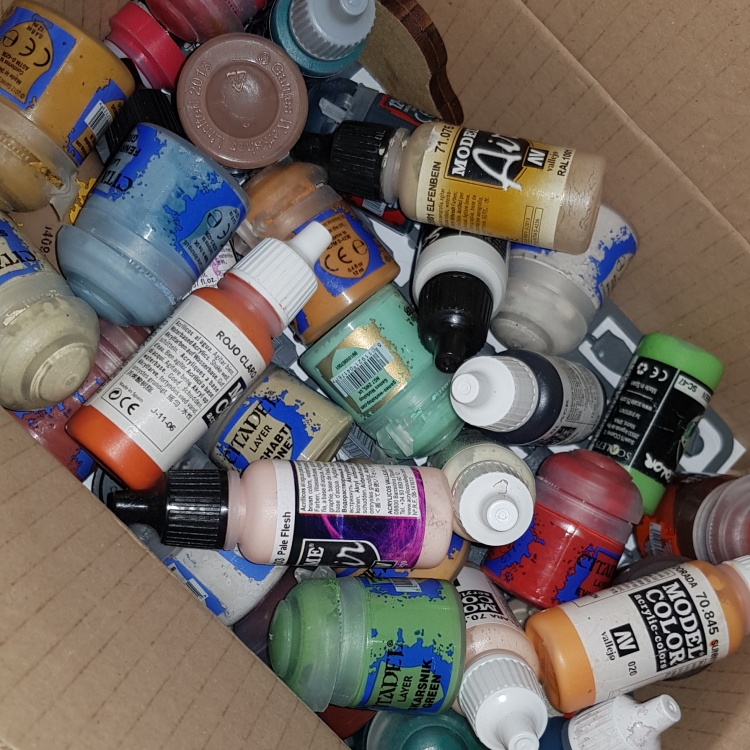 The Snarlfangs were all fully airbrushed various shades of brown. I actually went over every step at least twice to blend to overspray and layers together. I also airbrushed a fine layer of black on the top of the Snarlfangs to darken out the colour scheme some more.

An interesting thing I’ve found with airbrushing and contrast paints is I’m usually working from light to dark. I did the lightest parts of the Snarlfangs (face and paws) in a mix of Balor Brown/VMC Ivory/VMC Off White. Once dry I washed the entire model in a 50/50 mix of Lahmium Medium and Agrax Earthshade. I only then edge-highlighted the lips and pae tips with VMC Off White. The wash helped blend and darken down the scheme while applying more natural shading.

Everything else was pretty much painted on the fly with whatever appropriate colours I had at my disposal. In all I used about 50 or so paints for the warband (probably more). Contrast helped me paint the pinkish tassels, animals on the bases as well as the red on the shields (paint whole shield gold, was Agrax Earthshade then paint Flesh Tearers Red into the shield design).

For the faces I painted the Grots with traditional red Greenskinz eyes (and red glazed noses). For the Snarlfangs I was going to do the same until checking my reference pictures again. Due to this I decided to paint them like “normal” eyes, aka white with black dots. I was confident about it at first but it really turned out well in the end.

For the metal/steel I wanted it to be rusted/worn as Grotz aren’t the best at keeping their weapons clean. For this I use watered-down Vallejo Smokey Ink (top hack). It dries quite matte and gives a great worn finish. After highlighting I did a light wash of Agrax to darken them down a but more and then doing another final edge highlight.

Leather colour was a difficult choice as I had already gone with a predominantly warm brown colour. After much thought, instead of going with a red or other extravagant leather colour I went with black and dark brown for the Snarlfangs. Grotz got light brown as the top of the Snarlfangs are dark brown which helps provide a nice contrast.

Bases are painted as I normally do which is Zandri Dust, wash Casandora Yellow, rocks washed with thinned Agrax, then all highlighted with an Ushabti Bone drybrush.

As always I varnished my models after painting was done. This does 2 things: protects the miniatures from damage during gaming (paint chipping mainly) and unifies the finish of the miniatures so that it’s all the same (some paints dry matte while others dry satin). I do a coat of Vallejo polyurethane gloss varnish via the airbrush then once is done I do a coat of Vallejo polyurethane matte varnish to matte it all down.

After all the painting talk here are the finished products: 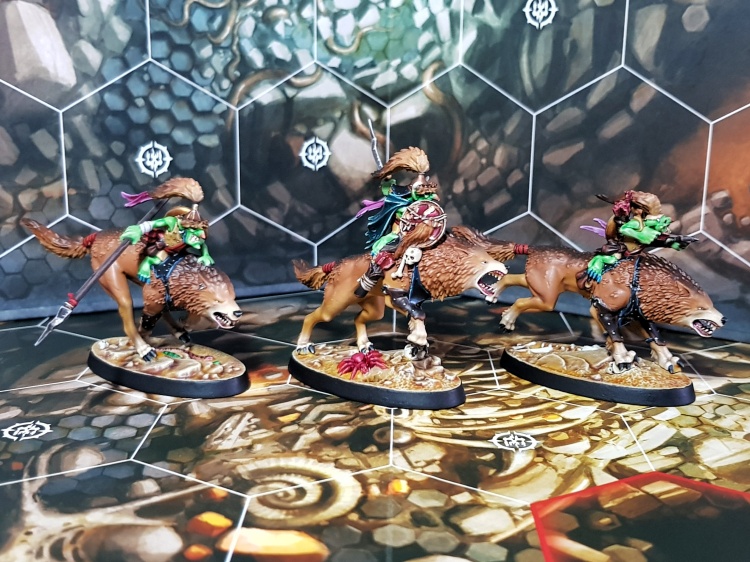 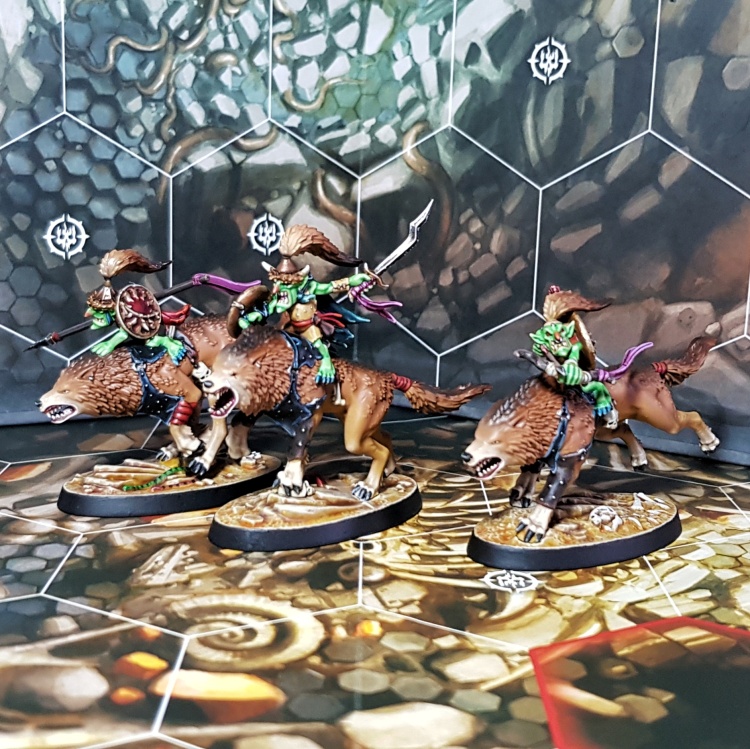 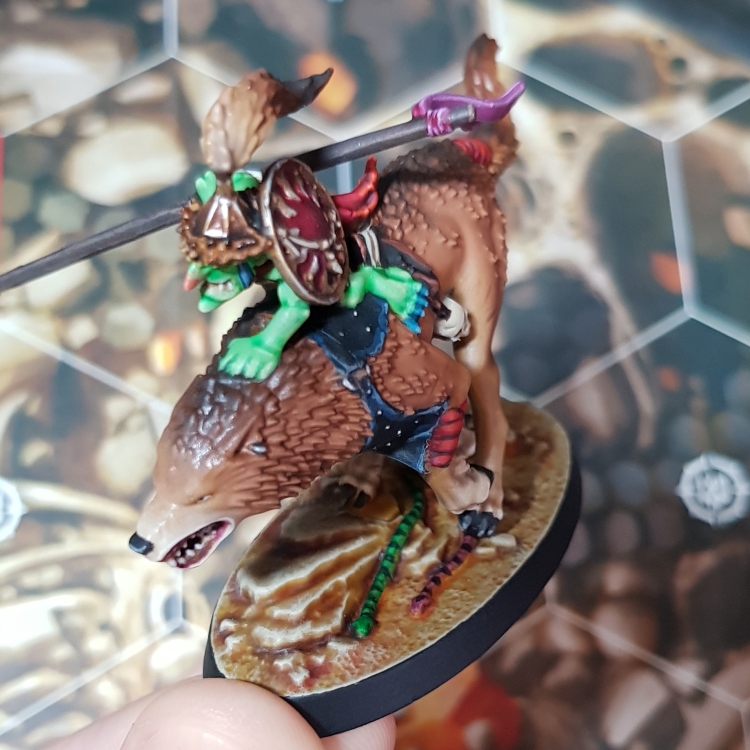 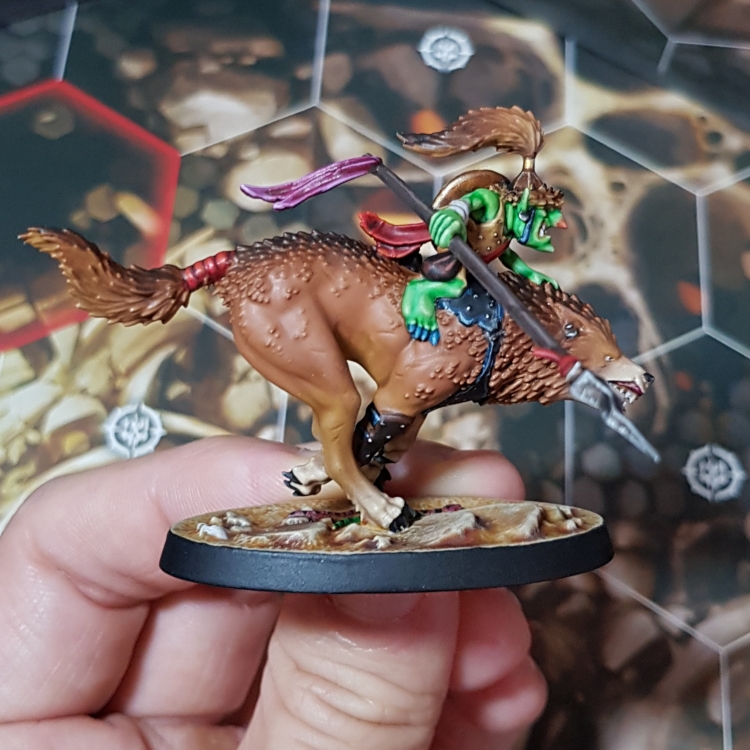 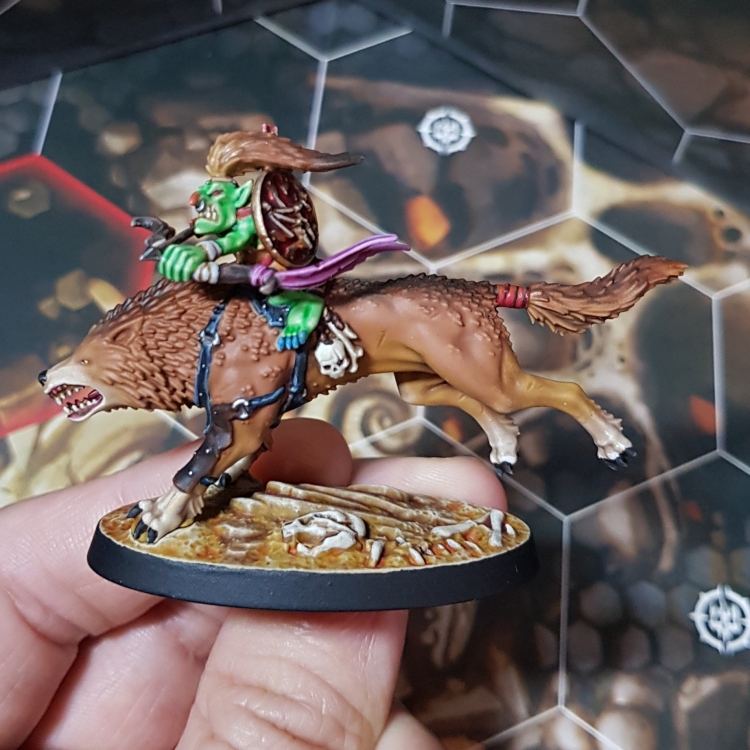 I’m really happy with how they turned out, especially with how bad they looked at first. Here’s some WIP pictures to show how the painting evolved:

It goes to show that you should never lose heart while painting. Miniatures often don’t look great until they’re finished, so keep pushing forward until they’re done. My favourite part has to be the Snarlfangs, they just have so much character to them.