It’s the return of David “Stat Man/Chancellor of Reading” Smee!

Hello, it’s David and after a long break I’m back to look at more stats analysis! So why the return? Well you can blame Mr Carlin (from Steel City Underworlds) for this comment on Facebook:

And well as a maths teacher how could I refuse that challenge, so I pestered John to let me publish another article and here we are.

Last year when I broke down the stats for the grand clash I spent hours putting them all together and collating them. I have a son now, so instead I have stolen these excellent data tables from Jon over at Well of Power who have done all the leg work for me to be able to ramble about. (You have mine and my sons thanks, we will use the time you have saved me we will be watching Hay Duggee together instead. Feel free to join us:

A Look at Attendance 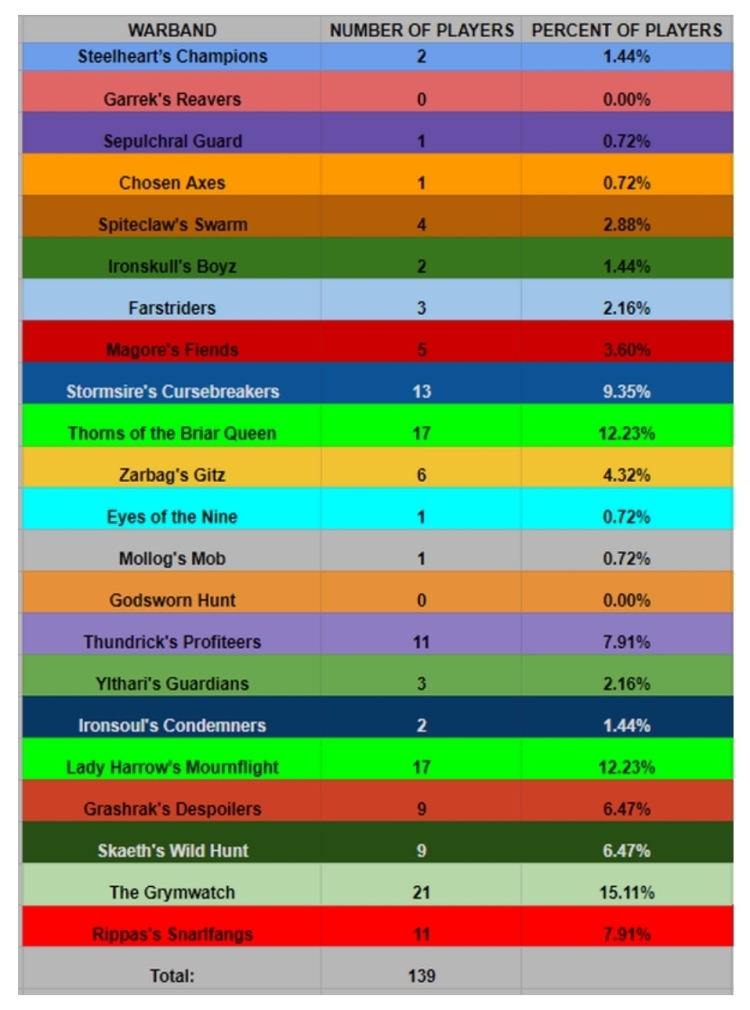 Always a good snapshot of what is thought to be good in the meta at present. We will see how correct this is. Only 3 Shadspire warbands are taken in decent numbers: Magore’s Fiends, the Farstriders and Spiteclaw’s Swarm (all three people still have success with them). From Nightvault Stormsire’s Cursebreakers, Thorns of the Briar Queen and Thundrick’s Profiteers are very popular with Zarbag’s Gitz seeing a bit of a come back. Beastgrave dominates the field with the Grymwatch being massively popular (due to there perceived power?). They have a very strong showing (due to being the newest?) and both Grashrak’s Despoilers and Skaeth’s Wild Hunt are seen in okat numbers. Very noticeable at how many Lady Harrow’s Mornflight there are especially when compared to their poorly represented Ironsoul’s Condemnors sibling. (Why the two people who brought Steelheart’s didn’t upgrade to the Ironsouls is beyond me.) [Because they do not believe in the CRITS.] 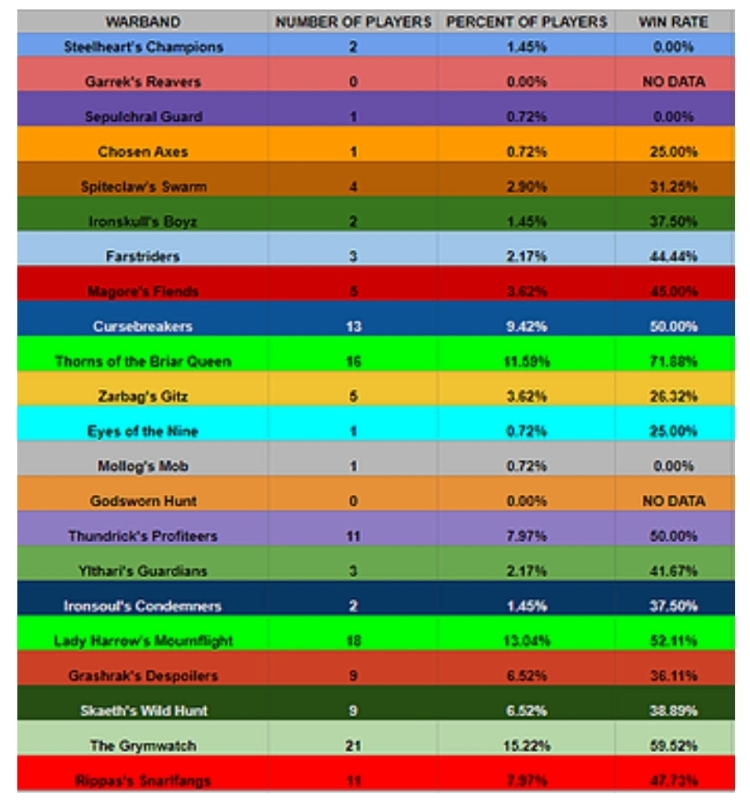 Hard to ignore the headline figure here, Thorns of the Briar Queen have a massive [mathematical term] win rate. It’s a truly staggering figure and shows just how strong they are. Even the Grymwatch, widely believed to be top, have a more sensible win rate. Lady Harrow’s Mornflight are just behind the Grymwatch, then there is a larger group who do ok which includes Rippa’s Snarlfangs, Thundrik’s Profiteers, Stormsire’s Cursebreakers and Magore’s Fiends.
(Worth noting that due to staggeringly high Thorns of the Briar Queen win rate all the others will be a good few percentages lower. Stormsire’s Cursebreakers, for example, would go up to 55% if we ignore the Thorns matchup.)

Places 9/10 you can lump in with top 8 quite easily, as they conveniently drew with each other in the final round to both make it into the top 16. Rest of the group is made of 3 Stormsire’s Cursebreakers, confirming they are still massively competitive when in the right hands. Grymwatch, who despite having most players and a good win rate still only get 2 players into top 16. This highlights a consistency problem, which is further backed up by number of Grymwatch who won 3 matches but dropped games doing it. (This, I suspect, is down to needing good card draw to get pushes to get on to objectives and winning boards.)

Warband Focuses
Just going to home in on a few warbands that are strong or highlight interesting points:

These numbers are insane! Clearly the strongest warband by a mile, only Rippa’s Snarlfangs cause them concern. Even against other good warbands they come out better-off. Doesn’t surprise me, as they have great faction cards, a trio of good fighters and an amazing push ability built in to claim objectives.

Each percentage point gets harder to earn the more you move up, due to the way tournaments are structured. As you succeed you generally player better opponents so each win (and percentage win rate) is harder to gain. This means the ‘real world’ power gap between say Cursebreakers at about 50% win and Grymwatch at 60% is not as big at the gap between Grymwatch at 60% and Thorns at 70%. This is why I’m so surprised by quite how big this value is.

Not the threat they once were (which is great, cos if you want to play a gun line go play 40k), they have struggled against many of the new/quick warbands but are a great counter to Lady Harrow’s Mournflight (along with Farstriders). 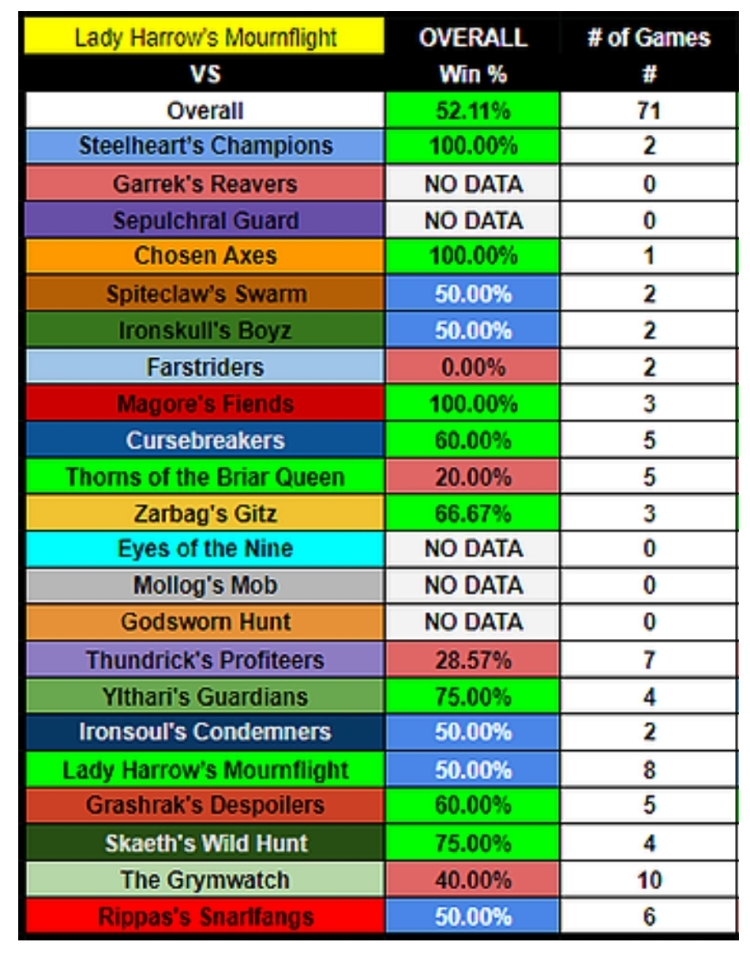 Very strong warband, but few bad matchups such as the ranged warbands which keeps them in-check. Personally shocked by the Grymwatch stat as in games over the last few months vs Jack I’ve only defeated him twice with my Grymwatch.

Great results when fighting most warbands but cannot compete with the Thorns. They clearly struggle in the match up, as the Thorns can do everything they can but with lethal immunity and an in-built push.

The dogs have some good matches and some bad. Have one of the biggest spread of results including the only warband to have a good success rate vs the Thorns. This highlights the very rock/paper/scissors feel the game has at present, I will leave it to you to desire if that’s a good or bad thing.

In conclusion have about 6 warbands who compete in the meta, which is about what it has been for a while. Cursebreakers and Thorns are consistently strong and have been since release. There has been a change in who is challenging them with three of the new guys stepping up.

I am enjoying that large warbands and objectives are having their time in the sun, I would be concerned if we got a reactionary ban list designed to hit them as this would equally hit many less successful warbands (like nightgoblins) who need similar common cards.

I do feel the dominance of both types of ghosts shows the importance of lethal at present and the strength of ignoring them. This would be mechanic I would like to see adjusted. Moving forward, I am unsure if we can wait till next season for this.

If we are ever to widen the field of competitive warbands I feel we would like some serious consideration given to restricting some faction cards as a way of depowering the dominant warbands without rewrites or without affecting how they play.

So there we have it, data studied, conclusions drawn. I took the challenge and I hoped I delivered, I will leave it to others to decide because I have a date with my son and a camp dog…

There we have it, another stat-ladened article from the Stat Man himself. It’s interesting to see all the results clearly. The conclusions raised are backed by numbers and result history so it’ll be interesting to see where things go from here. One thing is for sure, we need stats on crits rolled!