Who are the best in the game?

You’ve seen people say what are the best cards or warbands in Warhammer Underworlds but today I’ll be going over my choices for best fighters in the game. Card rankings and warband tiers will always be very subjective but fighter placings is something everyone can generally agree on, although you may be surprised by some of the fighters chosen.

For these choices I’ll be taking into account: the fighter stats, difference between inspired and uninspired, inspire mechanic, how they support their warband and card support.

Without further ado, I’ll begin with my honourable mentions! Strong fighters who almost made the cut or were beaten by superior warriors.

Angard Brightshield: Originally 5th for me, her placement dropped due to the strength of others. Despite this she is still one of the strongest in the game and a lynchpin for Steelheart’s Champions. The first 3 smash attack with 2 damage and her inspired attack Furious Parry make her a formidable fighter, especially with 2 block. Ignore her at your peril.

Ammis Dawnguard: Another Stormcast! From Nightvault this time, Ammis is a level 1 wizard who has access to a 2 smash 2 damage attack. Inspiring on casting a spell successfully turns her into a top-tier fighter with 3 smash 3 damage and counting dodges as successes for defence with blocks. Knockback 1 on both attacks makes her even better at shunting targets. The reason she isn’t in the top 5 is because she needs to be inspired to be effective which can be a problem without casting a spell successfully or investing in cards to ensure inspiring.

Sanson Farstrider: There’s a theme developing here. His 4 movement and somewhat dependable inspire mechanic are nice. The only reason he’s mentioned is because of that damn bird. What’s better than a 4 hex 3 fury attack? If it did an additional point of damage on a crit! 4 range with movement 4 is huge with a free Shadeglass Darts on steroids. His disproportionate inspired and non-inspired stats are the only reason he isn’t in the top 5.

He’s mean, he’s green, he’s also very consistent. Gurzag has always been a big threat and carries his warband. 5 wounds base with a 2 smash 3 damage attack make him into a beast who which other fighters need to invest multiple cards to become similar.

A rather easy inspire mechanic of simply taking damage (that is made far easier with the introduction of lethal hexes) brings him a simple addition: an innate Awakened Weapon. This makes him to even more of a consistent fighter, especially with the fact that Awakened Weapon is restricted.

His only downside is movement 3 which requires mobility cards for optimal use. Still, Gurzag needs minimal investment to get going making him not only the most consistent fighters in the game but also one of the best. 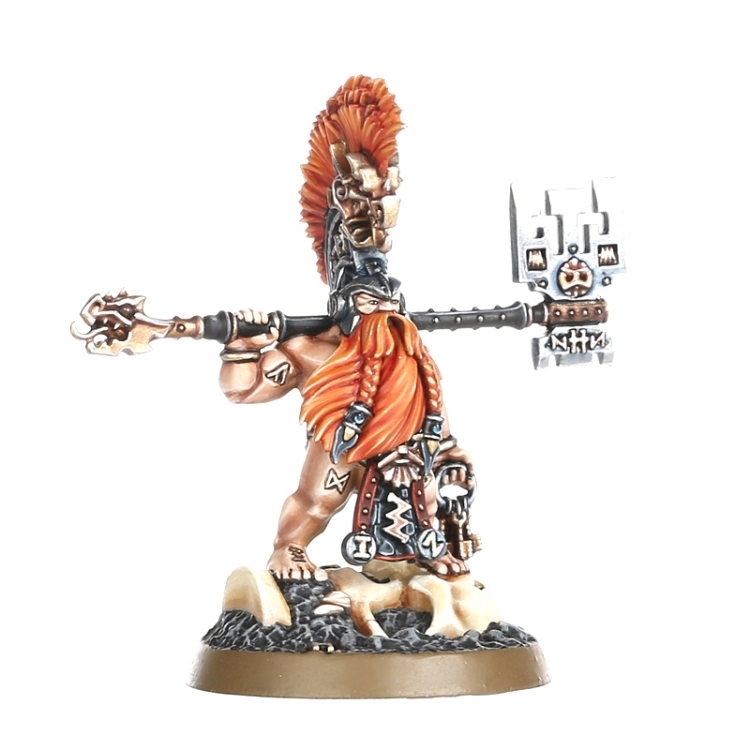 He’s short and ginger, 2 of the deadliest combinations in the world. He also has a massive key axe that’s longer than his body. Base stats give him 2 smash with 3 damage and 4 wounds, already making him a fearsome opponent in close combat.

Grimnir Inspired takes things to the next level. A rather difficult inspire mechanic transforms him into a monster with: 5 wounds, 2 smash 4 damage with cleave! He even gains a pip of movement. When this guy inspires, the whole dynamic of the game changes as he cannot be ignored.

The downside is the movement. That move of 2 is terrible but becomes workable when inspired to 3. Now it could be argued that the disparity of his stats between inspired and un-inspired shouldn’t include him but Grimnir already has great base stats that become utterly bonkers when inspired. His effect on the game cannot be denied and cements his spot in this list.

This little guy is what dreams are made of. He’s not a leader but he’s the best fighter in Zarbag’s Gits, although his fighter stats may not show that at first. Normally he is movement 2, 3 wounds, 1 dodge with a 1 fury 3 damage attack. Not bad but not great. However, when inspired he becomes something else entirely…

With the easiest inspire mechanic in the game, Snirk inspires after any activation which includes yourself or your opponent’s. When inspired he is unable to move, attack or go on guard. Now this may sound terrible but in return he gets: 3 dodge and a unique fighter action. This allows him to roll 4 dice and scatter 3 causing a single damage to any fighter in his path. When positioned correctly he can kill any adjacent fighter with 3 wounds or less.

His unique scatter mechanic makes it very reliable and it also bypasses cards such as Soul Trap and Last Chance which can be a terrifying prospect. Yet his greatest strength is his greatest weakness. Once left alone, it requires card investment to get him to key places. Still when inspired Snirk changes the game as a tough fighter that becomes a super fighter assassin.

Your favourite Khorne doggo makes his way to 2nd place. Base stats which can’t be laughed at of: 3 fury 2 damage with cleave on any crits, movement 4, a dodge and 4 wounds make him a tough aggressive fighter. Inspiring from successful attack actions is rather easy, especially with a 3 fury attack.

Upon inspiring Riptooth goes up to 3 damage on his attack with movement 5 and 2 dodge. Not only does he become more of a faster offensive threat but he also gets slightly tougher with 2 dodges. He’s a speedy bullet you can’t ignore who’ll also stick around while the rest of your warband moves ahead unimpeeded.

The downside is his inspire mechanic can be let down by poor dice rolls mean some investment is need, especially with 2 damage base. Let him finish of fighters wounded by Ghartok or Zarkus and have him hunt down foes when inspired to bring more skulls for the skull throne!

Little surprise to nobody, Skritch claims top spot as the greatest. Yes-yes there are many things to say about my favourite Skaven warlord. Movement 5 base, 1 dodge, 4 wounds with a 2 range 2 smash 2 damage attack that has cleave on a crit. He also has a unique action that resurrects a dead Clanrat on to any starting hex. He’s fast and hits hard but also has the 2nd easiest inspire mechanic in the game: being chosen by a “choose” gambit ploy.

Inspired Skritch improves by gaining damage 3 and a 2 dodge, this makes him into a combat powerhouse. With minor additions he can easily kill any 4 wound fighter, mitigate My Turn retaliations with his range of 2 and threatens the entire board. When Skritch is near the centre of the board, nowhere is safe from him.

Now believe it or not Skritch does have weaknesses. Left unsupported he will be torn apart and becomes extra vulnerable when not inspired. Yet with the right choose ploy balance and careful positioning, Skritch will be the bane of your opponents from bringing back Skaven to slaying fighters like a guided missile.