Some cards just have great mechanics.

Since Warhammer Underworlds has been released there have been some amazing cards out there. Today I’ll be focusing on the 5 cards which I feel are the best designed in the game. The main requisites are that said cards have had an effect on the game while being balanced (with a notable exception). These cards aren’t broken but are just very good. I won’t be ranking them as there’s no real winner but they’re definitely game-defining cards. 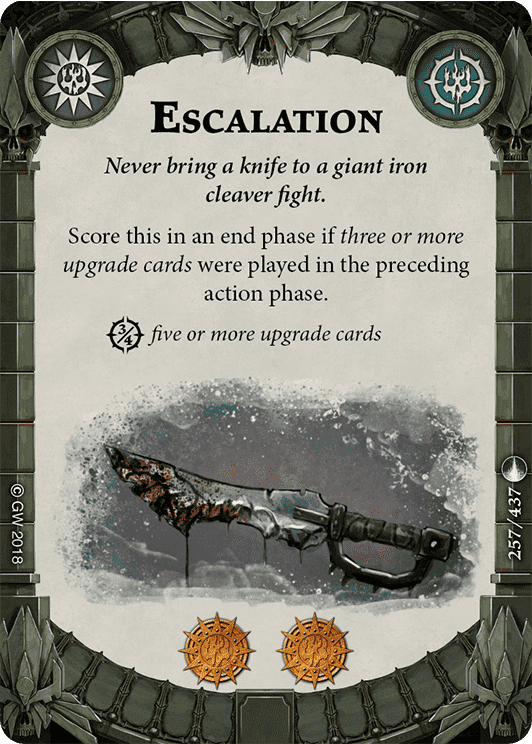 An old faithful that’s in nearly every single deck for a reason. It revolves around 3 upgrades being played which reward you with 2 glory. The key part here is that any 3 upgrades meaning your opponent can score this for you!

This in itself brings a whole mini-metagame to Warhammer Underworlds as sometimes you or your opponent will need to consider whether it’s worth playing 3 upgrades in a single action phase and rewarding your opponent with 2 glory. Or the great deadlock when you both play a single upgrade.

Escalation was restricted for a reason because it’s just so good and the game would be a very interesting place if it was no longer around (although I don’t think it needs banning). A very elegant card which can punish you for being greedy or reward you for your opponent being upgrade mad. 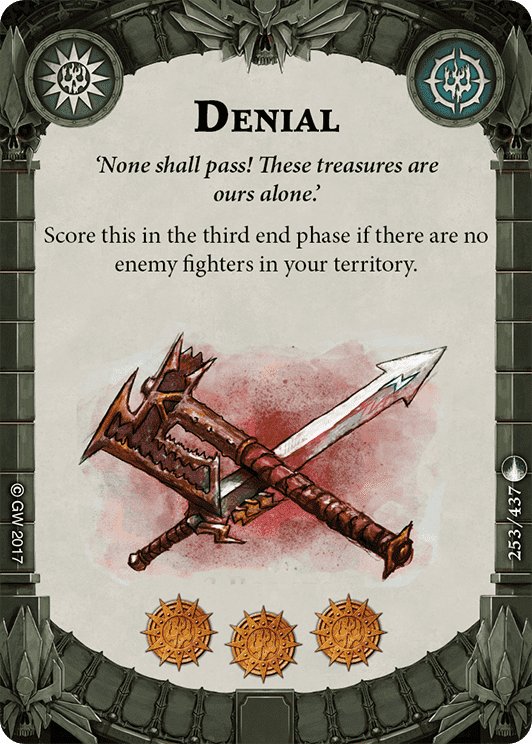 The first and only 3rd end phase objective on the list. Denial once again shares a similar theme with Escalation as it has its own mini effect on how the game is played.

Back in Underworlds’ infancy this was commonly run with Conquest and Contained. It was great for being a 8 glory swing for running at your opponent. Players quickly realised, however, that this card was fairly easy to stop as long as they sent an enemy fighter into the opponent’s territory. This forced Control players to interact more as that was just too much glory to concede but aggro players began this interesting situation where fighting occurred in no man’s land to prevent either side sending a fighter deep into opposing territory to stop Denial.

To this day Denial continues to be a very strong card that is easy to score if your opponent forgets about it while also being easy to stop if your opponent does remember. It offers such an interesting twist on the game by being both very easy and very hard to score at the same time which is probably why it’s been in both core sets. Denial is just a great all-around card for beginners and experienced players alike. 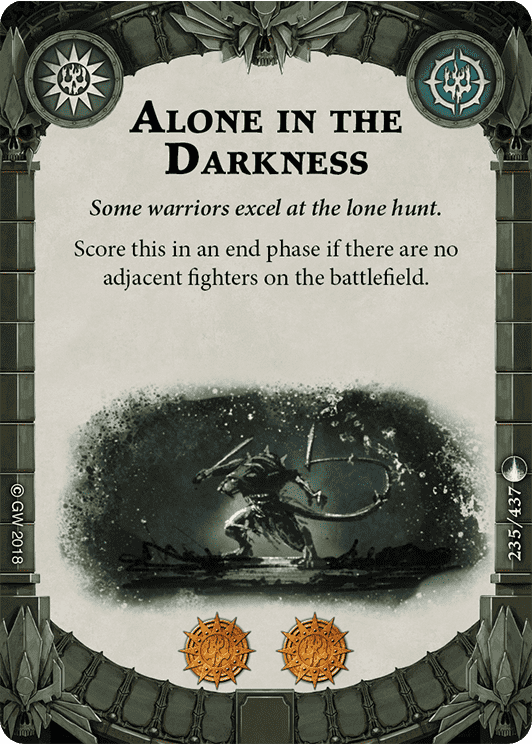 Once again we have another restricted card. Alone in the Darkness seems simple enough, 2 glory for no fighters being adjacent to each other. It shares similarities with Escalation as this can be scored by your opponent. Originally this was slept on by the majority of players due to how difficult this situation seemed at first. That was until Great Concussion.

While Great Concussion made this card waaaay to easy to score this again caused a minor game within a game scenario as players would try to keep fighters adjacent to each other if they didn’t have Alone in the Darkness in-hand whereas you’d be trying to force everyone apart if you did have it.

Even with the needed ban of Great Concussion this is still a rather easy to scored card depending on the state of the game. If warbands with lots of fighters are prevalent then this becomes almost impossible to score consistently yet if everyone runs 3 to 4 fighter warbands then the reverse occurs. It’s just a very wellrounded card that makes your consider about how to correctly position your fighters which is a skill in itself. 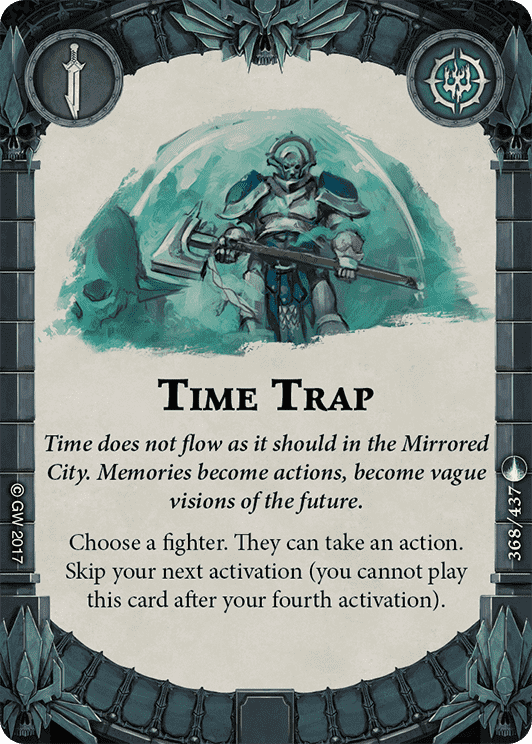 Yeah it’s banned but I’m discussing pre-FaQ Time Trap where you couldn’t charge after charging. So let me tell you why Time Trap is my favourite card in the game. You choose a fighter and then they immediately make a legal action. You then skip your next activation but this card cannot be played in your 4th power step. A legal action would be a fighter charging then being chosen by Time Trap to attack (but not charge or move again) or even move, play Time Trap, then go on guard.

As a card itself it was extremely flexible. I used it myself many a time to quickly score Change of Tactics as well as (more importantly) quickly killing fighters that were not able of being killed in my next activation (Insensate) or fighters being buffed up in the opponent’s power step.

It also had the perfect drawback. Missing your next activation is huge, especially if you charged then attacked. You’ll have to pass while your opponent gets a free hit (or 2) and can be even worse when you’re going first. If you were too greedy and your gamble failed, it could be disastrous.

The last entry and only upgrade, Soultrap has a fairly simple effect. When the equipped fighter is taken out of action, on the roll of a block or crit they are not and the card is discarded. Damage inflicted is ignored which makes this card great at saving your fighter from death.

However this upgrade had a big effect on the game. Ploy cards that did the same thing have to be held in your hand which potentially takes up a card slot for how long you hold on to it. Equipping it to your fighter forced your opponent to decide whether it was even worth attacking said fighter. Some players just straight up stopped attacking fighters equipped with Soultrap, especially if it was at full health.

Of course Tethered Spirit was kinda an improved version of Soultrap but it lost the balance its earlier cousin provided due to the free teleport on to a friendly starting hex. Soul Trap is rightly restricted but it changes how your opponent attacks. Of course the real secret is to always attack because Soul Trap won’t always go off, it’s just frustrating when it does.

Aggressive Commander is a very interesting objective. Go first every round for 2 glory. It’s something that can catch your opponent off guard in the first game and cause them to rethink things for game 2. If we get an objective that does the same for going second every round then players will have to start mixing up priority order unless they’re trying to score such a card themself. It would be another nice addition but only time will tell.

The Oaths for the Godsworn Hunt definitely deserve a mention. As I covered in their warband review, these cards offer a new tactical twist on the game by giving the controller +1 glory to the card if it is revealed in their first activation. You can either threaten the opponent by showing what you’re trying to achieve or bluff out as a misdirection to score something completely different. There are so many possibilities and it just opens up many avenues of player for Godsworn Hunt users.

Well that’s all for now. Hopefully you enjoyed my take on what I consider the 5 best designed cards in Warhammer Underworlds (as well as the honourable mentions). It’s been a pretty busy week for me but if you’re itching for some Mirrored City action, tune into Warhammer TV on Saturday 10am BST where they will be streaming the Warhammer World Grand Clash! I’ll be there so feel free to say hi if you’re around too. Maybe I’ll even be lucky enough to get on stream if I can roll some crits.