There’s more than just fighting in the Mirrored City…

Don’t worry dear reader, I’ve not abandoned Warhammer Underworlds! As you may know, I have a long history with Warhammer 40k and Warhammer Age of Sigmar. As a way to prevent burning out and also relax a bit I’ve started a Slaanesh army which I plan to bring to Warhammer World for Heat 3 in June as part of their Grand Tournament series. Along the way, I thought it was worth posting my progress with the army (mostly on Twitter) as well as some useful resources that I’ve found.

Now if this isn’t your cup of tea then no worries! I’ll still be keeping up with my regular Underworlds schedule but my progress of painting warbands will be stalled to some degree.

Why I think this is worth bringing up is twofold. Firstly a lot of my friends have got into Age of Sigmar because of Warhammer Underworlds. The 2 games are linked from a narrative perspective as they’re in the same universe. The city of Shadespire itself is trapped between the realms of Hysh (light) and Ulgu (shadow). Underworlds miniatures can also be used in Age of Sigmar too!

Secondly I’m also going to dedicate a new part of my website to Age of Sigmar in the form of useful websites. They’re great for new and experienced players alike as they venture into the Mortal Realms. These websites have helped me so much in getting back into Age of Sigmar and will be extremely useful for you. Not only that but two of the websites I’ll have featured will be linking my own website for their own viewers who are interested in Warhammer Underworlds.

So remember, check out the upcoming websites here or find them via the website’s main menu.

Games Workshop’s own Age of Sigmar website is a great resource. It covers the background of the game, factions as well as GW’s own articles for Age of Sigmar. You’ll learn the basics including amazing painting tutorial videos from Warhammer TV that’ll have you painting like a pro in no time.

AoS Shorts is an independent blog ran by a top bloke (he’s a Warhammer Hero!). This place covers pretty much everything related to Age of Sigmar from the latest FAQ updates all the way to the most recent tournament results. It’s also the first website I’ll be partnering with.

Despite being based in New Zealand, Dan covers all Age of Sigmar news internationally so you’ll find his information relevant no matter where you are. He also does amazing in-depth reviews, check out his Skaven review for example. Everything is super detailed and helps you no matter what your skill level is with Age of Sigmar.

The Honest Wargamer is another great independent website that focuses on Warhammer 40k and Age of Sigmar content. Their Sigmar content is some of the best around and geared at improving your gaming skills. More for people looking to improve their progress competitively, don’t be scared away as their weekly Twitch shows are just so much fun to watch.

The site also garners tons of army list guides written by various tournament players across the world and is entirely fan powered. It gives a great scope for what lists are out there as well as how to play them.

Now the latter two websites have been amazing sources of information for me. Heat 3 is GW’s premier competitive event and I want to do as best as I can but also with a good-looking army. Using both sites I’ve crafted a very Slaanesh army list that uses speed to hit the enemy fast while I dazzle them with my painted miniatures.

It may not make sense to a lot of you but it’s a list that overwhelms the opponent with graceful speed while making it harder for them to hit back. It’s not finalised yet but that is the most recent list as to which I have yet to test. I do own all the models now however. Speaking of, let me show you one.

That is my work in progress (WIP) test model. She’s a kitbashed Herald of Slaanesh. The skin is blended up from a purple basecoat with numerous thin coats of a custom paint mixture via my airbrush. How will I be able to replicate the skin tone for my entire army? Who knows. I went for a simple and quick scheme then ended up with this. I’m insane.

Still it will all look amazing once I get it all done. Eventually. On deadline. Before the tournament with no need for sleepless nights of painting *cries*.

But outside of my new Slaanesh army I also have lots of previous Age of Sigmar miniatures for your viewing pleasure. 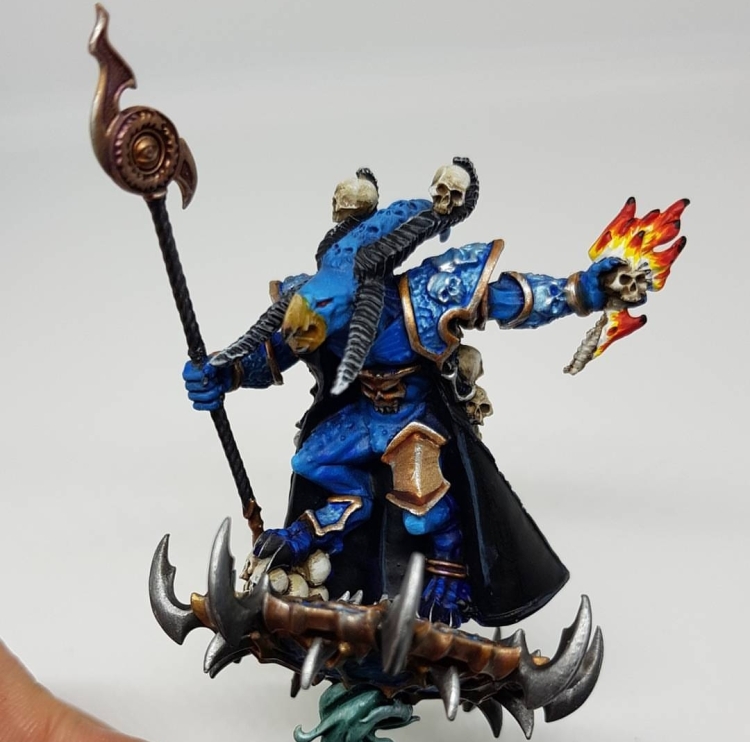 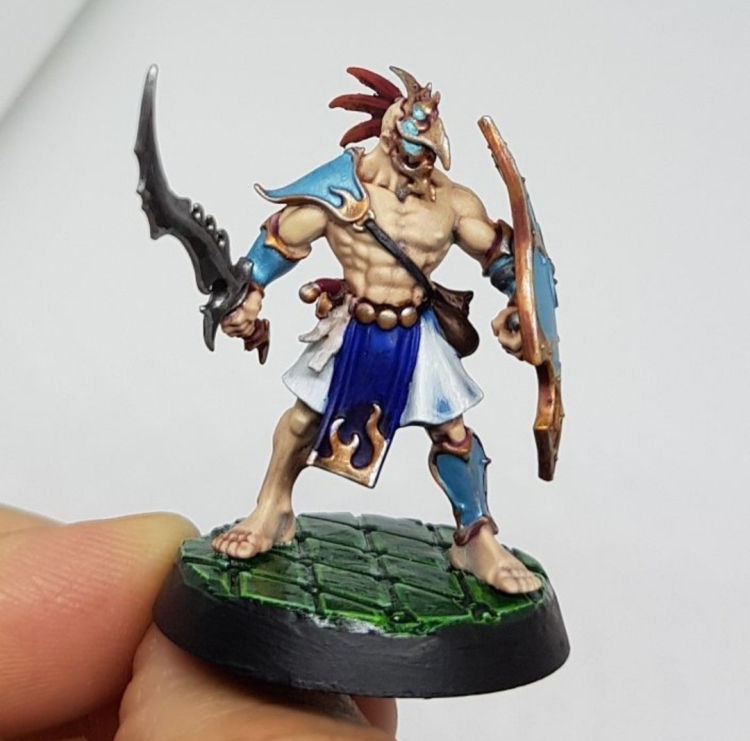 With all that covered I hope you’ll enjoy my journey with Age of Sigmar. I’ve qualified for the past 2 Grand Tournament finals so I’m hoping to make it a 3rd for this year. Although my main goal is to have fun and be a fun opponent to play against while also being competitive which is a balance I’ve been able to strike in Warhammer Underworlds.

Once again check out the websites on my Age of Sigmar page here or via the website’s main menu. Hopefully my success with Underworlds carries over and I continue to roll many err I mean 6s.

3 thoughts on “Getting Started with Age of Sigmar”