Welcome to a special Warband Showcase article. This time it’s brought to you by Paul and his amazing Lunchsworn Hunt that you may have already seen on the internet. I think the hobby side can often be overlooked with Underworlds so today I’m happy to host some beautiful creative hobby expression. So without further ado, I’ll leave you in the hands of Paul.

This blog obviously belongs to John Wynne Rees, Underworlds strategic genius, owner of more shadeglass trophies than the Katophranes. John’s brain deals with cards, dice probabilities and optimal positioning strategies like the rest of us breathe, and having won glass with every warband he’s probably passing the time waiting for Beastgrave trying to win some more with Eyes of the Nine and no restricted cards or something similar.

Me, I do enjoy the thinking-puzzle element to Underworlds, but at heart I’m just not a very competitive player; for me, playing games is just an excuse to show off what I’ve just finished painting, or a reason to finish painting something new. John and I have met a few times at my local events (where he beats me soundly) at Wayland Games in Hockley, Essex, and he’s kindly asked me to share some of my creations here on the blog.

When I was a kid, my mum likes to tell me that whatever I was doing, I was happy as long as I had an action figure clutched in my hand. Spider-Man, Action Man, little star wars Boba Fett, whatever. If I dropped it or lost it, there was trouble. Now the world has moved on a bit, but I don’t think people change that much, and my main hobby over the last thirty years or so has been messing about with and chopping up toy soldiers to make (to my mind, at least) slightly cooler toy soldiers.
Underworlds gives you a lot of freedom to mess about with what the models look like. With only three or four models in most warbands, it’s really easy to personalise or completely replace the models, without confusing your opponent. Want to play a different-looking Mollog? Swap his club for a boulder, or use one of the brilliant Rockgut Troggoths, and it’s still obvious what’s what. If you’re feeling adventurous, use an ogre, minotaur, treekin, crypt-ghoul or just about any other large base model that you like and it should still be pretty obvious that that big badass-looking guy is standing in for Mollog. As a bonus, you then get to re-imagine the henchmen to fit. Ghoul with loads of mushrooms growing out his back as the Spiteshroom? Sylvaneth dragonfly spite as the Bat-Squig? No problems. One of the best thing about Warhammer Underworlds for me is thinking of unusual, original or just plain weird twists to make the warbands stand out.
I don’t always convert or change the models. It depends on how much I like the originals, and if other people in my gaming group use them already. I play quite regularly against my son’s slightly converted Slaaneshi Godsworn Hunt, so instead of assembling my Hunt out of the box, they sat there while I thought of something interesting to do with them.

When thinking about conversions or replacements, I just try to simplify the models to what they really need to be. The barbarians of the Godsworn Hunt are basically a fighter/mage leader, three fairly ordinary guys with a bow, a sword and an axe respectively, a girl with a javelin, all human or basically human-sized, and a dog/monkey/bird/animal of some kind. I had a good think about what Age of Sigmar models I could replace them with. For a while I liked the idea of a Free Cities mercenary wizard, with a few bodyguards, and a gryph-hound. I wasn’t totally convinced though, so it just stayed in the back of my mind.
When the Halfling Blood Bowl team was released, I loved them. I usually love comedy models, and these guys are some of the most characterful sculpts I’ve seen in a long time. Their Blood Bowl tagline, “Blood Bowl on Hard Mode” seemed to fit what people had been saying about the Godsworn Hunt being hard to win with, so subbing the humans with chubby little halflings would let me use these brilliant new models, would look funny, and would seem to fit the rules and feel of the warband being a fragile and fairly ordinary bunch of misfits who don’t win much. I was sold (I’m aware that in the hands of a skilled player, the Godsworn can be brutal. But in my hands, they don’t win that much.
So I started work on the Lunchsworn Hunt).

You get 6 different sculpts in the Halfling box, so I built five bodies and stood them next to my son’s models. I trawled my bits box for human-sized weapons that didn’t look too ornate or complicated, and just made a big pile of suitable bits. As I was building them, they started to make me think of a bunch of enthusiastic and hopelessly naïve idiots that had decided to gatecrash the Age of Sigmar universe (seeing as someone rudely forgot to invite them to the party) and had just grabbed random weapons and comedy frying pan helmets from giant dressing up box of adventurer’s kit. Like a bunch of D&D players on their first dungeon, these guys are seriously out of their depth.

I went for a gloriously over-the-top pose that really puts the focus on his sword (from an old High Elf kit). He looks like he’s just found Uncle Frodo’s sword Sting in a box under the stairs, and he’s holding it up to show it off. In games, he loves going off on some massively risky assassinate-the-boss style mission, armed with the Fated Blade. Usually doesn’t work, but he’s just so proud to have found it, he can’t really help himself. Bless ‘im.

Recipient of the brilliant Gordon Ramsay head from the kit, Joe got a javelin from the Marauder horse kit, and not much else. Generally ends up trying to contribute by throwing the javelin at someone before he dies, and to be honest if he manages that I consider it a win.

Good old striding-cheerfully-along-to-almost-certain-death Ollie got a bow from a Night Goblin (like many others, I’ve got many many Skull Pass goblins sitting in a box somewhere) and an arrow. Getting the two halves of the arrow to line up in the hole drilled through his hand was a pain. Shows how delightfully underprepared he is that he only actually carries the one arrow, and look at the confidence in his face. He loves it.
To be fair, he usually dies before he fires twice anyway.

Axe-wielding Grundadd is actually a bit of a dangerous loon, so he got a pretty large axe, made from an Empire Militia axe head spliced to a Night Goblin spear haft and arm. He needed a bit of green stuff on the shoulder. My greenstuff skills can just about stretch to making cloth, so he got a sort of ragged cloth sleeve to blend the new bits into his untucked shirt. Grundadd’s favourite trick is to equip Great Strength to immediately inspire and go up to Damage 4 on his axe, then try to one-shot someone who has trod on his lawn or something. Usually top priority to get murdered by my opponents for the same reason.

I like to think that as the boss, Big Thedd got the longest rummage in the adventurer’s dressing up box. Ridiculous furry cape that drags on the ground? Check. Comedy wizard’s hat? Check. Jester’s whack-bonk style stick? Check. Got a seriously grumpy looking face, so I imagine he’s permanently shouting at the others to stop being so rubbish and actually win a game. Like Grundadd he’s actually pretty dangerous in combat once he’s inspired, and the idea of a wizard just ignoring spells and beating face with his wizard stick amuses me greatly.

Grawl gets a lot of stick as being one of the worst fighters in the game, so the challenge here was to make him look so utterly rubbish, that if he ever did anything, my opponent would basically die in shame. Step forward Mr Attack Squirrel. The squirrel’s tail is wrapped around a halfling’s head, so again my dubious greenstuff skills came to the fore covering a halfling’s noggin in greenstuff to turn it into a rock.
Surprisingly useful in game, if I draw Calculated Risk or Martyred then Squ-Rawl promptly gets served up to the Lunch Gods without a second thought. Otherwise I try to set up a Clash-of-the-Titans style mini-battle between him and something of his size and importance, like the Brimstone Horrors or an arrow-wielding Night Goblin. If things have gone really wrong, he gets tooled up with Great Strength and Concealed Acorn and goes off to try to seek his embarrassing revenge on the enemy leader. Top fun.

These were painted before the new Contrast paints, so my standard process was to block in the whole model in base coats, shade the whole model top to tail with a wash of Agrax Earthshade, then go back and highlight with the original colour and one or two highlights, saving the most attention for the important bits.

Green was Waaagh Flesh, then Loren forest and a tiny bit of Moot Green.
The white was Celestra Grey (I probably should have started with Ulthuan, as the final effect was quite grubby) then Ulthuan Grey and finally up to white.
The bases were drybrushed with a bunch of different browns including XV-88 and Zandri Dust, and the plants are Mountain Tufts and Lowland Shrubs from Army Painter. 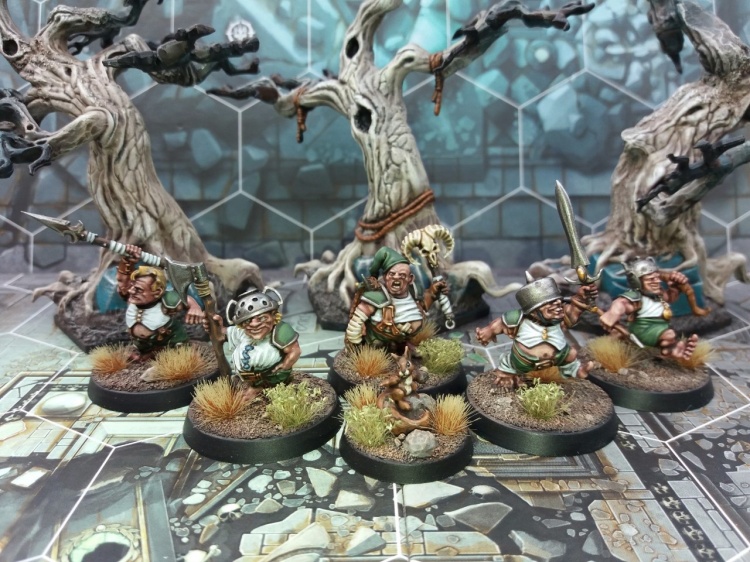 And there you have it! I have really, really enjoyed playing with these happy little chubsters, far more than I would have done with the normal models, simply because I feel like they’re mine, and they make me laugh, win or lose (usually lose.)

Hope you enjoyed it, and until next time, may you roll crits like John does 🙂