Welcome to my first warband review for Warhammer Underworlds Beastgrave! Today I’ll be going over Grashrak’s Despoilers. These are the roving Beastmen found stalking the halls of Beastgrave. Once again I got these for free to review thanks to Games Workshop giving me the Beastgrave core set to review. Let’s see how this starter warband fares! 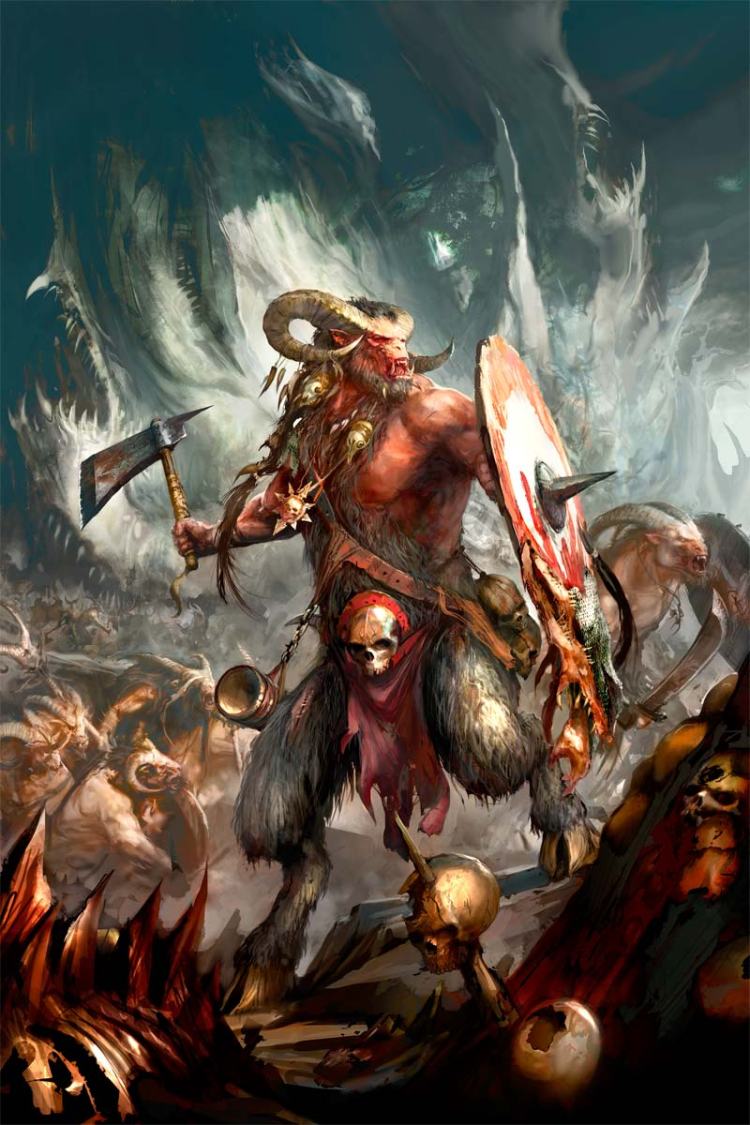 Grashrak’s Despoilers hate all things pure and untouched like all Beastmen do. Driven by their primal beastial urges and the influence of Chaos, they commit dark deeds of blood and slaughter. Having created a path of destruction they now found themselves in the Beastgrave, drawn into the colossal mountain beast via its numerous sprawling tunnels.

Led by Grashrak Fellhoof, the warband enacts horrendous actions of befoulment due to his Chaos-influenced visions thanks to being a powerful Brayshaman. His prophetic nature is the only thing keeping his fighters in-check and turning on him.

The warband is fuelled by enteral rage and lust for blood. Only the higher hatred for their opponents prevents them from lashing out each other. They seek the bones of their foes to prove that they are the apex hunters while ensuring to despoil everything they come across. 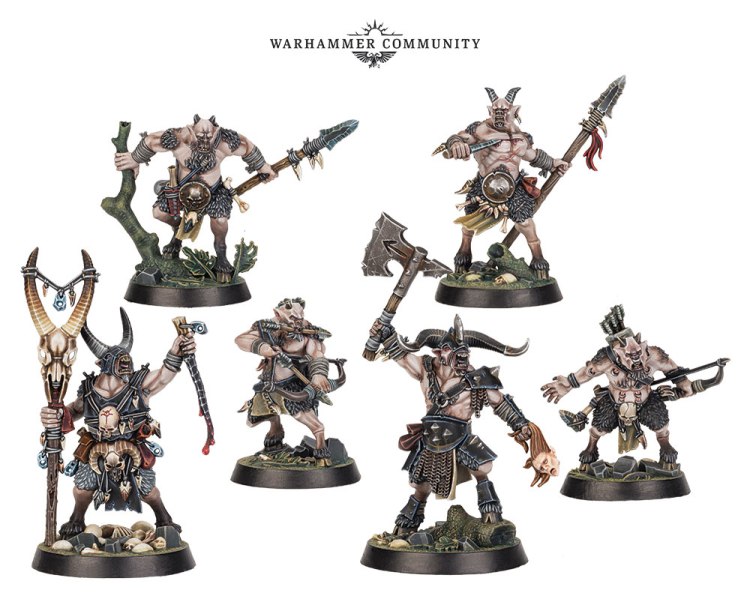 Grashrak’s Despoilers are a 6 fighter warband consisting of Grashrak the Brayshaman, Draknar the Bestigor and 4 other Ungor fighters. Each is a Beastmen model designed for life within the Age of Sigmar. Festooned with bones, trinkets and scavenged material, they truly represent the roving Beastmen. My favourite has to be Draknar with his mighty axe held triumphantly and a freshly decapitated head grasped within his left hand. 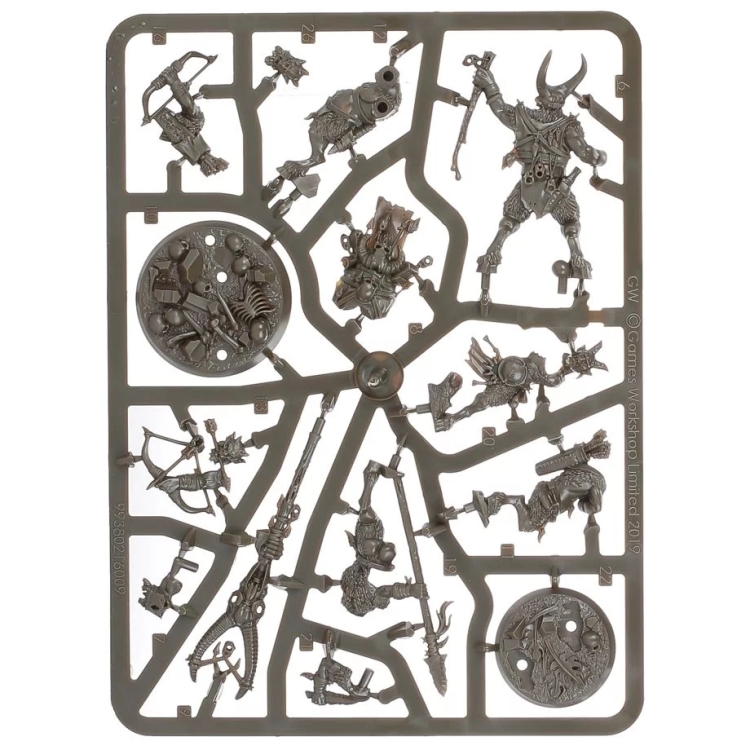 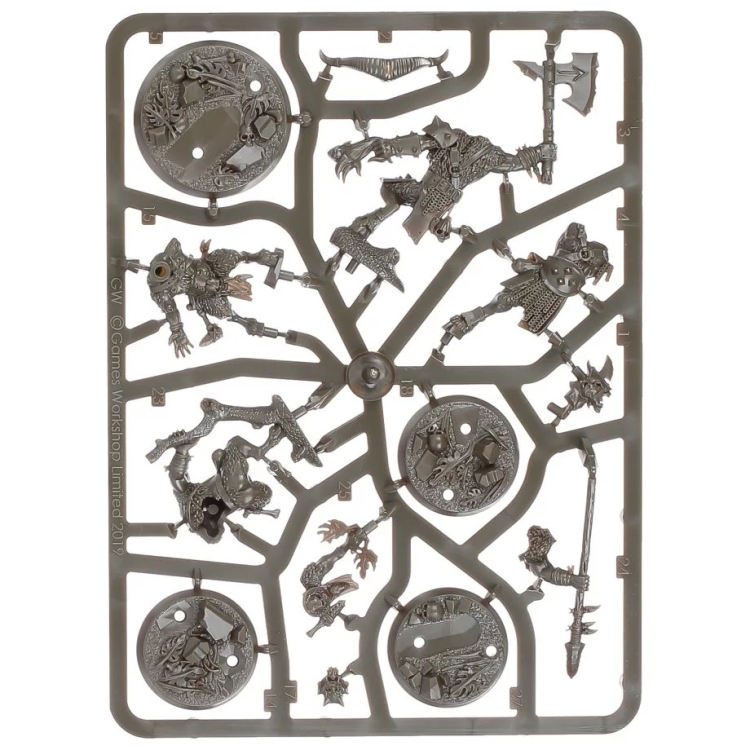 The sprues come in a dark-earth brown which helps them standout and in contrast to Spiteclaw’s Swarm’s brown plastic miniatures. As always the models go together fairly easily, just be careful with the Ungors due to their smaller nature and more fragile weapons.

Fighters
This warband contains 6 fighters as I mentioned earlier in the review. They share the same inspire mechanic which revolves around having 2 or more enemy fighters out of action. It’s straightforward but heavily matchup dependent on whether it’s easy or difficult. 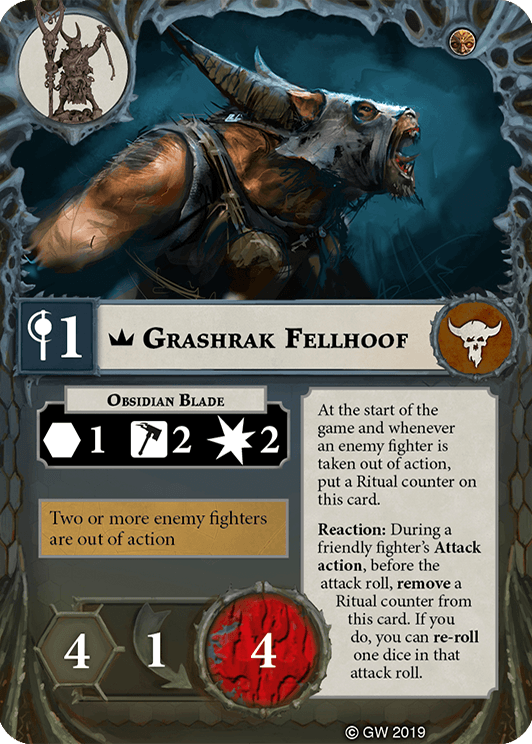 Your bestial leader. Grashrak starts off as a level 1 wizard. He has an Obsidian Blade which is range 1, 2 smash and 2 damage making him alright in combat. He shares the movement characteristic of 4 for the warband and is the only 4 wound fighter of the Despoilers.

The ritual counter mechanic is where he really shines. He starts off with 1 and gains another whenever an enemy fighter is taken out of action. You can use one before the attack roll step to re-roll a single dice in the attack roll. This helps make these Beastmen surprisingly accurate. Remember it can be used by any friendly fighter at any range as long as you have ritual counters and Grashrak is alive. 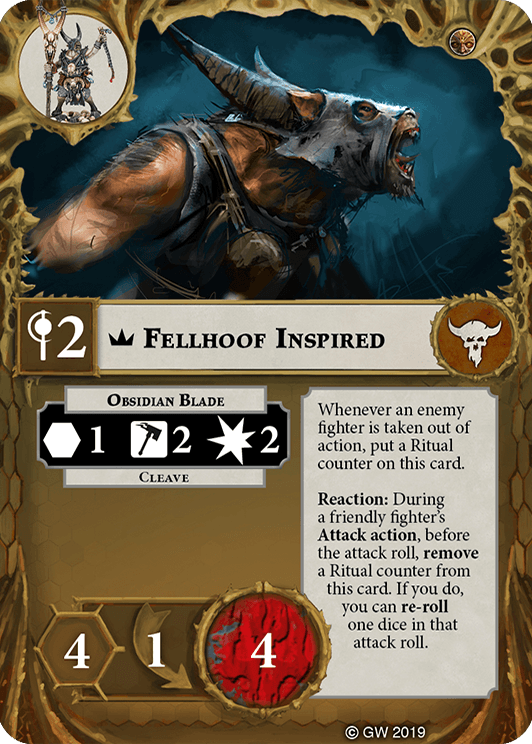 Fellhoof inspired gains cleave with his Obsidian Blade and also becomes a level 2 wizard. These buffs are enough to make him more reliable in combat as well as magic. It’s not necessary having him inspired but it’s still a nice boost. 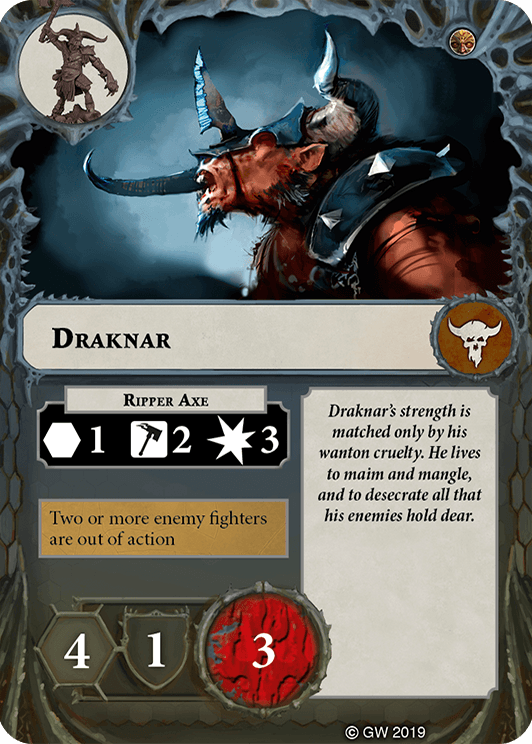 Draknar is the Bloody Saek of the group. He’s your muscle (beast)man. Despite being 3 wounds this Bestigor packs quite the punch with his Ripper Axe being 2 smash and 3 damage. He also defends on blocks instead of dodges.

Draknar inspired becomes even more of a combat monster. His fighter characteristics remain unchanged but his Ripper Axe goes to 3 fury with cleave while still being 3 damage. 3 fury has the same general success rate as 2 smash but with a 42.1% chance to crit compared to 30.6% with his uninspired profile. The cleave is what tips things over but he also gets better in attacking with supports. 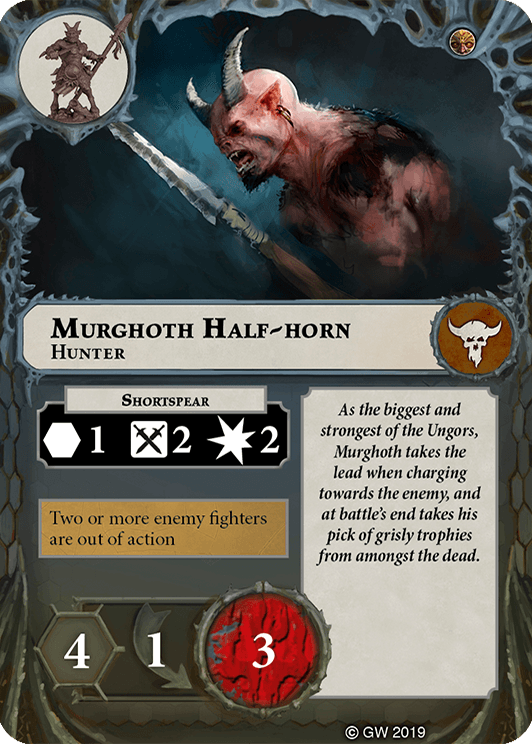 Murgoth is the mightiest of the Ungor within Grashrak’s Despoilers. He packs a tasty 3 wounds along with a 2 fury 2 damage Shortspear attack. He also has the Hunter keyword which opens up a lot of mechanics for him. 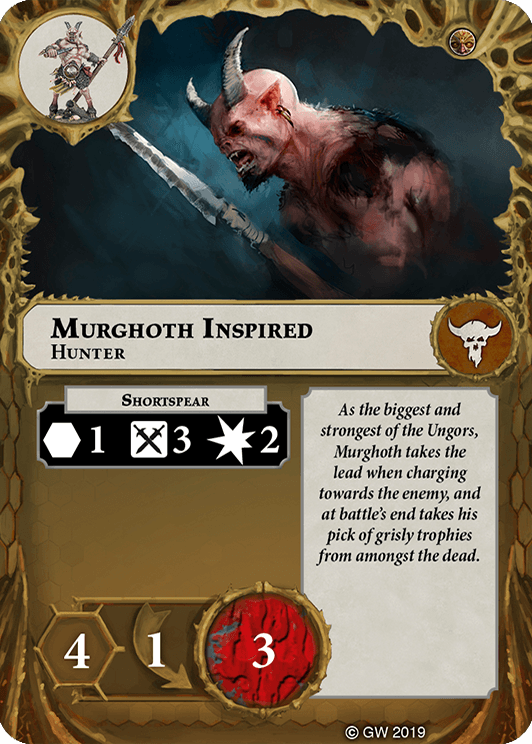 Murgoth inspired has his Shortspear go from 2 fury to 3 fury. He just becomes more reliable in combat. Short but sweet. 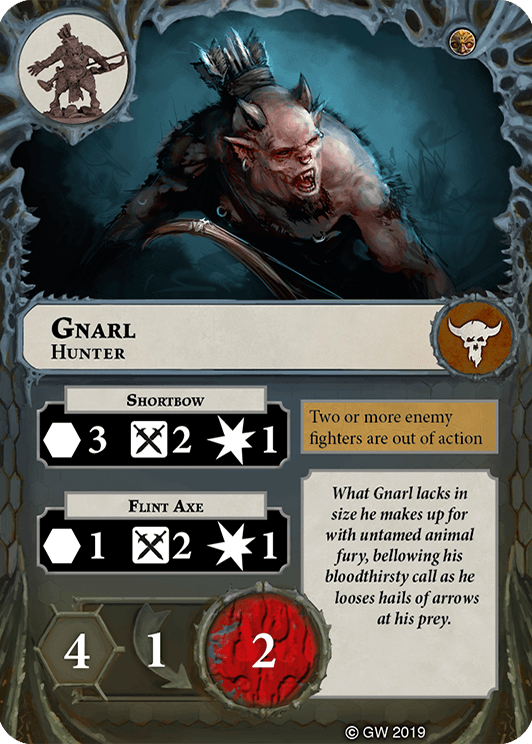 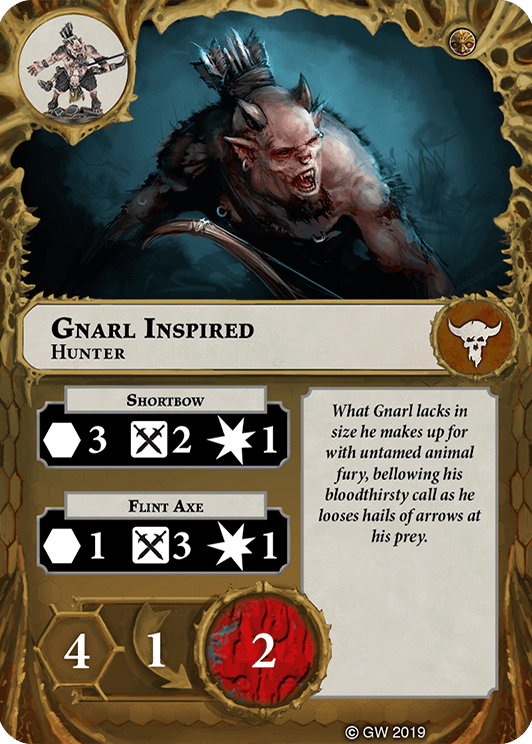 Gnarl inspired has his Flint Axe go up to 3 fury. 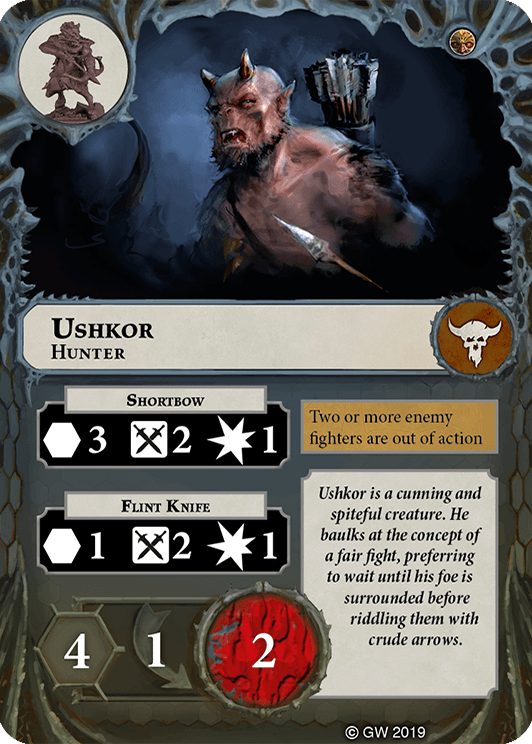 Ushkor is exactly the same as Gnarl while not inspired. 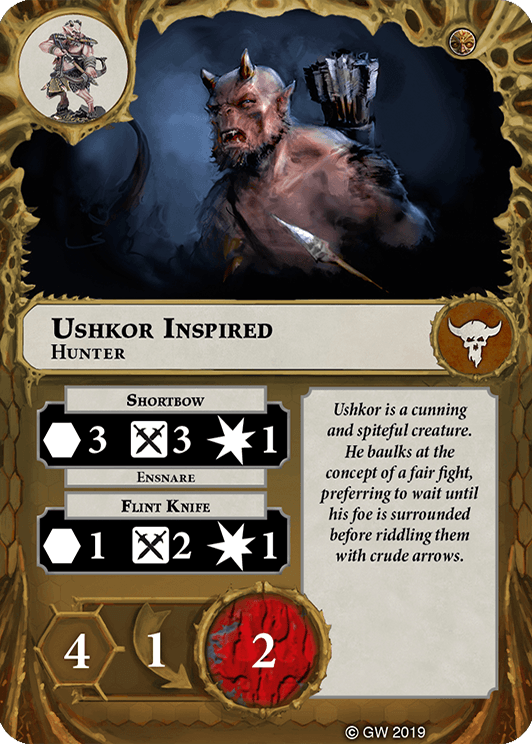 Ushkor inspired however gains 3 fury to his Shortbow instead of his Flint Axe. It also gains Ensare meaning he can reliably pick away at those pesky dodge fighters from afar. 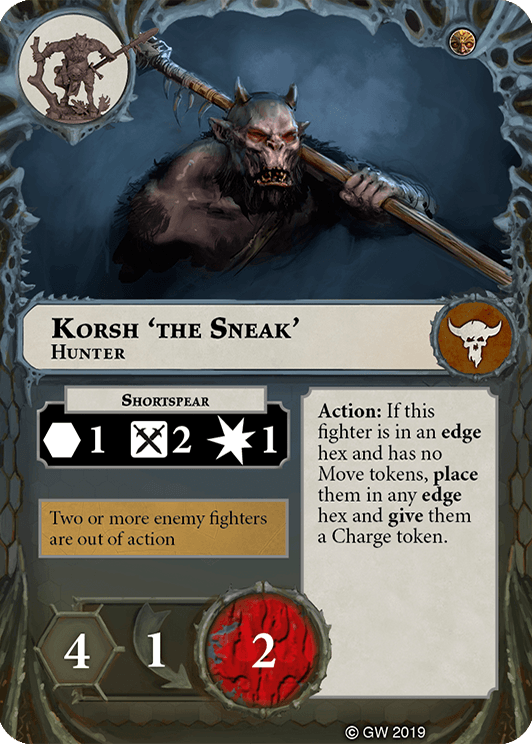 Korsh is the oldest of all the Ungors with an impressive beard to match. He only has a Shortspear but really shines due to his unique action. This allows him to be placed from 1 edge hex to another. He gains a charge token after using this action but it’s very versatile and allows you to setup a lot of plays while also helping to cover long distances for board control. 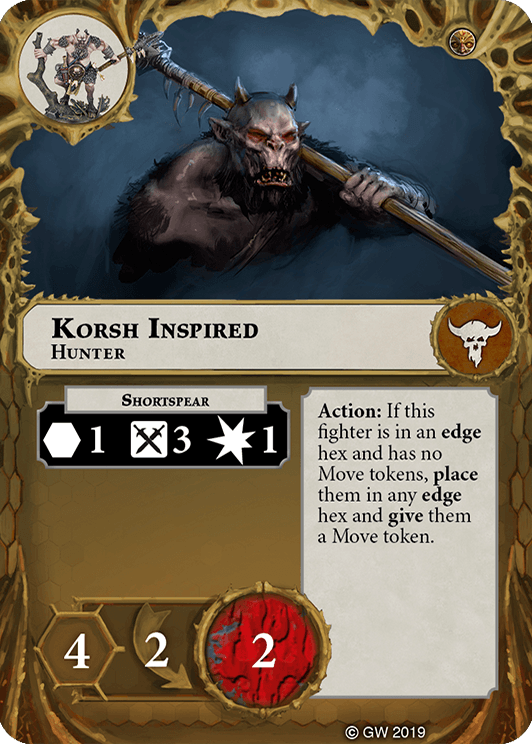 Korsh inspired goes to 3 fury with his Shortspear and increases his dodge characteristic to 2, making him more survivable when using his redeployment action. Plus he now only gains a move token instead of a charge token when using his ability!

Cards
Now we get onto the card part of my review. As always I’ll be going through the cards I consider alright and then my top picks.

Blood Ritual involves you killing a minimum of 1 fighter. It’s alright but I’d rather use my ritual counters to get successful attacks instead of stockpiling.

Bloodshed is alright but too matchup dependent.

Swarm the Battlefield is a decent objective but takes a bit of a setup and dictates your positioning.

Taint of Ruin is just let down by needing 2 spells and that Grashrak has no innate spell meaning it’s entirely card dependent. Worse when stuck as a level 1 wizard.

Bestial Cunning is an overcharged Ploymaster. Just amazing. Being gambits means both spells and ploys contribute to scoring it.

Conquerors is a nice reliable objective for 1 glory.

Despoilers is amazing. Surge Our Only Way Out. Remember it’s only scored after an activation. It would be very tasty if this existed as a universal card…

Killing Blow is a great killing objective. Perfect for those 1-hit kills.

Proven Superiority is a nice 2 glory card. I’d happily dedicate my action phase to killing the opposing leader for 2 glory.

Raiders is just amazing. Earn glory for what you were going to do anyway.
Stampede and Raiders work together in unison. Very easy with the warband’s high movement and access to multiple ranged attacks.

Survival of the Fittest is a slightly worse Khorne Cares not. Still amazing. Score even when you’ve lost most of your own fighters!

Devolve is great if it wasn’t cast on a crit. You have a 16.6% chance to cast this while Grashrak is not inspired, going up to 30.6% when he is. Should have been 2 channel.

Skirmisher is really useful for scoring Keep Them Guessing. Outside of that it has little usage.

Weight of Numbers helps with crowding the opponent but too situational for my liking.

Bestial Vigor is a relatively easily cast spell (50% while uninspired and 75% when inspired) for a nice movement buff.

Baying Anger is a faction Determined Effort. +1 dice is always welcomed.
Baying Hatred boosts the damage of range 1 and 2 attack actions by 1. A nice burst of damage.

Blood Taunt is Blood Offering but better. Use defensively for a free guard token or counterattack with +2 dice. Damagingly versatile!

Vile Invaders pushes any 2 of your Hunters up to 2 hexes. Not limited to Ungors, make Draknar or Gashrak Hunters to benefit from it too!

Blinding Attack is alright at 3 fury plus the 2 damage at range 1. Just a shame it’s only restricted to 1 Ungor.

Cursed Flint gives you 3 fury, 1 damage and cleave. Locked in only foe Hunters makes it even more undesirable.

Dogged Survivor allows for potential pushes but I wouldn’t want to put Korsh in harm’s way.

Endless Hatred would be amazing if it wasn’t limited to Gnarl.

Jabbing Spear, for if you wanted your Shortspears to be range 2 for some reason.

Bloodcrazed is an extra Great Strength that works off of the target or equipped fighter being wounded. Really good.

Heedless of Pain may be restricted to Draknar and Murgoth but another Great Fortitude is great.

Check out my Beastgrave core set review for all the currently available Beastgrave only universal cards that are released at the moment.

Primarily built off the strong faction card foundations, this deck uses the currently limited Beastgrave universal card pool to make it more efficient at aggressively grabbing enemy territory while keeping the opponent out of your board.

This deck follows the same principles as the Beastgrave deck. The added universal cards just boost its efficiency. Calculated Risk is super easy to score and I really like Versatile Fighter with the Ungors. Two Steps Forwards helps with objective play and moving up. Regal Vision and Blazing Soul allow for early inspiring to get quick kills. Combine Trophy Taker and Tome of Offerings om Draknar for 3 glory kills!

Warband Overview
Grashrak’s Despoilers give us a good first impression of Beastgrave warbands. They’re tricksy but powerful and full of character. Their faction cards are incredibly strong and make up for their weaker fighters. With the right cards and plan you can pull off powerful victories. Fun to use with a high skill ceiling.

That’s time on my first Beastgrave warband review. I’d highly recommend the Despoilers. They’re fun no matter whether you’re new to Warhammer Underworlds or an experienced player looking for new challenges. If you want to get Grashrak’s Despoilers, buy them from here.

So what are you waiting for? Set forth, ravage the Beastgrave and roll crits!