Welcome to my second warband review for Warhammer Underworlds Beastgrave! Today I’ll be going over Skaeth’s Wild Hunt. They are the noble Kurnothi, Warhammer Underworlds’ first Aelven warband, seeking to purify and seal the Beastgrave. Once again I got these for free to review thanks to Games Workshop giving me the Beastgrave core set to review. Let’s see how this starter warband fares! 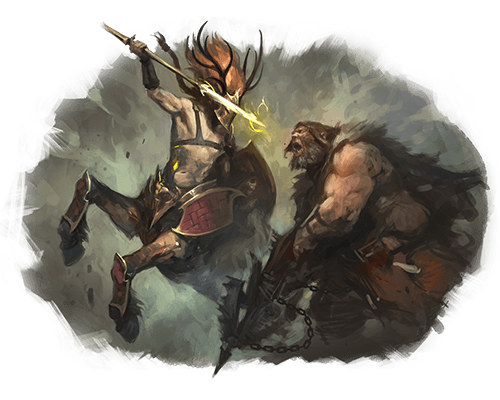 Skaeth and his Wild Hunt are Kurnothi, Aelves dedicated to the fallen Kurnoth who stood as god of the hunt and ally to Alarielle. Embracing the power of nature these Aelves now bare the traits of forest animals due to their bond being so close. Despite always yearning for the hunt they seek to purify corruption and rid the realms from chaotic taint.

Together these fighters operate as one efficient beast. Once a target is located they pounce upon it in successive union until their prey is nothing more than a lifeless carcass. There is little in the mortal realms that can match their speed and agility.

Drawn to the Beastgrave by visions from Alarielle, Skaeth’s Wild Hunt seek to kill all those afflicted with Katophrane curse of eternal life so that their infection does not spread across the realms. They have seen what will come if their task is failed. Skaeth’s Wild Hunt will not fail Alarielle and will complete their mission, even if it means spending eternity fighting in the Beastgrave.

Although Skaeth secretly believes that if he can journey to the centre of the Beastgrave, he can strike at the mountain’s heart with a strong enough blow that he will kill the Beastgrave, if such a thing is even possible… 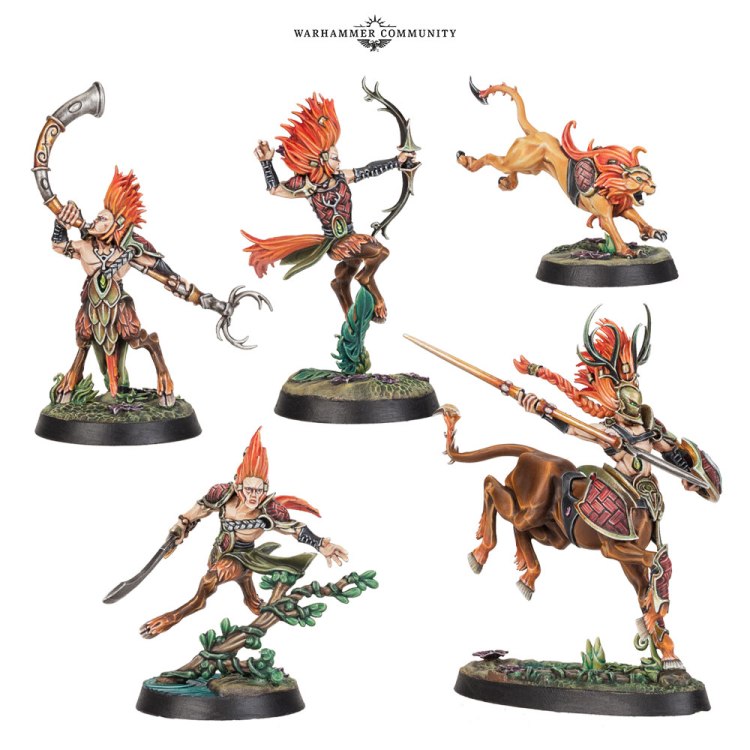 Skaeth’s Wild Hunt consists of 5 highly detailed plastic models. These are Skaeth the Huntsman, Karthaen, Sheoch, Althaen and Lighaen. Each miniature shows the ties the Kurnothi share with nature while still retaining an Aelven feel with finely crafted weapons and armour. My favourite miniature has to be Skaeth himself. Half Aelf, half Kurnothi stallion. He represents the hunt itself, posed mid-strike with his javelin at the ready.

The warband come in a spring green colour, similar to Ylthari’s Guardians. The models are a joy to put together but you need to be gentle with the slender Aelves. Slightly more complex to build compared to other warbands but still just as rewarding.

Skaeth’s Wild Hunt consists of 5 miniatures, 4 Kurnothi and Malkyn. They all boast a high movement value but are offset by their low wounds total. The warband universally inspires off having a charge token at the end of an action phase. Generally this means each model needs to charge to inspire (unless you use something like Bag of Tricks or Tome of Glories etc). It’s reliable but can trick you into bad positions if you’re not careful, plus you won’t always be able to charge with every model. 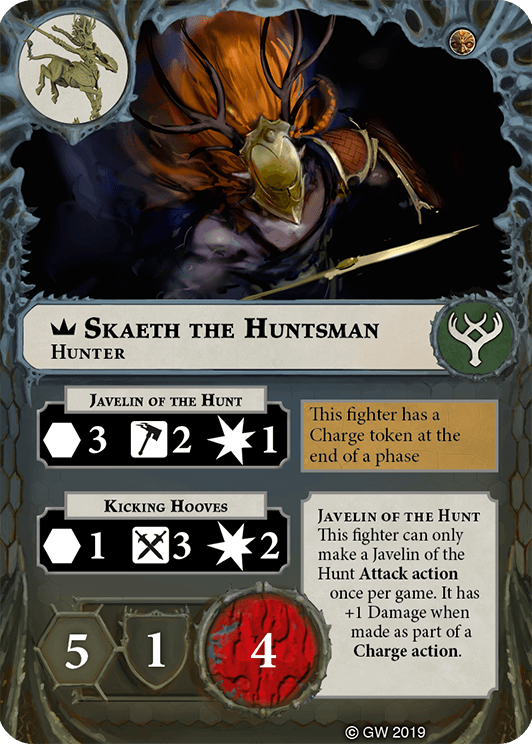 Skaeth is the leader and packs an impressive profile to match. Javelin of the Hunt is a single use attack with a range of 3, 2 smash and 1 damage but doing 2 on the charge. Next he has Kicking Hooves which is range 1, 3 fury and 2 damage. With his move of 5 it makes his threat range 8 with the javelin which is pretty insane. He also defends on a block and has 4 wounds. Plus he’s a Hunter too!

Skaeth inspired has a few improvements. His Javelin of the Hunt goes to 3 smash from 2 smash. His Kicking Hooves gain Scything which make him amazing at charging into densely-packed fighters. Finally he goes to 2 block, making him extra durable. 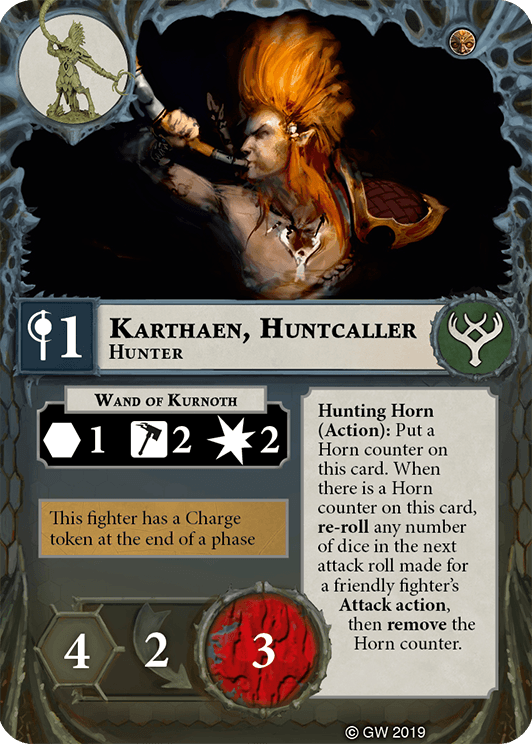 Karthaen is the wizard of the group, starting off as a level 1. His wand of Kurnoth is range 1, 2 smash and 2 damage. He has movement 4, 3 wounds and a tasty 2 dodge.

Karthaen really shines with his massive horn, big even for an Aelf. His Hunting Horn can be used as an action to out a horn counter on his fighter card. When there is a horn counter on the fighter card you can re-roll any of the dice used in the next attack activation and removed a horn counter. Basically you always use this at the start of your action phase. You can even stockpile horn counters. Blow twice in an action phase to get re-rolls for the attacks in the following or spend 4 activations blowing your horn. Toot toot. This is probably not how the action is intended to be used so I’d wait for an FAQ before going trigger-happy with the horn. 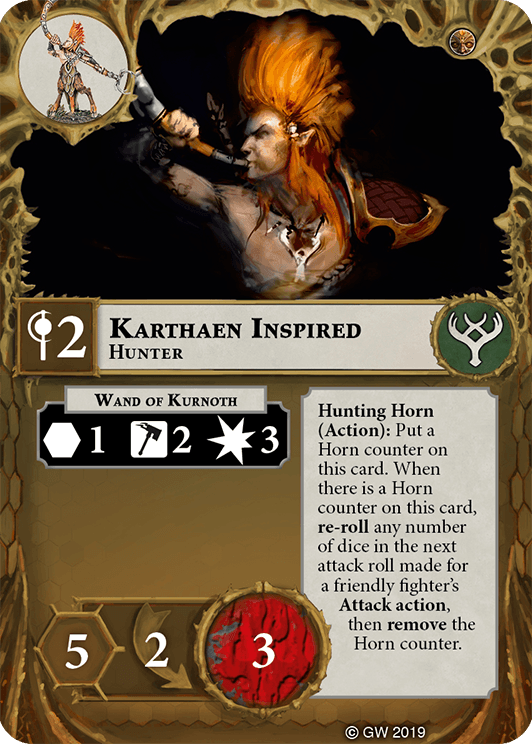 Karthaen inspired becomes a level 2 wizard for an extra magical boost. His wand goes to 3 damage and movement to 5 making him quite a surprisingly fast combat beast.

Sheoch forever tracks the elusive blue steel. He wields Shaethshir which is 2 smash and 2 damage while being a Hunter. 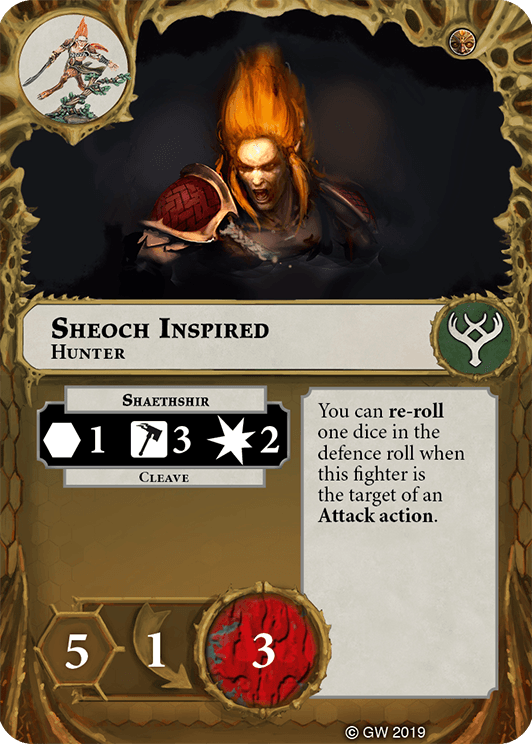 Sheoch inspired goes to 3 smash with cleave AND gets to re-roll 1 dice in the defence roll. Plus he goes up to movement 5.

Althaen is like Tauriel but useful. She has her Seeker Bow which is range 3, 2 smash and 1 damage.

Once inspired her Seeker Bow gains Esnare and the ability to re-roll a single defence dice like Sheoch. She also goes to movement 5 making her threat range an impressive 8.

Lighaen is Sigmar’s Simba. He can’t be given attack action upgrades or hold objectives but he’s movement 5 base. His Teeth and Claws are 2 fury and 1 damage.

Lighaen inspired has his attack go to 3 fury with Ensare. His dodge goes up to 2 but he remains at 2 wounds.

Cards
Now we get onto the card part of my review. As always I’ll be going through the cards I consider alright and then my top picks.

Aspects of Kurnoth is alright but takes 5 activations in general to score early on. Better late game however.

Gifts of Kurnoth is fine but I don’t like upgrades being forced around on 3 different fighters.

Slay the Corrupted just heavily relies on who you’re facing to be good or not.

Cry of the Wild rewards you for blowing that horn. Just keep Karthaen safe.

Hunt’s End shows how great Hybrid objectives can be. 2 glory for having a +4 wound enemy fighter out of action or control +3 objectives.

Kurnoth’s Snare is really easy to score in Beastgrave with lethal hexes everywhere. Score via pushing with cards a driveback.

Ritual Kill requires the opponent to be in an objective hex but that doesn’t stop it from being great.

Run Down rewards you for doing what you plan to do anyway.

Run Through is awesome. Combos really well with Run Down.

Safety in Swiftness rewards you for what you want to do.

Soulbinding is a little difficult while Karthaen is uninspired but it’s still a great objective.

Retrieve Javelin is not a bad card, I just wouldn’t invest in trying to reclaim it after being thrown.

Strike in Concert is fine but just requires a lot of setup.

Binding Wind is Transfixing Stare with more range. Cast on a focus but worth the cost.

Healing Breeze is great for a group heal, just remember it effects enemy fighters as well as your own.

Might of Kurnoth provides extra damage. Lasts the whole round which can be used to great effect with a range 2 fighter and with objectives that relate to damage characteristics, remember it even lasts through the end phase too.

Fleet of Foot shows how fast those pesky Aelves are. Power step moves!

Hunt in Concert is great for covering ground or capturing objectives.

Pounce requires setup but a 3 hex push is very tasty.

Song of Swiftness gives +1 move to your whole warband for the entire round. Same tricks as Might of Kurnoth apply here.

Swift as the Wind. Combine with Fleet of Foot for an effective free move.

Battle Cry just requires too much setup and is an action to boot.

Eye of Kurnoth provides a lovely +1 attack dice. Against a Quarry you gain Ensare too. Remember this is a Hunter-only objective.

Hale Charm is another Hunter upgrade but -1 damage is just so good.

Hunting Aspect transforms Lighaen into the Battle Cat he was always meant to be. 7 move, 3 wounds, 3 dodge fighter. Fear him!

Kurnoth’s Mark is Champion’s Fortitude but you can equip it for free if an adjacent enemy is taken out of action by the attacker. Noice. Hunter only.

Shield Slash for when that Javelin disappears. 2 smash and 3 damage is lovely.

Check out my Beastgrave core set review for all the currently available Beastgrave only universal cards that are released at the moment.

Once again the deck uses the foundations set by the faction cards to provide a solid base to switch-up between hold objective play and aggro play mid-game. Snare gives extra damage while Supremacy boosts that glory. Great Strength allows Skaeth to really mess people up.

Using the Beastgrave-only deck as a basis I’ve swapped in Nightvault cards to bolster the effectiveness of the deck. Calculated Risk and Fired Up are easy glory. Sphere of Aqshy adds extra damage and the Abasoth spells just provide extra utility. Transfixing Stare pins targets in place while Tome of Offerings allows Skaeth to do terrible things with his Scything hooves.

Skaeth’s Wild Hunt are a very forgiving warband with a low skill ceiling. They do a lot of things really well but still have drawbacks in relation to durability and inspiring. You have to balance out when to charge and why so fighters aren’t left alone and exposed.

With that we’ve reached the end of the hunt. Skaeth’s Wild Hunt are another warband I’d recommend. They’re fun and straightforward yet still have enough depth to do crazy things with. New players will find them great to learn how to play Warhammer Underworlds Beastgrave while old players will enjoy the evolution in warband design. If you want to get Skaeth’s Wild Hunt you can buy them here.

So sound your horns and ready your gear, let’s go play Beastgrave with no fear. We don’t venerate a monstrous mountain, only crits!

One thought on “Skaeth’s Wild Hunt”