Welcome to today’s article where I’ll be delving into the deep and complex topic of glory denial. In Warhammer Underworlds decks are built to score as much as possible, although the true secret to winning is to score reliably while preventing your opponent scoring any glory. After all achieving high glory scores are pointless if you let your opponent do exactly what they want to do.

First you need a reliable objective deck. There’s almost no point in shutting down your opponent’s ability to score glory if you can’t capitalise off it unless you’re looking for a stalemate. You’ll also need to be fairly experienced with Warhammer Underworlds itself too as this is not an easy strategy. Trying to attempt this as a new player will only help frustrate you but this is perfect for experienced players trying to improve their gameplay level.

Glory denial is the key step for absolute victory, it’s what me and other experienced players use to win many of our games. When combined with an efficient deck and solid gameplay, it makes an almost unbeatable combination. To become truly successful at Warhammer Underworlds you need to be able to score all your objectives while preventing your opponent from scoring theirs’.

A simple way you may have already done this is via aggro and wiping out your opponent’s warband. It’s crude but a simple example. Remember your opponent can’t score glory with no fighters, unless they’ve designed their deck to! An easy example of counter-play is Martyred. You may try to wipe out your opponent but now they’ve scored glory and an objective off of your attempt to shut them down. However you can then play against this by biding your time to see how long your opponent with Martyred is willing to wait for you to kill their fighter which is especially useful against warbands like Thorns of the Briar Queen who are dependent on the opponent to kill their fighters.

The reason glory denial is difficult is because it requires you to have a deep understand of your opponent and the game. You need to be able to read your opponent, understand what they’re trying to do and have the knowledge as to how you can play around their objective cards and playstyle to prevent them achieving any glory. Knowing the meta helps too but then you have to be wary of the trap that is assuming. Making assumptions in situations like these can cost you crucial games in a best of 3 match if you end up being wrong.

Let’s go with some examples:

Not so complex is it? And it is fairly easy at face value until you include your opponent’s ability for counter-play. Cards like Regal Vision and Blazing Soul ensure Fired Up, Sidestep and Restless Prize can produce a surprise Supremacy whereas Denial can be protected with good old aggro. You need to be able to recognise how you can stop your opponent scoring objectives AND what they can do to counter you countering them.

The Control playstyle is what strongly overlaps with Glory Denial and its principles. Outside of the simple not engaging with the opponent (which really hurts aggro players as you generally can’t kill what you can’t reach with charges) there’s a whole load of depth outside of the reliance of cards and sitting back doing nothing. This includes stuff like controling where and who your opponent kills, what directions they send their fighters due to board configuration and baiting them out when trying to score specific objectives.

A good example of baiting is once again with Martyred as mentioned earlier. Horde warbands like the Grynwatch and the Thorns of the Briar Queen usually want you to kill their fighter first but by holding off from killing, especially when it doesn’t synergise with your objectives, can force the opponent to waste time from actually killing your fighters while also bricking their objective hand. This can be especially devastating in the 3rd round.

Another example is Path to Victory. Say your opponent is playing Thundrik’s Profiteers and scores the objective in game 1. Game 2 you now remember this. After taking one of your fighters out action, the opponent begins moving their fighters onto objectives. Instead of targeting other juicy targets you keep aiming to attack their fighters on objectives as you don’t need to kill, just hit in order to drive back. This is excluding the counter-play of power cards but if successful you deny your opponent 2 glory as well as an end phase objective. With the 6 Surge objective limit stalling out an end phase objective is huge, especially with objectives worth 2 or more glory. 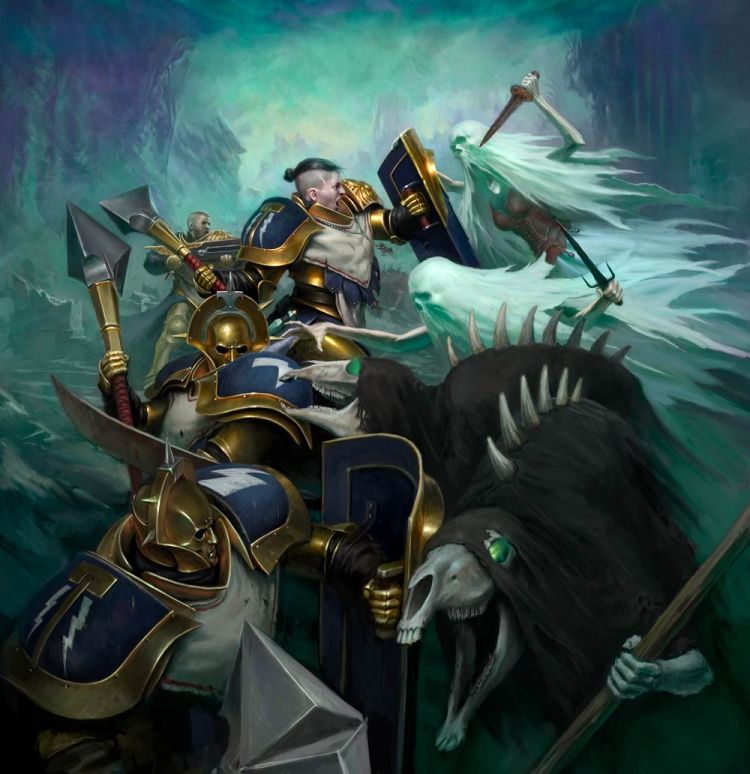 Glory Denial really is a huge and complex topic, I’ve only scratched the surface but what is written here will be enough to get you started and familiar with the topic. It’s an advanced skill to master, let alone learn, but once you have you’ll be truly dominating the game. Trying to deny your opponent from scoring objectives and glory while still successfully scoring your own is not an easy task and poor implementation of it can cost you the game. It’s all about risk vs reward, the risk of shutting yourself down against the reward of shutting down your opponent.

I’ll most likely be revisiting this at a later date as this subject matter is very deep. Even for myself it took me about a good 10 months of playing Warhammer Underworlds and gets more difficult with every new release as things get shaken up so don’t fret if Glory Denial doesn’t come to you quickly. The key things that helped me where: practice, regular tournament attendance and sticking with the same warband (Spiteclaw’s Swarm 💞) for over 6 months.

That’s it for today, so keep your opponent’s glory denied and your power to roll crits ever strong!