I’m back at the tournament scene! Beastgrave has roused my slumber and once again my journey to win with all available warbands begins anew. Today I’ll be going over my recent tournament at Chaos Cards in Folkstone. This time I started with the first Beastgrave warband; Grashrak’s Despoilers.

I had last played at a proper tournament back in August at the Tabletop Scotland 2019 Grand Clash. Since then I took a rather long break, about 8 weeks to be exact! I just lost my drive to play in tournaments plus I was very burned out. I played at the Bugman’s Skirmish a week prior to this event but that was more a casual affair, although commentating the October 2019 Grand Clash kinda reinvigorated my tournament spirit. Since then I refined the deck a bit, its test would be at the store tournament! 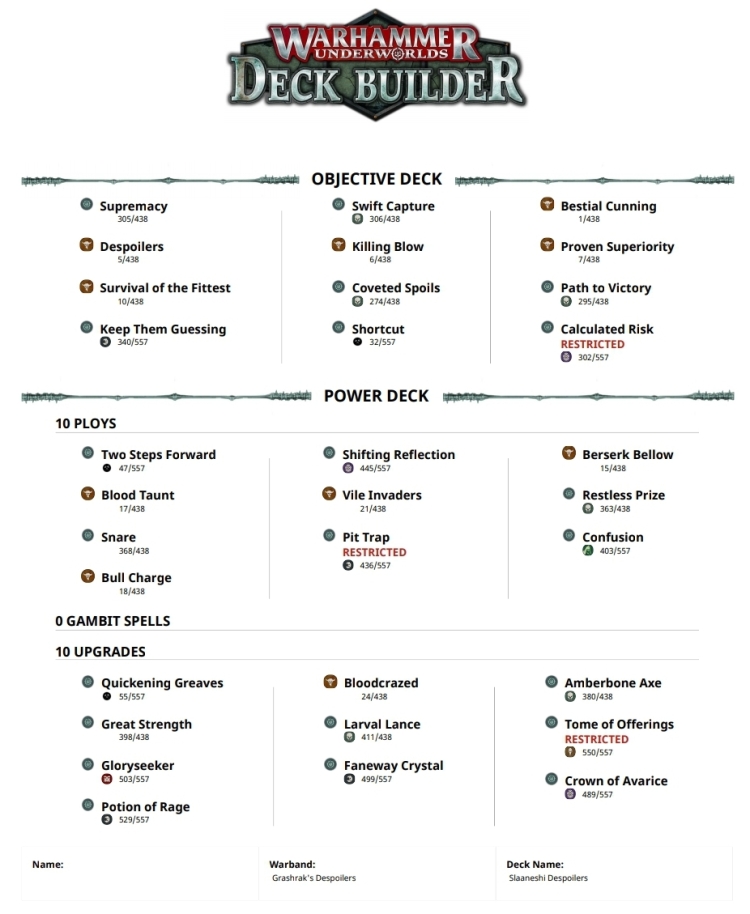 It’s quite a flexible build. Originally was more aggro focused but toned it down after the Bugman’s Skirmish. I dropped Trophy Hunter for Potion of Rage as I was too reliant on Draknar. Thanks to advice from my good friend David Smee (Underworlds’ best stat man and one of the best UK players) I dropped Madness Dart for Shifting Reflection and Conquerors for Coveted Prize. Shifting Reflection helps score Shortcut as well as Swift Capture and brings in safe enemy fighters from across the board. Coveted Spoils was the big one. Basically punishing opponents for sitting on objectives to always give me 3 glory.

Shortcut and Keep Them Guessing work reliably thanks to Korsh’s fighter card action. Despoilers is amazing and Supremacy helps the glory train. Proven Superiority is a favourite of mine as I’m happy to focus down on the enemy leader for a 3 glory swing. Survival of the Fittest is just amazing, punishes opponents for killing you or dying too easily. Calculated Risk is a no-brainer.

Gambit cards are all a mix of push cards and aggro cards. Confusion helps for sneaky objective grabs and Shortcut. Restless Prize does a similar job. Snare and Pit Trap help me easily kill 4 wound fighters while Bull Charge gives me the amazing innate fury which is busted when combined with a ritual counter re-roll.

The real strength of the deck comes from ritual counters. They give you a re-roll for a single attack dice. I use them whenever I’m in a position to kill an enemy fighter. As long as the attack actions ends up with the target dead, using the ritual counters as soon as you have them helps make reliable kills and speeds up inspiring. Don’t be afraid to use them.

Usually Chaos Cards attracts large crowds but this time only 4 people turned up including myself. We had just enough players but instead of doing 5 rounds of best of 1 as planned or cancelling the event, they continued doing 2 rounds of best of 3. It was unfortunate but I was happy the event wasn’t cancelled, still the regular players who had turned up were seasoned Underworlds veterans.

Tragedy had also struck on the way to the tournament as my bottle of water leaked all over my bag and Underworlds stuff. Luckily everything was saved. Boards were kept intact thanks to my neoprene laptop case and my Ultimate Guard deck boxes kept my cards dry. It helped with a product review I’m writing but that’s for another day soon 😉

First up I was against Melissa and her Skaeth’s Wild Hunt. Losing the board roll Melissa let me place first. I chose the Shyisian Stardial while Melissa set the Wrymgrave in wide configuration.

Phase 1 was pretty even while we all moved up. I missed out on Coveted Spoils but Keep Them Guessing and Supremacy while Melissa got Keep Them Guessing. With glory and priority, Draknar charged Skaeth. I used a ritual counter but rolled double crits! With Gloryseeker and Tome of Offerings, Skaeth died to score me 4 glory thanks to Killing Blow. This lead into Proven Superiority. Phase had us even on numbers as Draknar was killed after his triumphant kill. Still I moved up to score Despoilers and simply survived to score Survival of the Fittest for a 16/12 win.

Game 2 had me lose boards once again but Melissa let me place first. I placed the Penitent’s Throne while Melissa set the Abandoned Lair wide.

Starting off I used Korsh’s action to place him on objective 1 and score Shortcut. I then used Confusion after Melissa’s activation to swap Draknar and Ushkor. I then played Two Steps Forwards and pushed Grashrak and Ushkor onto objectives 4 and 5. Ushkor went on guard and I scored Despoilers while drawing into Supremacy. Sheoch had charged in and missed so I used Ushkor to attack him back, rolling a fury and support to drive him back into a lethal hex and play Pit Trap to score Bestial Cunning. After a move action in my last activation I scored Keep Them Guessing and Supremacy. Phase 2 had Gloryseeker Draknar charge in and kill Skaeth with a crit and a smash. He died again in return. I used Restless Prize to move objective 2 within range. After Vile Advance I moved Murgoth onto objective 2 and scored Swift Capture. There wasn’t much to do in round 3 but I reached my goal of having 5 fighters out of action to score Survival of the Fittest and win 15/8.

Next up was Duran and his Zarbag’s Gitz. He won boards and placed the Shattered Refractor first. I set the Molten Shardpit wide in response, it was aggro time!

Winning priority I almost gave it away until I remembered Draknar was damage 3! I charged into Snirk and burned a ritual counter. I rolled 2 smashes after a re-roll and he rolled a single block. I scored no objectives but now Snirk was dead, phew! Gnarl shot at a Squig while Draknar ended up being mobbed by Gitz but surviving due to poor Gitz dice and my crits. After a move action and then using Korsh’s action to place Korsh next to the pyramid blocked hex which scored Shortcut, Duran charged a Squig in but I rolled a crit to defend. Duran deployed his counter push cards of Centre of Attention and Irresistible Prize. Thankfully I had Two Steps Forwards and Restless Prize which gave Korsh objective 5. Then I used Shifting Reflection to swap Grashrak and Stikkit who were on objectives 2 and 3 respectively. This ensured I got Coveted Spoils, Keep Them Guessing and Supremacy for 8 glory while Duran got Mad Scurry.

Phase 2 had Draknar finally die to inspired Zarbag while Grashrak charged and failed to hit a trapped Redkap with my Amberbone Axe and Tome of Offerings combo. Korsh was able to get a kill before dying to score me Path to Victory as I used a sneaky confusion to get Grashrak onto objective 1. Phase 3 had Grashrak finally kill an adjacent Gitz for 4 glory with the Amberbone Axe and Killing Blow. Thanks to Survival of the Fittest I ended up winning 21/13.

Game 2 had me win board so I instantly went to place first. I chose the Shrine of the Silent People and Duran did the same, setting them wide.

Once again I won priority and went for the charge with Draknar, using a ritual counter as I did so. I rolled a crit and a smash naturally so Snirk died again, scoring me nothing but clearing a huge threat again. Korsh used his action to place himself on objective 5 scoring Shortcut. I had spaced out my fighters and objectives to nullify Irresistible Prize and Centre of Attention. Grashrak moved up and made an attack action after Zarbag failed to hit with his charge. Duran thankfully used Restless Prize to control the 2 objectives in his half. This allowed me to score Keep Them Guessing, Supremacy and Coveted Spoils.

I lost priority and Grashrak died to Zarbag but I scored Despoilers. Murgoth attacked back with Blood Taunt and killed Zarbag who had Sudden Growth thanks to Snare, Pit Trap and a lethal hex which scored me Bestial Cunning. After scoring Path to Victory, I went on more of a killing spree to get Survival of the Fittest in action phase 3 for a 24/11 win.

I had already won by this point due to being the only undefeated player and impossible to lose. Still played a 3rd set against regular opponent Andrew. It was a bit rushed so no board pictures.
Game 1 had me lose the board roll but end up with 3 objectives anyway. Andrew went for a diagonal configuration using the Molten Shardpit. Still I was able to maximise my 3 objectives for lots of glory. The game came down to a risky charge with Grashrak. My attack failed with Potion of Rage and cost me the game, losing 14/16.

Game 2 had a similar board setup. Things were pretty close at first. Andrew used his 3rd activation to move Vortemis in range of an objective I was holding. He failed cast Abasaoth’s Unmaking. Draknar charged in with a crit and a smash, finished off with Pit Trap to score Bestial Cunning. In the end phase I scored Supremacy, Coveted Spoils and Path to Victory to put me 10/0. We called it there and moved on to the next game.

Game 3 was another early close affair. I managed to kill K’Charik in action phase 1 with Draknar to score Killing Blow and end on Keep Them Guessing with Path to Victory. Phase 2 was a neutral affair again but I managed to get all objectives held to score Coveted Spoils. Phase 3 had an inspired Ushkor kill Vortemis with Snare and Pit Trap which allowed me to score Despoilers, Proven Superiority and Survival of the Fittest to end on a 19/8 win. 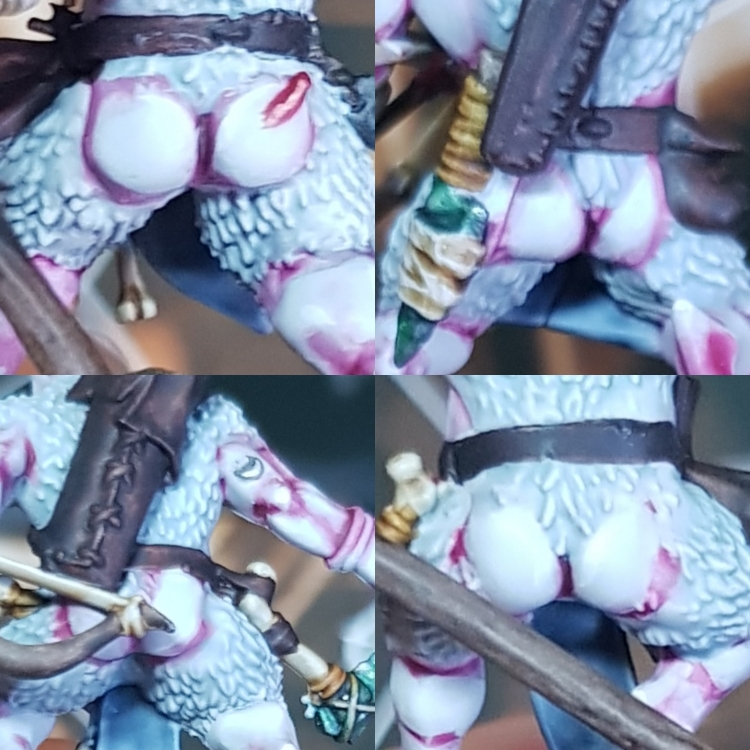 After all that my Slaanesh Grashrak’s Despoilers had won! It was tough but Coveted Spoils and the strong faction cards of the Despoilers allowed me do some crazy things. Ritual counters were the key to most of my games. The deck was packing a lot of damage and it was needed. Bull Charge makes the Ungors such a reliable threat. Korsh was the MVP as his special action coupled with cards like Confusion and Restless Prize allowed him to grab objectives from afar.

Once again the tournament was ran really well. I highly recommend Chaos Cards in Folkstone if you’re ever in the area. It’s a really good store with a great gaming space and awesome local players. I’ll also say the new acrylic tokens are really nice. The Beastgrave Organised Play double-sided move and charge tokens are a huge improvement over the Nightvault ones. So good.

That’s it for now. I’m back in the Beastgrave with Grashrak’s Despoilers out of the way. I’m trying to paint all the warbands that I’m attempting to win with but that probably means I’ll be using the Grymwatch over Skaeth’s Wild Hunt. Who knows what I’ll use next. Perhaps the crits will show me the way.