Shadespire Warbands in a season 4 world.

Greetings and welcome to another guest article, this time by Derek T, the captain of Canada and all about his suggested buffs for the Shadespire Warbands. As a quick reminder: these are all just his own thoughts and ideas, not a reflection of my own. I have my own ideas as to what I’d do with the Shadespire warbands but Derek came to me with an interesting topic that I think is worthy of sharing and discussing with everyone today. So with that out of the way, I’ll hand you over to Derek. 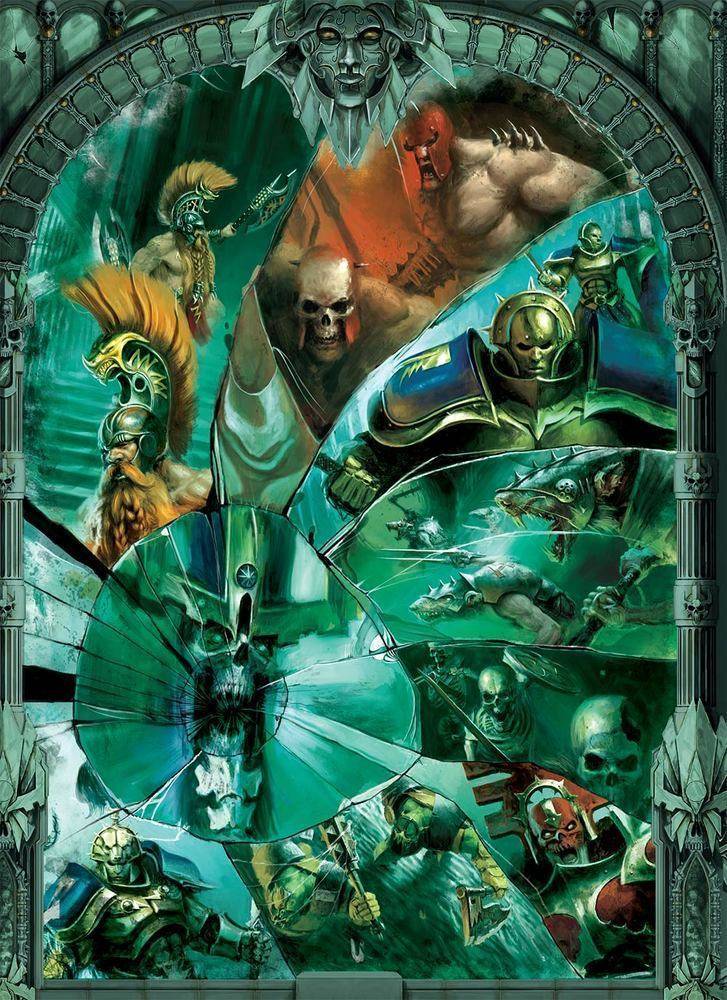 When Underworlds was first released, Games Workshop astutely made the most iconic armies as their first series of teams. These are the ones that the most people would be interested in and, hence, buy the game. This is all well and good, but as the developers themselves have stated, they were still learning what would be strong and what would be underpowered. To their credit, for shooting in the dark like they were, Underworlds has maintained its streamlined form and is amazingly balanced. With that in mind, those iconic teams from Shadepsire are a bit lacking when it comes to the current game. With Season 4 around the corner, this provides the perfect time to update Season 1 to the new mechanics while keeping them in line with Season 2 and 3 teams and, of course, some new models!

First, in every case a few “booster” cards will be released with each improvement. Calling these a “Mirrored City Reinforcements” card pack or something similar. Perhaps a gift pack for 2020?

Second, does the team need adaptation to new mechanics? Extra models? A slight tweak to rules? Each team is unique and so needs a unique solution.

Third, Balance! This may be a bit of a “wishlist” but the balance of this game and the fun of its core design are important. So keeping things fun for season 1 teams AND season 2-4 is important.

The original poster boy of the Mirrored City, Severin Steelheart’s Champions have been on a rollercoaster throughout their run. Sometimes being near the top, and sometimes being derided as boring and unplayable in the current game. With the inclusion of Ironsoul’s condemners, they seem even more lackluster. So, how do we fix that without making these already strong-stat warriors overpowered? We address their biggest weakness – mobility.

This can be done by simply including a few power cards to increase their movement. An in-faction spectral wings, a two hex sidestep, and an in-faction Faneway Crystal or other Hysh based teleport would go a long way to allowing the OG Eternals to keep from turtling and score objectives and kills at the same level as their Beastgrave Counterparts. 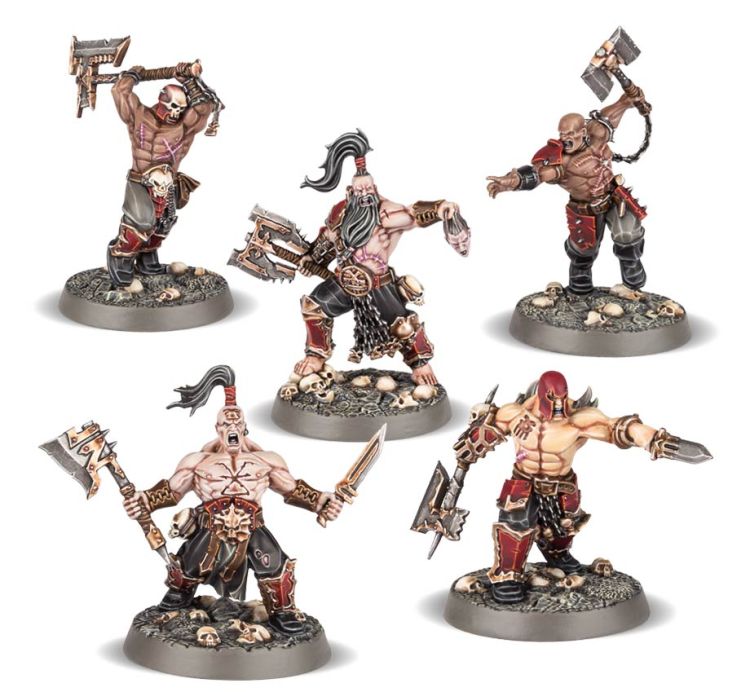 The antithesis of Steelheart. The Reavers embody fast moving and fast dying. There have been some great uses of these guys over the last couple seasons, even winning a Grand Clash out of nowhere! The Reavers can be compared to the Godsworn Hunt or Grashrak’s Despoilers and come close, but they lack the one thing that makes their fellow Chaos teams awesome – support.

I propose adding a Slaughterpriest/Bloodsecretor type model. Something that, like Grashrak, can give a small boost to your team and bring them up to that 6-model number which would put them in line with their aggro peers. The model wouldn’t need to be huge (perhaps 3 wounds with a 2 smash/2 damage attack) but would have the ability to grant a reroll or add damage to the rest of the Reavers attacks.

Da boiz! For such character and such wanton brutality, and being such an iconic warband, Gurzag and his Boyz not being on the table is unacceptable to my WAAAGH!!!-loving heart. Now, many of us are looking forward to Morgok’s Krushas, but I don’t think we should forget the original Greenskinz.

A new model is the answer to this one too. I suggest a Warchanter or a Weirdnob Shaman. Both Models are Ironjawz in AOS which makes them suitable for the Boyz, and if we take inspiration from their AOS rules, this model could be a Wizard with a spell action or power cards that add an additional hit or additional damage when the boyz roll a Crit on their attacks. This would allow Ironjawz to flex a bit into magic abilities, make even Hakka and Basha more of a threat, and that new model would make this 5 model Boyz-Band as good a choice as the new kidz on the (Underworlds) Block.

Grand Alliance Death teams have done a great job becoming the signature “Hold Objective” warbands. Sadly for Deathrattle fans, the Ghosts and Ghouls have left the Warden and his Guard far, far behind. Adding in an in-faction “Temporary Victory” would help and should be a part of this, but we want to keep in the vein of new models and mechanics. Enter: The Necromancer. A 3-wound Wizard with a Spell Attack and some additional gambit spells to help move your petitioners and named skeletons onto their objectives or other key hexes. By making this a 8 model warband, the Necromancer could then replace a petitioner (keeping the petitioner off the board -or in the ground- as reserve) and have a spell action that allows him to raise a model on any starting hex similar to Skritch or Vortimus and opening a large amount of gameplay options.

Skritch is the Greatest [200% fact], Yes yes! This was one of the hardest teams to decide on an improvement on. Since they are still semi-viable depending on what diabolical mind is fielding these dastardly rats. So how do we utilize the new game mechanics but not make the Swarm able to overrun the field? Whats more, Clan Skyre, Eshin and the rest deserve their own teams in the future, so keeping this crew as generic skaven is important.

The answer: a 2 wound Grey Seer apprentice. This Wizard would have the ability to open-up some new options for Spiteclaw, and I would love to see Skaven staple spells such as “Skitterleap”, “Death Frenzy” and “Warp Lightning”. Add a proviso that if he suffers 2 damage due to backlash (Skaven Magic is finicky after all) and you have another model/tool that will be fun on the table but not oppressive to the rest of the field. 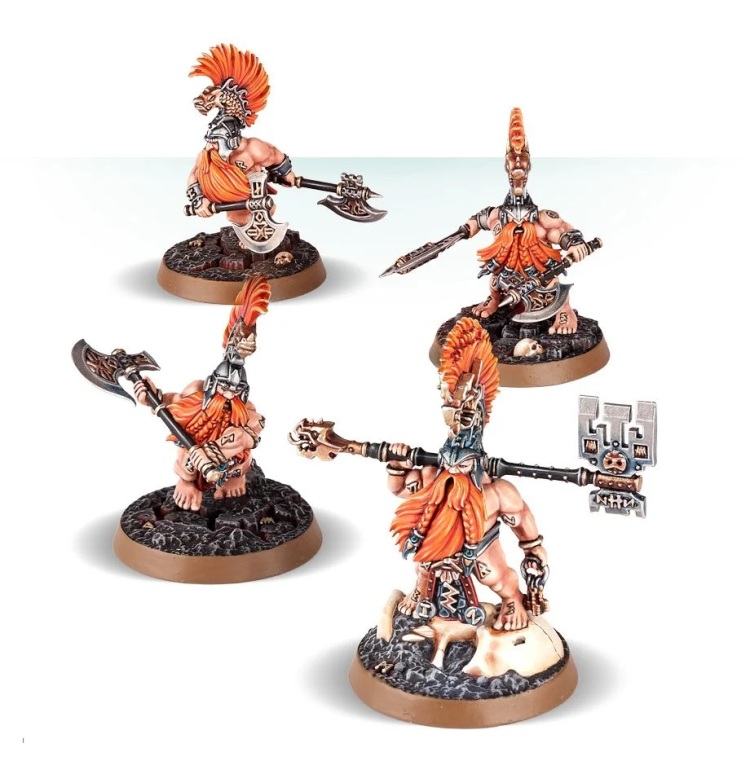 In comparison to Spiteclaw’s Swarm, deciding on what to do for Fjul-Grimnir and the rest of Vostarg Lodge was easy. Their chief weakness is their inspire condition and low movement, but keeping in the theme of the warband and the Army at large was surprisingly simple:

Call in a Runemaster! Even though the Auric Runemaster of AOS is not a wizard there is an argument to use the spell mechanic for a Lvl 1 wizard Runemaster in Underworlds. A spell action would be perfect for this model called “Rune of Inspiration”; 1 Channel to cast which inspires the Runemaster or an adjacent model. Although fairly reliable, the need for models to be beside the Runemaster for it to be cast and the extra model will ensure the Axes don’t keep getting the short side of the stick.

The Stormcast Vanguard have long been relegated to C-tier play. With their strong fanbase and good models, I’ve always felt that their lack of use is a shame. But how do we improve these Vanguard Hunters now that they are in Beastgrave?

Yeah, this is an easy one: The Vanguard Hunters are HUNTERS! This simple keyword addition would open-up a bevy of opportunities for the team. With snare, tracking and trophy belt fast becoming staples. Another idea is to include a 2 wound Gryph-Hound model like Grawl. I always though that Vanguard should have both their usual animals on the pitch, and a little buddy to go with Sanson’s Star Falcon seems ideal. Do the Farstriders need both to be viable? Probably (definitely!) not. But if we are going to go to all the trouble to suggest improvements, we are going to have fun with it!

Make Aggro Great Again! The Fiends have been my first choice in murder, and I must admit, they really do not need help. Upgrade or Gambit cards that give +1 attack dice standard/+2 attack dice vs wizards would make Khorne happy, but I would like to make one small thematic change for the murder crew: Magic Defense. It will not come up every game, but Riptooth has his Collar of Khorne on the model, and with the above Wizards being added to the game, it is worth it to make this small change to the team. If a wizard casts a spell while Riptooth is on the pitch, the Magore Player may roll 1 dice similar to a defense roll with Channel being the defense stat. Plus, we need to give GW the opportunity to sell something as a part of this, so buy your $20 Collar of Khorne dice today!

If you have read this far – or more likely read your favorite warband’s entry and then decided my idea is stupid – I would like to hear your idea. Do Season 1 teams need the boost? Do you reject the idea of paying for a single model and booster pack? Do you have a different idea? Fan wishlists with enough noise do get attention in this day and age of social media and one of the greatest things about Warhammer Underworlds is that the developers are listening to us. Let’s hear your ideas and hopefully we can see these iconic teams back on the pitch!

There you have it. Derek T’s thoughts about buffing the Shadespire warbands. Agree? Disagree? Let me know! Personally I still think a lot of the Shadespire warbands are still viable and needle little to no tweaks (pray for Gurzag). New models are an interesting idea but have a tendency to break warband cohesion for better or worse. I believe most need some new cards to keep them on-level with the Beastgrave warbands as a lot of design concepts have changed from Shadespire to Beastgrave. Also bring back Time Trap. So until Ironskull’s Boyz and the Chosen Axes leave their retirement homes, remember to keep rolling crits!

12 thoughts on “Buffing the Shadespire Warbands”